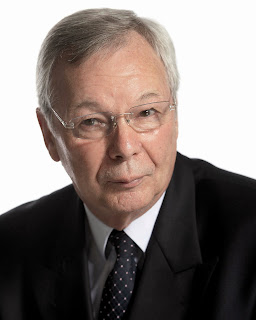 The headmaster was thoroughly disappointed with him! He never did well in his studies in school. He tried hard but would not be able to impress his teachers. Ironically his headmaster wrote on his report card, “you are destined to be a life’s failure!” This would hurt any youngster, it also hurt him a lot, but how many of them take it in their stride and accepts that as a stimulus to change and carve themselves a future? He accepted the challenge and indulged in a mind boggling effort to become an achiever. It was a stimulus that changed his life and provided him the reason to endeavor in achieving success. He had the will to refrain from being a school dropout and at a rather late age of 27 years he entered University. His first brush with the Labels was when he joined TIRA, the paper printing Organization for whom he successfully organized the first event, a conference. That was his entry point into the world of labels in the year 1974 for Mike Fairley!!! With awe referred to, as the international Label Guru!
At the last Finat Congress held at Antalya, Turkey Mike Fairley was unanimously selected as the winner of the prestigious R. Stanton Avery Lifetime Achievement Award. Widely regarded as the label industry ‘guru’, Mike Fairley has been writing and talking about Labels for more than 30 years. In the year 1978 he founded the Labels and Labeling magazine and the Cowise International Publishing Group both of which are now a part of the Tarsus Group PLC. Mike has been a successful industry consultant, he has consistently been at the forefront of introducing the latest innovations in label materials, technology, markets and applications, as well helping label industry supplier and converter companies to implement their education, training and marketing strategies.
Sometime between 1978 and 1981 I was in England and came across the magazine labels and Labeling. I was immediately interested and wished to subscribe for the magazine. In those days of strict foreign exchange regime it was not easy to send money outside India in foreign exchange. Such was my wish to get this magazine that I found my way to Mike’s home in North of London and when I knocked at his door he was surprised that someone from India came all the way to find how he could get the magazine each month. From that small interaction I remembered him as an extremely pleasing personality. I met him twenty years later at Labelexpo Asia in Singapore waiting for taxi at the end of the day. Mike was the same the pleasing and smiling person ready to help and offered me to take the next taxi before him.
Thereafter I have been a close friend of Mike. I have always felt richer in my knowledge of labels each time after having met him and shared our thoughts about the industry. It makes me happy and proud that Mike is the recipient of the R Stanton Avery Lifetime Achievement Award. This award will be conferred to him at the “Gala Dinner” organized for the World Label Awards ceremony on the 23rd of September 2009, in Brussels. The Labelexpo 2009 also begins on the same day. I am in awe that Mike Fairley continues to stay abreast with all the new developments in the industry around the globe. Having achieved tremendous amount of success, fame, appreciation and recognition… he continues to be modest. We wish him good health and look forward to many many more years of guidance to the Label industry.
Written by Harveer Sahni, Managing Director, Weldon Celloplast Limited, New Delhi-110008 http://www.weldoncelloplast.com/
Posted by http://harveersahni.blogspot.com at 6:26 AM