Pack Plus provides Label Printers the opportunity to showcase!

In 2002 Anil Arora launched his maiden trade event “The India Label Show”. The show was a great success and kept on getting bigger with every edition. In 2007 this show was acquired by UK based Tarsus Group who later renamed it as Labelexpo India. It became a part of the chain of shows branded as “Labelexpo” held around the world. Anil launched many shows thereafter, India Packaging Show, India Converting Show, India Flexo Show, India Corrugated Show, Food Technology Show, Pharma Technology Show, India Automation Show and India AIDC Show. 2009 saw the amalgamation of the 8 niche shows with the additional strengths of India Retail Show and India Logistics Show giving rise to the Total Packaging Processing and Supply Chain Event- “Pack Plus”. According to Anil,” The 2010 edition of PackPlus to be held at New Delhi’s Pragati Maidan from 3-6 December 2010, will be more technology driven and will showcase more exhibitors, value additions and business avenues than ever before”.

Anil’s first show India Label show was targeted at label printers with suppliers of presses, materials, consumables, equipment for pre-press and post-press, etc. as exhibitors. Label printers were always the visitors to his show. In contrast Pack Plus is meant for the end users like FMCG, Pharma, Food and Package using companies. This time the end users are the visitors to this show. The show has been aggressively promoted to these companies. Anil realized that the visitors to Pack Plus who are the buyers of packaging materials, are also buyers of labels. The visitors to his first show, who were the Label Printers, could be prospective exhibitors as now the visitors to this show were their prospective customers for them! 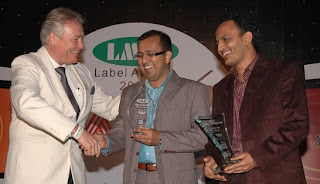 Anil Arora and his team noticed the void. The label printers had no platform to exhibit to prospective customers. They could exhibit generally at Pack Plus but in a big show the printers felt they would be lost in a crowd. The Pack Plus show now has decided to create a separate area only for Label Printers to exhibit and effectively promote their offerings. I feel it is a very good move and will give good exposure to the label industry. It is time when we in India agree that to sell more, we need to showcase. The label printers need to do the same, they needed the platform, and it is there now, thanks to Pack Plus.
Written by Harveer Sahni, Managing Director, Weldon Celloplast Limited, New Delhi-110008 15th October 2010
Posted by http://harveersahni.blogspot.com at 10:23 AM