As we came to the end of 2010, the last month of the first decade of a new millennium, December 2010, saw hectic activity in the printing and packaging industry. The winter chill had started to descend in the capital city of Delhi. The wedding and party seasons that starts around Diwali festival time, was reaching a crescendo. At this time another set of events also began to unfold for our label industry, more so for the printing industry at large. A series of exhibitions and related events were to be held in New Delhi. The mood is generally is festive and upbeat at this time of the year. The way we look forward to meeting friends and relatives at weddings, we also are excited to meet industry colleagues and business friends at the trade related events. This is a time to meet, network and renew relations with fellow printers, material suppliers and equipment suppliers. It gives us the opportunity to update our knowledge of new developments in the industry. It is also time to plan expansion after witnessing the latest equipments and products on display.

On the 3rd of December2010 PackPlus India 2010 opened in Pragati Maidan, New Delhi. It was a fairly big show incorporating many different segments of the packaging industry. The visitor profile was extremely diverse and left many exhibitors confused. Even though the organizers had earmarked areas to different segments yet the intermingling of visitors does take place and exhibitors end up spending time on visitors from unrelated industries. While on one hand printers were exhibiting on the other hand there were other printers visiting the show. Similarly packaging product manufacturers were at the exhibition as visitors, looking for equipments and material suppliers while as exhibitors they were hunting for end user customers. Even though the show was successful with over 11000 visitors, yet the need for having more focused shows is becoming evident as the packaging industry continues to grow. Interestingly, end user packaging buyers who normally come looking for suppliers of packaging materials and packaging machinery were seen rubbing shoulders with some of their own vendors as visitors to the show. I guess the organizers saw the need to have a focused visitor profile and for this reason they have split the next edition of the PackPlus into three different shows at three different locations across India. On the sidelines of PackPlus, “Package” conference was held at the same venue. Some of the presentations made were of truly international standard. The All India Food Processors Association also organized a one day conference on “Inclusive growth of food processing industry” during this period at the same venue in association with Printpackaging.com. 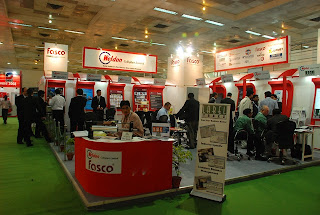 After a gap of just one day, Labelexpo India 2010 was inaugurated yet again at Pragati Maidan to run from December 8-11, 2010. There were some common exhibitors who just had to move from one hall to another. For them it turned out to be one their longest showing as exhibitors at one venue from 3rd December to 11th. Labelexpo India is organized by UK based Tarsus group as a part of the Labelexpo series held around the world. A highly focused set of shows aimed at the label industry worldwide. The exhibition was extremely successful and left the visitors and exhibitors happy and satisfied. The show was of truly international standard. Renowned suppliers from around the globe were exhibiting and displaying the latest label printing and converting technologies. The international press manufacturers  who were present with working presses included Mark Andy, Nilpeter, Omet, Rotatek, Gallus, Xeikon, HP, Orthotec, BangSung, etc. Indian press manufacturers put up a smart show as well. Leading from the front was Multitec with an all UV multicolor press running to perfection, others who also showcased their products include Jandu, RK and Apex Rototech. Presence of renowned dignitaries, in the field of labels, added value to the show. Mike Fairley-The label Guru, Jan Fredrik Vink-Past President Finat, Taco Zevenbergen-Finat, the entire Tarsus team, other members of Finat Young Managers Club, etc. were seen mixing and conversing with Indian printers at the show. On the sidelines of the Labelexpo a joint FINAT/LMAI YMC meeting was held at The Meridien Hotel on 6th and 7th December 2010. It was a networking event cum conference with inspiring presentations from noted speakers Professor A K Murthy and Professor Parimal Merchant both of S P Jain Institute Mumbai. The programme was a complete success due to efforts made by the LMAI-YMC President Sandeep Zaveri, General Secretary Pawandeep Sahni, who is also Finat YMC Board member and Taco Zevenbergen-Finat.
LMAI Label awards evening was held on 8th December 2010 at Jhankar Banquet on the outskirts of Delhi. The whole team of LMAI leadership lead by their President, Vivek Kapoor was present to welcome the guests at this gala networking event. Mike Fairley the Label Guru was given the lifetime achievement award. I, Harveer Sahni was honoured for my services as a judge at the World Label Awards. It was an overwhelming moment for me to be given the dais to speak, express my gratitude and thank my colleagues in LMAI for the honour and support. Leading Indian label printers who had won awards for their excellence in printing were proud recipients of the trophies. Though there was some external entertainment yet the printing fraternity rose to the occasion, leading label printers, suppliers and others joined the fun by dancing onstage to Bollywood tunes. The LMAI team under the leadership of Vivek Kapoor had done a great job. No wonder that later in January the entire executive committee of LMAI unanimously voted and decided that Vivek Kapoor and his team should manage the affairs of LMAI for yet another term. On 16th January 2011, India’s largest printing industry event “PrintPack India” opened yet again in New Delhi’s Pragati Maidan. Being a big successful and regular event catering primarily to the offset printing and converting industry, it attracted visitors not only from India but also from most of the neighboring countries as well.
The series of printing exhibitions and events that took place in New Delhi one after the other gave credibility to the title of my column written earlier, “Breathless at Showtime!”
Posted by http://harveersahni.blogspot.com at 10:07 AM