Indian Label Printers make a beeline for the Goa Conference!

﻿ ﻿
History is being created! The first conference being organized by LMAI, Label Manufacturers Association of India, is to be held at Hotel Park Hyatt, Goa in three days time from July 29th to 31st, 2011. The president of the association Vivek Kapoor and his team appear to be a stressed lot in effort to deliver their best, yet in their hearts they are ecstatic! They have worked hard to deliver a great networking event. The response is overwhelming. The industry looks forward to network and gel with colleagues.
When the project was conceptualised, not many believed that they would succeed. Success will eventually be viewed after the conference has been held. I will try and post the complete report with pictures by the end of next week. It is an event that promises to be comparable to the best in the world. Being the nascent attempt by a young association and having reached such levels of success lapses if any need to be overlooked.I personally believe that given the level of commitment the event will leave the world label fraternity in awe.
﻿ ﻿
The target to achieve appeared optimistic, 100 rooms and  maybe 150 delegates and Lo! the result is incredible!!! Rooms ? Not available and God knows how many more are needed... Delegates? The venue can accommodate 180 and it is over 240 confirmed delegates! It is really amazing, there is a a long waiting list. As for the speakers at the conference, it is the virtual who is who of the leading providers to the international label industry. More on that in my post conference report.
﻿ ﻿
Kudos to Vivek and his team! Cheers Goa, here we come!
Posted by Harveer Sahni, Managing Director Weldon Celloplast Limited, New Delhi on 26th July, 2011
Posted by http://harveersahni.blogspot.com at 10:42 AM No comments: 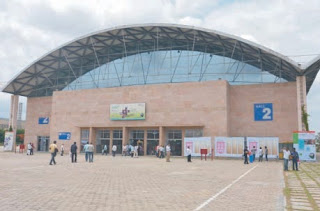 Earlier this month from the 1st to 4th of July 2011, PackPlus South 2011 was held at the Hytex Exhibition Centre Hyderabad. With over 250 exhibitors, the organizers as expected were very optimistic about the success of the show.
﻿﻿ ﻿﻿
﻿﻿﻿﻿

As mentioned earlier by me that, owing to the organisers' past association with the label industry, a sizable presence from this industry was expected.
﻿﻿﻿﻿﻿﻿﻿﻿
﻿﻿﻿﻿﻿﻿﻿﻿

They, the constituents of the label industry, did show up in substantial numbers. The Packaging industry and also the label industry in India is evolving to reach global standards and the consumer product  growth driven by a fast growing young and literate population to amazing levels is yearning to find new and innovative packaging solutions.
It is indeed surprising and a matter of record that a show which was dubbed as a regional show and expected to have limited success turned out to be stunner! Over 12000 visitors came to visit the exhibits on display. It was amazing to see the long ques at the registration counters even close to the day end. This is an evident indication of the development of entrepreneurial endeavors in the interiors of India. Indians are venturing out to explore the avenues they can indulge in.

Label industry also made their impact with not just industry suppliers exhibiting but also leading label printers like Pragati Hyderabad, SGRE Bangalore, Maharshi Ahmedabad, Sai Security Bangalore, GMG Hyderabad and many more were seen displaying their products at their stands at the show.
Industry suppliers like Creed Engineers, Intergraphic, Weldon Celloplast, Reifenhauser, etc were exhibiting their offerings for the label industry.
﻿

On the sidelines of this show a highly succesful and interesting conference "Package 2011" was held at the Novotel Hotel. Noted speakers from acroos the packaging industry made extremely informative presntations. Harveer Sahni, of Weldon Celloplast and Ranesh Bajaj of Creed Engineers were prominent speakers from the Indian label industry. 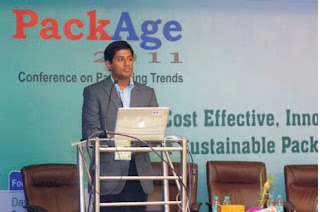 It indeed was a pleasure to hear a young Label printer Hemanth Paruchuri from Pragatipack Hderabad deliver an excellent presentation.
﻿ ﻿﻿﻿