He has reached the pinnacle! Having lead his company Pragati Offset Hyderabad, to unprecedented success, he does not regret that a 12 hour work schedule from 8.30 am to 8.30 pm leaves him no time to socialize. That is the price that he paid for his indulgence in his business. He is happy that God has compensated this adequately by giving him the pleasure of coming back home each evening to a wonderful family where four generations from his father to his grandchildren, live together in perfect tradition of love, harmony and simplicity. Paruchuri Narendra is the driving force behind Pragati Offset, a company founded by his father Paruchuri Hanumantha Rao. 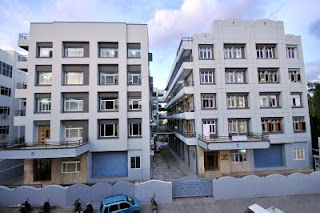 On the 1st of September 1962, Hanumanth Rao who after completing his BA Hons. (philosophy), a short stint as a journalist with Visala Andhra and five years as manager of Sarathi Cine Studios also doing small roles in films out of which some even with the late N T RamaRao, set up a small printing press with one treadle press and three workers. The three men that he employed were a binder, a composer and a machine man. Surprising as it may sound two of these men are still associated with is company even after almost 50 years, though only in advisory capacity.

﻿ ﻿
Hanumantha Rao had some basic knowledge of printing from his time spent at printing detective novels written by his friend Narayana Rao in Chennai. Also he was a quick learner and does not shy from saying that he learnt and grasped well from his otherwise trained workers. He fondly remembers the first job he printed was a folder with Ganesha on it! The first big order that came his way was the 1973 voters list. Thereafter it was always the way ahead to be traversed and soon he bought his first offset press, a second hand single colour OM-4 Russian Offset Press. He vowed to be a quality producer and set standards that would be the way forward for his company. The foundation had been laid and the journey into excellence in printing had begun. It was time to induct more working hands in this business.
Narendra, Hanumanth Rao’s elder son had studied to be a chemical engineer from the University of Mysore specializing in precious metal plating for the watch and electronic industry. On completing education he took up a job in a metal finishing company in Bangalore to get work experience. He was not very happy in that job, he wanted to start a metal finishing unit on his own and moreover his wife Sasikala, a doctor was pursuing higher studies in Hyderabad. Having no money to start on his own, Narendra started to look around for other avenues. At that point of time he requested his father to show him some other successful printing press. Once he had evaluated the printing business, Narendra gave up his plans to pursue the plating business and finally joined his family business in 1978. There has been no looking back ever since. A turning point in the journey of this enterprise came when they bought a photocomposing machine, which was the first one that any company bought in south India besides the printers of the daily south Indian newspaper, “Hindu”. Composing, until that time used to be the biggest of bottle necks in their business, given the short runs that they were doing for customers. This installation brought all the advertising agencies in the city to their doorstep. With this came a windfall of orders and it was time to expand yet again. They decided to buy a new single colour Dominant press. Those days licenses were required to import and Narendra’s father fondly remembers that the day his grandson Harsh was born, they applied for the license. In 1985 Pragati acquired their first four colour offset press but they were formally considered big league when in 1991 they announced the installation of a Komori Lithrone 5 colour 40” press to be inaugurated by Mr. Kasturi, the owner of “Hindu”. Pragati was now into printing of posters, catalogues and other commercial printing jobs. They continued to expand and grow thereafter also making their foray into folding cartons. In 2006 Narendra and his team saw the potential and growth in labels. This made them to decide making investment in that area as well. As they had already ventured into producing cartons for some large customers this label business was in synergy with what they were doing and was witnessing a high rate of growth. The present level of operations at Pragati, have come a long way from the time that they installed their first treadle press with just three workers. They employ almost 700 people and operate out of 2,30,000 square feet of production area spread over at various premises in and around Hyderabad. Everything from pre-press to post-press is done in house. The infrastructure besides other equipment comprises of twelve offset presses, two MPS label presses, one Nilpeter Label press and the latest acquisition, Omet Varyflex the in line folding carton press. When asked about the new investment in Omet Varyflex, the first one of its kind in India, Narendra says, “It was a wish to do all operations in-line rather then moving jobs from one equipment to another, carton making involves too many offline operations”. Luckily they had gained experience in flexographic printing from their indulgence in labels, offset was already their forte and they were also producing cartons, so it was easy for them to integrate the technologies comfortably on the Varyflex. 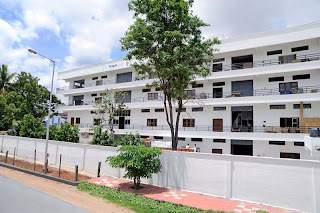 The ethics, values, commitments and team spirit instilled in the entire Paruchuri family are amazing. Their involvement in their business is total. In his endeavour to sustain the high level of competence and growth, Narendra is supported by his brother Mahendra who apart from keeping the machine in ship shape, shares the management hat. Harsh his elder son who is a printing engineer and an alumni of the prestigious Rochester institute having specialized in printing technologies and Hemanth his younger son also a mechanical engineer from Purdue are heading the labels division. Of course the towering personality of P Hanumantha Rao is also there to support them, he still spends some time in the press before moving on with his involvement in social and charitable work. His social work has had the family actively contributing to the society by helping in constructing a community hall, an old age home and providing scholarships to needy students. Narendra’s wife Sasikala is a doctor specializing in laparoscopic surgery. She also does her bit to give back to the society. For the past 18 years she has been running a free clinic, Pragati Public Charitable Trust, every Thursday at village Mokila, some 30 km from Hyderabad. The clinic has almost 18,000 registered patients as of date. Her daughter in law, Shruti (Harsh’s wife), even though she has two school going children contributes her might. Besides being the perfect hostess at home to special guests she also helps out in the purchase department of Pragati. Truly a committed family with three generations actively involved in business and the fourth generation growing up to gather the reigns, eventually.
﻿﻿﻿﻿﻿﻿﻿ ﻿﻿﻿
Narendra is a tireless work-alcohalic. While he follows a 12 hours work regime from 8.30 to 8.30 yet he says that I am available for my team at least up to 10 pm. No wonder that the company reports 12%-15% annual growth in the offset segment and 25%-30% annual growth in the packaging segment that includes labels. He strongly feels that the MIS system implemented in 1992 helped fuel this growth. When asked about his plans and projections in the next five years. He is very clear in his thought, says that the company’s resolve to excel in print quality and deliver value to customers since inception has made it possible for it to become a zero debt company which continues to grow. The inertia of growth levels already achieved and the opportunities as and when they emanate, will automatically drive us into continuous expansion in the times to come. In his leadership, Pragati has been the recipient of many international awards for print excellence. Topping the long list of awards they won is the Sappi Elephant award for excellence in printing in 2006, 2008 and 2010. In 2010 Narendra wanted his father to receive the award personally. Since his father was not fit to travel, the organizers, as a befitting mark of respect to the founder of this press, P Hanumantha Rao came all the way to Hyderabad to honour him. The three generations of this family are not resting on their laurels, they strive hard to retain the saga at Pragati, “Winning awards for print excellence, is a way of life!”
Written by Harveer Sahni, Managing Director, Weldon Celloplast Limited, New Delhi August 2011