Vinesh Bhimani’s Kimoha Entrepreneurs Limited, Dubai, UAE is a shining star amongst label printing companies run by Indians in Middle East Asia or for that matter by anyone outside their homeland. His persistence and commitment to succeed has enabled him to bounce back to success from extremely adverse circumstances. With over two decades of relentless effort and dedication, he created his label brand “Xel-lent”. He achieved perfection by creating labels and print packaging products that would stand out in the market place. During my recent visit to his facility, I was overwhelmed by the way he accorded a welcome (which I gathered is a customary practice whenever any of the company’s stakeholders visited); All the TV monitors in the company, and there were quite a few), had a welcome message for me apart from announcing the recent award received by their Chairman Shri. Kiran Asher  from the President of India at the Pravasi Bharatiya Divas at Jaipur in January 2012.  Carrying the hospitality further, my picture (commemorating my visit) was taken and gifted to me in an elegant folder along with customized gifts. He has experienced success and rejoices the fruits of bringing excellence to “Xel-lent” and also to all the businesses and operations at Kimoha.
Whilst Vinesh Bhimani’s  grandfather lived in Africa working for a private bank in Zanzibar, his  father preferred to return to India and set up shop in a free and independent India in 1947-48.  Nizamabad in (AP) India became the family’s base and in partnership with his uncle bought a rice mill.  They did not meet with success and lost all that they invested, in a year’s time. However they were persistent and restarted a small floor mill (Atta Chakki, as they call it in India). This venture, by virtue of their hard work prospered to become a successful rice mill! In 1962 Sanjiva Reddy, the then Chief Minister of Andhra Pradesh and later the President of India, conferred upon this mill an award for safety. 1970-71 saw Vinesh’s father parting ways with his uncle and in conjunction with his own brothers (whose responsibility became his after the demise of Vinesh’s grandfather) taking over the management of the rice mill. Vinesh then still young and attending school during the day would spend his evening and nights in the rice mill.
Vinesh graduated in Commerce from Nizamabad, and his father crafted different plans for him. He did not want him to join the rice mill, instead wished that he would take up the offer of RRL Jorhat, (Regional Research Laboratory) to use their technology to manufacture carbonless paper.  The seed for his involvement with Paper was sown and necessary equipments ordered from Kolkotta by the family.  Meanwhile Vinesh was sent to Mumbai for a one month management course. He was to stay with his uncle (mother’s brother). The uncle was the fifth generation from a family that was heading the 142 year old large and respected trading firm Khimji Ramdas, based in Oman. Vinesh’s uncle made him an offer to come to Oman but his family was ready to start the carbonless paper unit in Nizamabad. Unfortunately the equipment failed to perform and they lost all the money they invested into this project.

At this point of time Vinesh was sent to Oman to get a “feel” of things before returning to Nizamabad and start something else there. That was 34 years ago and he never returned to settle down in India. Vinesh had joined Khimji Ramdas as a trainee and left at the post of a General Manager in 1988. From Oman he came to Dubai and with the experience gained in Oman he, with his brother in law Kiran Asher, started a trading company. They made their first deal of importing Turmeric from Hyderabad, India and exporting to an Iranian customer against a post dated cheque. The cheque bounced and they lost most of the money invested! Whatever stock of turmeric was left with them was brought by them and stored in a Jebel Ali warehouse. As luck would have it, that night, a water pipe in the shed burst and they lost all that remained. Vinesh Bhimani was a devastated and embarrassed man. He blamed himself for his brother in law and partner Kiran having lost money. He offered to sell his house in Mumbai to repay Kiran. Perhaps God had other plans for Vinesh. Kiran asked him to stay on and wait to let things settle down, they decided to stay together. It was now time to start “Kimoha”.  Briefly they started packing food items but soon shifted to manufacturing telex and fax rolls. Nostalgically Vinesh reminiscences that they participated in an exhibition and Sheikh Mohamed, the current ruler of Dubai, visited their stand and asked them if they manufactured these rolls in Dubai. He then advised a big stationer accompanying him to buy from them. For many years this stationer remained one of Kimoha’s biggest customers. Business began to grow with exports to many countries and Vinesh started to travel extensively.  During his travels he would be fascinated by the baggage tags, each time he would check in at the airlines counter. He would study the tag at length and vowed to produce it one day. He went to Japan to visit suppliers of thermal paper as also to learn about the product. It was a matter of time now, his mind was made, “he would manufacture the baggage tags and self adhesive labels”.
Vinesh Bhimani went to the first Labelexpo that was held in Brussels and also attended the presentation made by the international label guru Mike Fairley. All this effort was made to learn about the products that he intended to produce one day. He had a voracious appetite to acquire knowledge about the products that he intended to indulge in. At Labelexpo, machine suppliers were wondering who this man from UAE was and what all he was talking about. He was a new entrant and wanted a label press to have features that were not for beginners. He wanted a 24 inch repeat and three die stations, etc. Little did they realize how focused this man was. Before the show ended he was decided on the configuration of the press, it had almost everything on it, the repeat he wanted, print stations, turnbar, sprocket hole punching, fanfold, etc. It looked expensive but when he called his partner Kiran Asher, the answer was in the affirmative. Kimoha was on way to success. 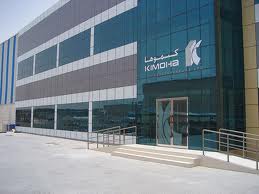 Initial hiccups were normal. There were no operators so Vinesh had to go to India for recruitment. In 1995 Kimoha got their first contract for baggage tags from Emirates Airlines but with a rider attached. They were warned that if they do not deliver they would have to quit UAE! All appeared to be going smoothly when a nightmare struck, the die got damaged on line and all hell broke loose. They rushed a person to UK by the next flight and return immediately after collecting the die. They delivered and kept their commitment. Kimoha has not looked back thereafter.  At three Labelexpos thereafter, they kept buying new presses one after the other. With just two employees in 1988 in an 18 square feet office, Kimoha has come a long way. They now operate out of a 200,000 square feet brand new facility at Jebel Ali, Dubai. The factory is immaculately clean and systemized. They have 8 label presses, five Aquaflex and three Gallus alongwith a host of other finishing and converting equipments. The total workforce at Kimoha is in excess of 230 employees. Kimoha offers a range of baggage tags, label products, flexible packaging and stationery. With a sales turnover of 100 million Dirhams (Rupees 125 Crores) their products have presence in 35 countries. Their presence in the baggage tags segment is very strong with supplies going to over 30 international airlines.
Purnima Bhimani married Vinesh in 1978, she was by his side in business that day and she is still there in office daily supporting him actively. She takes care of finance and planning of the interiors at Kimoha. She has given her best to the growth of this enterprise. Their only son Jay is 15 years old and studying in Gurukul, Hyderabad. Jay may join the family business one day but the parents feel it is too soon to say as young people are quite unpredictable. He may want to do something else. After all the family has a history of drifting in diverse fields. The great grandfather was a banker and the following generations drifted to Rice mill, Floor mill, International trading, Food packaging and on to Labels, Printing and Packagings. Kiran Asher, Vinesh’s brother in law and partner who has been his staunch support is the Chairman of Kimoha. Vinesh’s brother Rajesh has also been with Kimoha for 15 years. He is responsible for besides other things the house keeping at Kimoha. His work shows! The facility is amazingly clean. Vinesh Bhimani works hard and his team is like his family. He tirelessly communicates with them to instill family values. His staff sometime receives emails from him that were written at 3am in the morning. He took 267 people one day to visit Burj Khaleefa, in an effort to deliver his message of aiming high and having higher virtues in life. Each day starts with the entire Kimoha family (the workforce) joining in morning prayers. At lunch they are served a high-end restaurant catered meal and are allowed some extra time to play indoor games before returning to production. Education of employee’s children, medical expenses, insurance, etc., is areas where the company supports its employees.
Kimoha has been honoured as one of the top 100 SMEs in Dubai in the first ever ranking initiative held recently and they stood:
–          38th rank in the overall top 100 SME companies in Dubai
–          3rd in the top 10 SME in the INNOVATION category and
–          10th in the top 10 SME in the GLOBAL ORIENTATION (EXPORT)
When asked about his vision on what his venture will be five years hence, Vinesh Bhimani is pensive in his thoughts. He is non-committal on what Kimoha will be. He firmly believes that he has to be doing something different and specialized. He wishes that his entire Kimoha family remains bonded together and involved in creating something special. Size is not what matters. The goal is, to be unique and achieve a status where the entire team has contributed, to bring excellence to Xel-lent and beyond!
Written by Harveer Sahni, Managing Director, Weldon Celloplast Limited, New Delhi February 2012