Indians, the most visible lot at Drupa 2012

Before my visit to Drupa 2012, the world’s biggest print-show, I was wondering, what this show had in store for the visitors and exhibitors. The fourteen day extravaganza would definitely leave them exhausted and evaluating whether this duration was justified. While this would hold true for the exhibitors and their staff but for the visitors it was very convenient to adjust their visit to the show in terms of the duration and the dates to visit this gigantic show, considering the time available at their disposal. As visitors entered the exhibition, they were stunned by the sheer size of this event. Even the city of Dusseldorf, where the show was held, came forward to welcome the flood of visitors. Hotels were all full, guest houses and paying guest accommodations were also all taken up months before the show was to open. However still, it was possible to find a willing resident, who would offer a room in his or her home, to a needy visitor. Then there were also seen these floating ship-hotels parked on the river Rhine providing extra rooms for the show.
During the show morning newspapers, periodicals, etc carried substantial news and articles on Drupa. In fact, on the second day after the event opened, we were pleased to see the front page of the morning newspaper with headline “Dusseldorf is in Drupa fever” carrying the picture of an Indian at the show. I have scanned and attached the picture. Drupa is held every four years at the exhibition grounds, Messe Dusseldorf. The complete fairground consisting of 19 halls was transformed into a massive printing plant catering to every part of the multitude of diverse printing processes. 1850 exhibitors from 56 countries were exhibiting in stands spread over  1,65,000 square meters in an effort to attract the attention of an estimated and targeted amount of 3,50,000 visitors. 3000 journalists were to cover the show and 30000 stand personnel were available to respond to visitor queries. Stand sizes were also gigantic. The single largest stand at the show was that of press manufacturer Heidelberg admeasuring 6300 square meters in Hall No.1, which is more then all of Labelexpo India! This was followed by the HP who were showcasing their products from a 4950 square meter stand. The visitors on recovering from the initial impact of witnessing this massive display were left in awe! 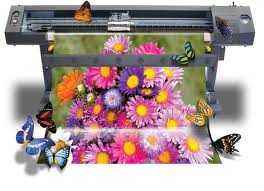 Drupa has always been projected as a show, targeted at offset printers around the globe. More so, the show has been focused at commercial applications with conventional printing processes. All that is changing! With the electronics media assuming the position of being the prime medium for communication, commercial printing is going down. Packaging has come into lime light. So long humans need food, clothes and day to day necessities, packaging will keep growing. The focus on packaging was visible both in exhibited equipments and the visitors looking for new opportunities. Continuous advancements in electronics and need for shorter runs has seen growth and innovative developments in digital printing. At Drupa, one could see the unstoppable march of print from analogue to digital printing. Even though digital printing at this time is less than 2% of all the print, the rest being conventional, the show was perhaps showcasing a near reverse of the ratio. Numerous exhibitors from different parts of the world indulged in presenting diverse digital printing technologies to visitors, eager to acquire more knowledge of this evolving printing process.
HP led the way with 10 new product launches and a stand full of equipments, patronized by a sea of visitors. Kodak went on to display their evident shift of focus from consumer electronics to graphic communications as a part of their restructuring programme. They were present with perhaps the largest number of new product launches and a portfolio that justifies their endeavors to turn around.

Posted by http://harveersahni.blogspot.com at 2:45 AM No comments: