“Labelexpo-India 2012, was an amazing and vibrant show. One stroll around, left visitors in awe! The quality of the spread, ambience, and the diverse offerings from a global list of renowned suppliers of materials, toolings, equipments and printing presses made it a wholesome treat for the label printing fraternity. Truly a show, that was the best Labelexpo in India so far”

In these few words I summed up my comments on the recently concluded Labelexpo India. It is a show that has gradually grown to a standard that was missing in the previous editions. One could hear the visitors expressing satisfaction at the quality of the exhibits. As many as 20 label presses were working at the show and were catering to the needs of a multitude of printers from various segments. There were those who looked for the state of art high-end expensive equipment and there were also those whose who had smaller budgets and wished to buy value in what they could afford. The show offered options to all. I would like to commend the organisers for the diverse mix of focused exhibitors at the show, such that it did certainly contribute to the vow factor. The layout was well spread and the warmth of the label industry's fellowship emanated a great feeling of comradeship. Even the founder of this show Anil Arora commented, "It is a very good show" Anil and his wife Neetu founded this show as India Label Show and later, UK based Tarsus acquired it in 2007. While the 2008 show in the aftermath of Mumbai terror attack was held as India Label Show, in 2010 edition they renamed the show as Labelexpo-India. The 2008 show was held at the onset of the economic slowdown yet it did pull through well. In the 2010 show, the euphoria did buildup well as the slowdown was tapering off and now in 2012 it has reached a pinnacle with the markets expanding and consumerism on the rise. The Labelexpo-India has become an important marketplace for the label industry in India and South East Asia where printers converge to witness and check on their imperative needs to aid their expansion plans at one place. The quality of exhibits was excellent and we can expect the show to be bigger and better in times to come. The Tarsus team was well synchronized and did their work in an efficient manner without any serious snarls which are normal at busy shows. The weather was also conducive with temperature a little lower than what it is at this time of the year, making it very comfortable for visitors at the show.
The labelexpo-India 2012 was inaugurated by on the morning of 29th October 2012 by Mike Fairley, The LMAI team, Tarsus officials and members of Delhi Printers Association. The final numbers from the organisers state that 8,037 visitors came to visit the show which is 33% up from the previous Labelexpo. 53% of the exhibitors have confirmed participation in the next edition with a commitment for bigger stalls.

After the inauguration of the show Mike Fairley inaugurated the “Technology Bar”. Weldon Celloplast had put up a unique stand labeled “Technology Bar”. All their principals were serving technology from bar counters allotted to them. At this time Mike also released Weldon’s 120 page hard-bound Technology Brochure.

With India’s growing literate population expected to drive in high demands, the international suppliers of materials, consumables and equipments are very focused in their attempts to get a bigger slice of this market. The importance given by these leading suppliers was evident by the fact the senior level managers and owners of many companies were personally present to meet the Indian label printers. From amongst the leading European label press manufacturers, Ferdinand Ruesch owner of Gallus was seen not only interacting with visitors at his stand where Gallus ECS340(sold to Wintek, Division of ITW) was displayed but also visiting other competitors stands observing different technologies being offered. In words of Sudhir Sawant at Gidue, “None other than Ferdinand, Ruesch owner of market leader company like Gallus visited Gidue stall multiple times to see live demos of Gidue Combat I” Federico Annunzio and Cristina Tofollo the owners were present at Gidue stand.


Antonio Batesaghi, President Omet and Marco Calcagni Sales Director, despite preoccupation made sure to be at the “Technology Bar” the branded Weldon/Omet Stand where their Omet X4 label press was on display. Peter Erickson COO Nilpeter and Jakob Landsberg Marketing Director Nilpeter were conspicuous by their presence to promote their Nilpeter FB3300 assembled in their Chennai facility and sold to Ajanta Packaging. Even though they did not bring a press this time, Bibiana and her mother owners of the Spanish press manufacturer Rotatek were at the Creed stand. Mike Russel and Mary Sullivan, senior managers of Mark Andy lead the team at their stand showcasing MA-P5 sold to Wonderpac, Delhi. Canada based ETI, UK based Edale and MPS though present at the exhibition, did not display any press. There was a host of Taiwanese and Chinese equipment suppliers.

Indian press suppliers put up an impressive show! Multitec showcased two presses, one the regular entry level flexo press with hot air and the second a new launch VSI which is all UV with chill drums and a short web path of 1.10 meters between two print stations. This company is progressing very impressively and I see them growing technically each year. Other machine builders who showcased presses were Faridabad based Webtech and Alliance Printech. Ahmedabad based R K Machines displayed their flexo press and other equipment. Other Indian press manufacturers Jandu and Apex Rotatech did not have working presses in their stands. Other important exhibitors at the show include Xeikon, EFI, Epson, Martin Automatic, Dupont, Esko, Matho, Rotometrics, Lartec, Electro Optics, Nikka, Berhalter, Vetaphone, Ace, etc.

Top management of both Avery Dennison and UPM Raflatac were present at the show throughout. Indian material suppliers included SMI, Stayon Papers, Sticon papers and Weldon. The list of exhibitors was 200 strong and it is difficult to list all.


Indian label printers came from all corners of India. With market being in a growth curve suppliers were seen wooing the industry’s leading printers. I was able to identify many of them. From North Sanjeev Sondhi of Zircon, Ajay Agarwal from Syndicate labels, Prem Khanna from ROPL, Karl from Reynders, Priyata Raghavan from Sai Packaging, Kusum Dunglay from Reydun, Sudhir Jain from Jain Transfer, Pavail Jain from Monarch, Kulbhushan Gossain of Unipack, the Holostik team, Rajesh Chadha Update Prints, Kuldip Goel from Anygraphics, K K Bajaj of Regal, Mahajans from Prakash Labels and Gaurav Goel of Gopsons are some of the printers who I met personally.
As from East India I could only spot only Rajneesh Jain from Secure Print Kolkata. West India probably had the biggest contingent with representatives from Interlabels, Webtech, Ajanta, Creative Labels, Sicon Packs, Superlabels, Mudrika, Total Print, Printmann, Synpack, Tayabi, PPL-Huhtamaki, Precise Labels, Janus, Renault, Mahrishi, Astron, Letragraphix, and a more. The contingent from South had representatives from Seljegat, Wintek (ITW), Pragati, Arunodaya, Team Labels, SGRE (Positive Packaging), SPP, Better labels and Sai Security, etc


At the end of second day of the show leading suppliers threw parties at various venues in the city for their customers.

The third evening was another fun part of the show. The entire label fraternity converged to Hotel Le’Meridian for the LMAI awards night.
The organizers emphatically state that they gave only 500 passes for the event which was by invitation only but they had over 700 guests! Obviously no one wished to be left out and miss the fun. The evening was compeered by actress Pooja Bedi and there were lively performances by Punjabi folk dancers. The awards were given to printers in some 27 categories. Roger Pellow in his speech declared that this was the last official visit of the Label Guru, Mike Fairley due to his progressing age. I personally was overwhelmed when Mike in a nostalgic speech that evening, reminiscing old times he said, “My relationship with the Indian label industry started some thirty years ago when one afternoon the doorbell of my home in London rang. I opened the door; there was this gentleman from India standing in front of me. His name was Harveer Sahni, he wanted to subscribe to my magazine Labels and Labeling and also share with friends in India….” I was so stunned by Mike’s sharing the memories of my first meeting with him that I was speechless for a while. Douglas Emslie the Group Managing Director of Tarsus who was sitting next to me, had a smile on his face and asked, “Did you know Mike would say this?” I just shook my head, I had no words.

As the evening progressed while the last of the awards were being given to the executive committee of LMAI, the music came on and while still on stage the LMAI team broke into a dance. Thereafter there was no stopping. One by one, people were heading to the stage and the party was in full swing. It also happened to be the birthday of Gallus owner Ferdinand, I had the pleasure to shake a leg or two with him.

Roger Pellow is always a hard working professional but when he parties, it is fun all the way! He was dancing his heart out and pulling all to the floor. All young and old were having a fun time, forgetting the competition they were all comrades enjoying the fruits of companionship! 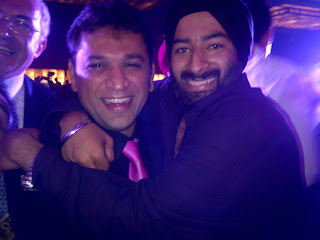 Chandan Khanna and KD Sahni of Weldon in lighter moments


Written and reported by Harveer Sahni, Managing Director, Weldon Celloplast Limited
Posted by http://harveersahni.blogspot.com at 7:36 AM