On the 10th of May 2013 I landed in Milan Italy to participate in the leading label press manufacturer Omet’s celebrations on completing 50 years in machine building. Since the major part of the celebrations was to begin the next day, I decided to visit the Converflex and Graphitalia, printing and converting shows being held at Fiera Milano. The show was well laid out and had a good mix of exhibitors and visitors largely from Italy. It appears the show has lost its clientele substantially in the no. of visitors over the years. This is bound to happen with the number of printing shows going on increasing. Printers and exhibitors are confused and wonder which shows to attend. After all it takes a toll on the expenses and the time available. In March 2013, it was the Ice show in Munich Germany, in April we saw Gulf Print Pack at Dubai and in May we have already seen Converflex and Graphitalia at Milan and the huge Chinaprint in Beijing! Next month in June 2013, the Finat Congress will be held in Munich Germany. Despite other shows in between, the biggest event for the narrow web label industry “Labelexpo Europe” will be held at Brussels in September 2013. The regularity with which these shows are held, one is left wishing that there is a monitoring mechanism but then in these days of liberalization it may not be possible. Converflex had almost no Indian visitors however it was interesting to see the sole Indian exhibitor, machine builder “Expert Industries” from Bangalore. Infact this exhibitor was also present at the Ice show in Munich Germany. The show had a fair no. of exhibitors who are also exhibitors in the Labelexpo’s catering to the label industry. These included; Xeikon, Omet, Vetaphone, Ace, Apex aniloxes, Daetwyler, E+L, ESKO,  etc. The organizers claim the show after hitting the bottom has started to recover and recorded over 18000 visitors from nine different countries. The future edition of the show in 2015 is being clubbed with two more shows i.e. IPACK-IMA and Intralogistica Italia. The organisers expect 2500 exhibitors and 100000 visitors to the combined event! This is a good step


﻿
Omet did have the press day on the same afternoon. The official presentation of the monograph of OMET "50 Years of Passion and Excellence" took place at the Villa Cipressi in Varenna, Lecco. In the splendid setting of the villa and gardens built between the XV and XIX century, Antonio Bartesaghi, Managing Director of OMET and Marco Calcagni, Sales Director made presentations about the company. Local authorities and leaders of chamber of commerce and industry attended to support the Omet endeavours to excel in an otherwise distressing economic situation for the manufacturing companies. Chiara Mauri, Professor of Marketing at SDA Bocconi in Milan and author of the monograph, had the honour of closing the day's proceedings recalling the genesis of the book, the difficulty to enclose a huge amount of different materials in a limited number of pages and the incapacity to retain the force and the passion that would spread out at every turning point in OMET’s history. 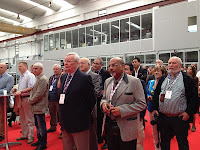 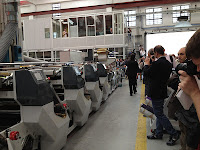 The main celebrations were held the next day on 11th May 2013. 187 visitors from 27 different countries collected on the shopfloor of Omet’s main plant amongst a collection of state of art Omet presses.


Antonio Bartesaghi, son of late Angelo Barthesaghi the founder of Omet, took the stage to initiate the celebrations. He spoke at length detailing the path and landmark events that marked the journey of Angelo over the years.
Marco Calcagni, sales Director Omet spoke briefly and handed over the stage to the International Label Guru, Mike Fairley. Mike chronicled the history of print packaging and the evolution of it all over the advancing years.

﻿
﻿
﻿
Chip Tonkin of Sonoco Institute of Packaging of Clemson University, South Carolina, with whom OMET has a long standing collaboration, spoke on the future of printing in areas other than traditional packaging and was the last speaker of the day. 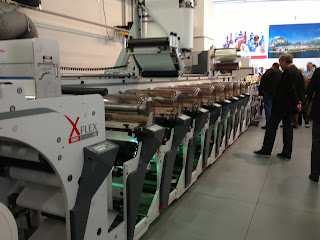 After a demonstration on the new XFlex X6 equipped with offset sleeve groups, the first press in the world to allow an exceptionally quick job changeover having to replace the sleeve only at each new execution, the visitors were allowed to move around and see the various Omet presses running in the demo center and ask questions to Omet technicians. Once they were done at the Omet plant the guests were ready to relax, it was now time to party!

All the visitors and the hosts moved to picturesque Lecco harbor to continue on the most relaxed part of the day: a boat trip from Lecco to Bellagio with a sightseeing tour of the village, from Bellagio to Como. 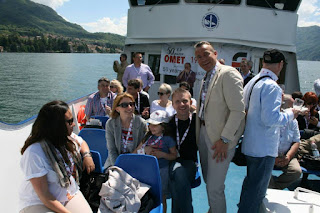 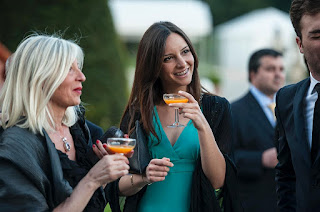 After the boat trip the guests were left at their respective hotels in Como for a change and reassemble for the Gala sit down Dinner at the beautiful Villa Olmo in Como. 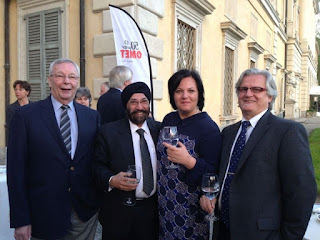 Networking over cocktails preceded the dinner.

After networking the guests were seated on their tables for dinner with musical performance and a magic show. 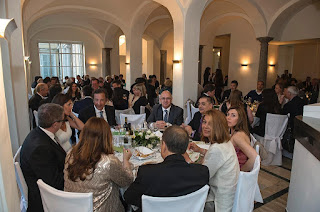 At the end of it all Antonio Bartesaghi spoke and thanked all who came.

It was a nostalgic moment when all the Bartesaghi and Calcagni family was on stage along with their mother the wife of Angelo Bartesaghi.

Many a customer who came from long distances, brought with them mementos to express their gratitude to the Omet team. They came on stage to make presentations and express their pleasure at being partners with Omet.

Many of the guests left early next morning but a few like me who had a late evening flight, were taken for another interesting tour to Villa Carlotta and then for lunch before being dropped to the airport with fond memories of the event.

Posted by http://harveersahni.blogspot.com at 5:28 AM