The euphoria was visible as the number of delegates consisting of label printers, suppliers from around the world, media persons and also all those remotely connected to label industry, continuously swelled with flight after flight landing at Goa’s Dabolim airport from destinations across India, on the 26th of July 2013. The party appeared to have begun at the airport itself! Industry friends were shaking hands and hugging each other and expressing happiness in being together for this bi-annual event. The reception and registration process at the Grand Hyatt Hotel Goa was welcoming and warm. It was nice to see the entire LMAI working committee helping incoming guests in registration and giving return gifts, all with a smile. As busloads of delegates continued to pour into the lobby of the hotel; smiles, handshakes and back patting hugs were seen all around. While the LMAI President stood smiling to welcome the incoming guests, one could notice a little nervousness. After-all, this second event under his leadership was twice the size of the earlier event in 2011. For 390 delegates a lot of effort and planning had been done and everything needed to move on smoothly. Suppliers and label printer were meeting their peers and looking forward to two days of fun and fellowship. By 5pm it was time for all to freshen up and assemble in the main hall. The LMAI conference 2013 titled “Print Innovation” had begun!

The conference started with a welcome address from Vivek Kapoor, besides welcoming delegates he thanked the sponsors and his team members who worked tirelessly to make this event a success. He also informed about the important activities that LMAI has done in recent times. Important ones are;
1. Donation sent to Uttarakhand PM relief fund
2. Launch of the LMAI website www.lmai.in


3. Launch of the LMAI members directory


4. Support to SIES students seeking jobs in the label industry
5. Subsidy to 60 LMAI members for travel to Labelexpo Europe this year as against only 25 last year (This is an activity spearheaded by the dynamic secretary Ramesh Deshpande)
6. Now the initiative that LMAI is to take up next is on “Sustainability”.

Anil Sharma, Managing Director Avery Dennison, who were the Platinum sponsors for the event, took the stage next informing the industry about further investments by his company and re-asserting Avery’s faith in the Indian markets. He said the per capita usage of labelstock is the lowest in India and given the size of population and a literate workforce the potential for growth is immense. He set the tone of the conference going by reassuring Avery’s commitment to support innovation in the pressure sensitive label industry.


Lindsay Rice from Dupont spoke on the evolution of flexo plate making technology and the improvements there in. Peter Henderson of Esko informed about proofing systems and support there-of. Kishore Sarkar of Daetwyler gave an interesting presentation on the usage of doctor Blades with different settings. Christina Nilsson of Flint spoke on benefits of using UV flexo inks. Ajay Mehta of SMI made a presentation on his assessment of the size of Indian label market.

As the days schedule was coming to an end all the sponsors, without whom an event of this scale was not possible were felicitated by LMAI. 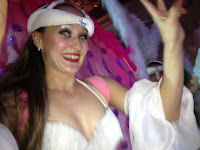 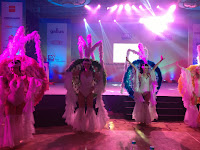 With this, the days working schedule came to an end and the fun part began. There were dancers and performances.


The star of the evening was standup comedian Veer Das. He was amazing. Spoke for one hour non-stop and had every one laughing their hearts out. An outstanding performance! As the DJ took over, the younger delegates and not the so young ones who love to dance decided to stay on stage while others moved to the bar, to quench their thirst. They had had a long day travelling and conferencing and laughing out to the non-stop delivery of jokes from Veer Das. Even though the bar was closed a little before midnight so that delegates come back in time for the second day of the conference, yet there were those who refused to leave and were partying till we left.

Surprisingly despite a late night, day two started with an almost full house. Ranesh Bajaj of Creed
Engineers/Vinsak made his presentation on technologies available for Brand security, Tamper evident solutions and anti-counterfeiting options.

﻿﻿
Carmen Chua of Avery spoke on sustainability solutions for labels and packaging as also the need to reduce the adverse impact on the environment. She reaffirmed Avery’s commitment to sustainability.


Over the year,s Tarsus the owners of Labelexpo series of exhibitions have, become close to the Indian Label fraternity and to LMAI. It is a partnership that has been fruitful for both. For this reason senior executives of the Labelexpo group make sure to be present at the LMAI conference. Lisa Milburn the young new Managing Director of Labelexpo group came to attend the conference along with marketing Director Michael Hatton and other members of her team posted in India. She went onstage to make short presentation on LMAI partnership with Tarsus and also on the fast approaching labelexpo Europe at Brussels. It was good to see her mixing with printers and suppliers establishing contacts and reinforcing relationships. The former Managing Director of Labelexpo group Roger Pellow who has been promoted to be the Chairman of Labelexpo Group, has many friends in the industry. Many printers and suppliers missed their “International Labelpal” Roger.

Backbone of any printing show is the primary printing equipment producers. They are the biggest exhibitors and the biggest sponsors. This holds true for the narrow web label industry as well. The heavy presence of top executives of all the big label press manufacturers gave credibility to the fact that India continues to be the market for them that grows consistently and continuously. It has like Anil Sharma of Avery said a market that has the lowest per capita usage and there is only one way it can go and that is, up! Ferdinand ‘Rüesch owner of Gallus was present along with his wife, son, Samir Patkar MD India and other team members. The Gallus presentation talked about forces influencing Indian markets.

Federico D’Annunzio Managing Director of Gidue spoke on excellence of digital flex. Manohar Dhugga of Mark Andy talked about Innovation & Automation for today's label needs & UV LED. Presentations were also made by Alan Baretto of Nilpeter and Spring XU of Weigang Machinery China. Each time we visit Labelexpo Europe we see the number of Chinese label press manufacturers exhibiting there, keeps on growing.


A part of us always yearned for our own Indian local machine builders to excel enough to come to the international arena and showcase. A vacuum was always felt. The first Indian to full-fill this gap and the only one so far is Amit Ahuja of Multitec. He made us proud when at the last labelexpo he showcased his press printing at 150 meters per minute without the register moving! He will exhibit at Brussels yet again next month. Amit was also a sponsor at this conference. In his presentation he spoke of his experiences and challenges faced as an Indian press manufacturer pitted against global brands. 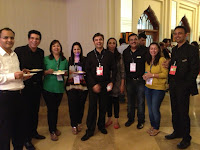 Kudos to the extremely focused and indulgent audience! They were the reason for the success of this conference.

No print show or conference is complete without deliberations in the digital printing. It is a process that is tempting all and appears to evolve fast to make other technologies obsolete some day in the future. Even though digital printing maybe attracting substantial investments from printers around the world, it has a lot of resistance from Indian label printers. Despite the resistance the interest in this technology does not wane. In fact on the contrary, printers continue to study the developments carefully and feel that it is the future. Leading digital printing equipment suppliers including Appa Durai from HP, Josep Roca from Xeikon, Ramprasad from CPG and Mark Huisman from SPG Prints made interesting presentations on the various developments in digital printing.

﻿ Other international suppliers who were not sponsors also made it a point to be present for this event. Chiara Prati of Prati Italy, Marco Aengenvoort of Rotocontrol, David and Hope from Martin Automatic, the Rotometrics team, etc were some of the many others who came.

On the sidelines during the coffee an lunch breaks networking was largely evident. 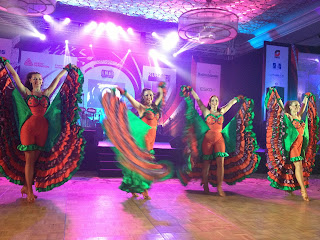 As the presentations came to an end European dancers emerged, followed by  excellent singing performances by Arshpreet Kaur a “Sa-Re-Ga-Ma-Pa” (Popular TV Programme).

Arshpreet entertained the audience with fine performance and singing.

The last performer for the evening was another TV contestant and popular singer Meiyang Chang.

Before Chang’s singing session came to an end he had a crowd on to the dancing floor.


The bar was open and the delegates were unstoppable drinking, dancing, networking, striking new relationships and going on as if the night will never end.


They danced and made merry and pulled every one close by to the floor.


The competition was forgotten only comradeship and friendship prevailed. It appeared like a global label family was celebrating endlessly! Around 3AM they were still partying when I was thoroughly exhausted and left wondering how long they would go on…

All good things have to come to an end. Next morning it was time to say good bye but I guess some business being in their blood, I could see printers trickling into the breakfast area with suppliers in tow for a meeting before they left. It really was a very busy event and one wished there was time to steal moments to enjoy the destination, Goa! The event management company did a good job. Vivek Kapoor had a genuine smile, now that everything went well. As we checked out of the hotel, delegates who over indulged last night, came somehow half asleep limping toward their coaches to take them to airport on their way back home. Even in their slumber they vowed to come back again for the next conference with more vigour and in bigger numbers. One thing common they communicated to each other alongwith the good bye as they left, was a commitment to meet again soon. Each bye-bye was followed by “See you at Labelexpo Europe”.
Written by Harveer Sahni, Managing Director, Weldon Celloplast Limited, New Delhi-110008 August 2013
Posted by http://harveersahni.blogspot.com at 11:36 PM