The seventh edition of Labelexpo India opened in New Delhi on the 29th of October 2014 and ended on 1st November 2014. It is the most important show for the label industry in India and is attended by all leading label manufacturers in the country. India’s only label association LMAI (Label Manufacturers of India) is a supporter and sponsor for this important event which continues to gain prominence in the Indian subcontinent. As per the information received from Tarsus, the show grew in space by 10% with 176 exhibitors though number of exhibitors was down from 200 at last event yet the space grew due to bigger and better stands. The number of visitors was almost same, in fact marginally less at 7927 as compared to 8037 at the last show in 2012 due to timing of the event explained later in this post. However the show gains importance from the fact that international awareness has increased with visitors coming from 54 countries! Detailed analysis of the visitors this time has put forwarded some very interesting facts. The most important being the quality of visitors has improved, bringing in an extremely focused lot of printers spelling value for the exhibitors. Also the number of visitors who came to the show for more than one day has increased by a whopping 42%.  It shows that that show has been successful in getting an extremely focused clientele. It was a good show!

Most of the renowned international narrow web press manufacturers with the exception of Gallus
were present, however still the number of European flexo label presses displayed at the show was down to just Omet, Nilpeter and Rotatek. 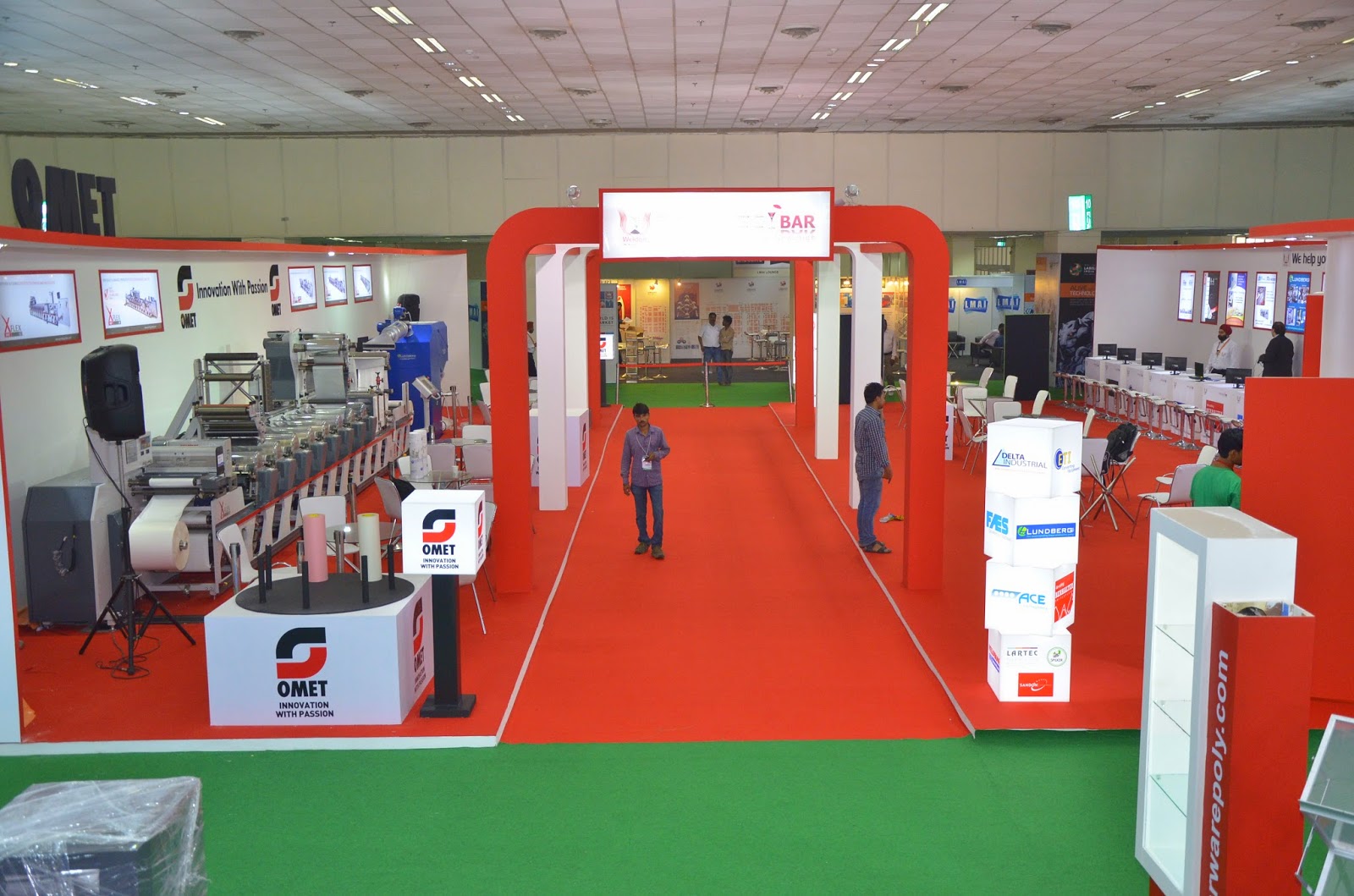 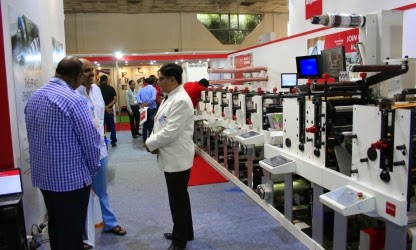 Surprisingly the Indian Label press manufacturers made an impressive presentation with Multitec leading the way with display of three presses including one that was a full servo and full UV flexo. Other prominent Indian press manufacturers at the show were Alliance, Webtech, R K Label machines and Jandu.

The Esko-Dupont stand displayed the possibilities of supporting printers bring out qualities comparable to Offset. The samples printed at Zircon left all in awe especially for the metallic effects brought about without use of any metallic inks. While international die and tooling manufacturers like Rotometrics, Lartec, Kocher & Beck, etc. were present yet it was interesting to note that Indian magnetic cylinder manufacturer Precise Graphics and flexible die manufacturer Diehard dies also displayed yet again. Vinsak, Kumar Labels and Precise also displayed their slitter rewinders.

While international labelstock producers Avery Dennison and UPM Raflatac were at the show, Indian manufacturers SMI, Weldon Celloplast, Shree Arihant and SticOn Papers also had a smart showing.  It is difficult to write about all the exhibitors I have still tried to communicate that India surely is now presenting itself well alongwith international producers. 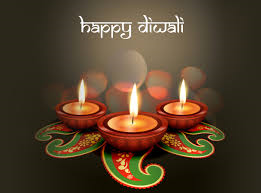 The time of the show as regards weather was quite appropriate as summers had come to an end, yet the dates on which the event was held were expressed as uncomfortable by many printers. Diwali, the biggest festival in India is celebrated with lot fervor just as Christmas is celebrated in Europe, USA and rest of the world. Diwali preparations begin weeks in advance. People had just two working days after Diwali festivities ended before Labelexpo India began on the 29th of October 2014. Moreover being end of the month the printers were under pressure to deliver labels to customers so that they can meet their sales targets. These reasons indicate that there may have been many printers who due to the timing were forced to miss the event or came for a very short time as they were compulsively required to be in their workplaces. This information was brought to the notice of the Tarsus leadership who has in turn assured to look into the possibility of rescheduling the next edition of the show so that it does not clash with Diwali celebrations and there is a reasonable gap for exhibitors and visitors to get settled back in business after this important festival. Another point is that exhibitors have not been happy with the quality of services provided by ITPO (India Trade Promotion Organisation) despite the excellent organizational skills of the seasoned Tarsus team. Coupled with high handedness and rigid monopolistic stand of ITPO, it is expected the show may move to another venue. It is a little premature to say at this stage. However still I will mention here it is my personal view.

It was interesting to meet international friends and colleagues; 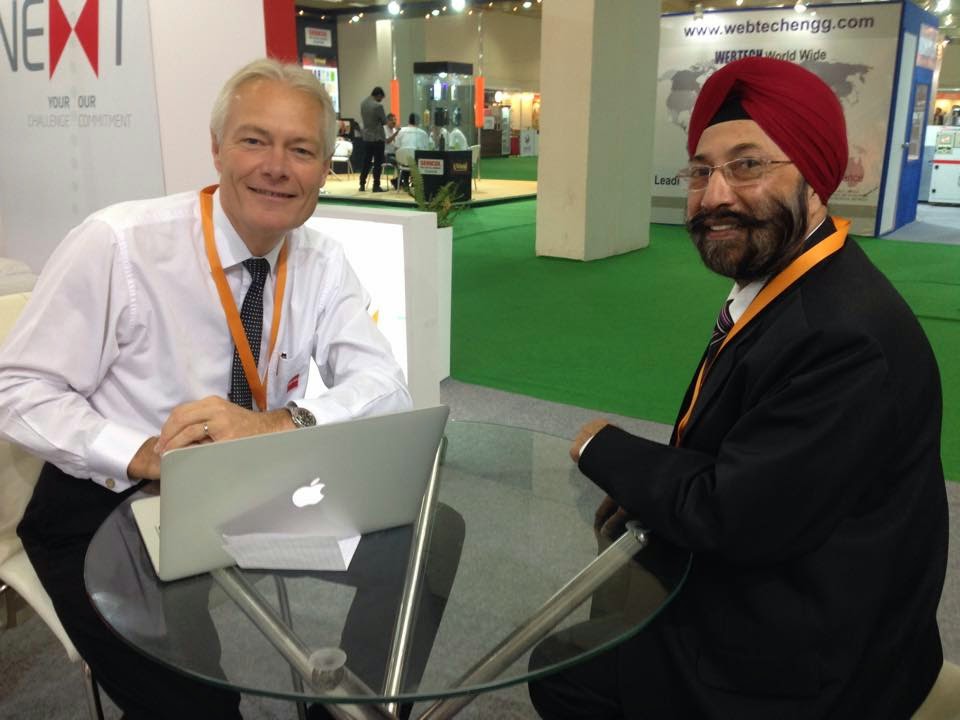 I had the pleasure of holding a meeting with Jakob Landberg Chairman FINAT membership committee to set targets in the Finat Membership Committee. 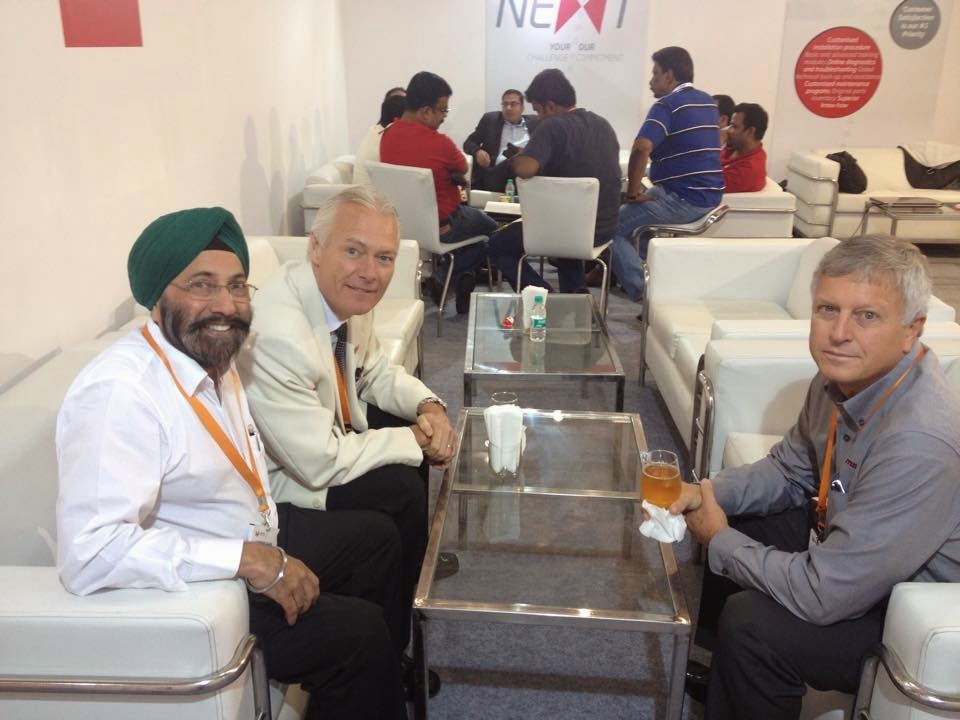 Another meeting at the Nilpeter stand with Jakob Landberg and Mike Russel of Mark Andy. Global friendship finds new meanings at such occasions


On the sidelines of Labelexpo India there always has been a fun part. Many suppliers organize parties for their customers. This time there were three main parties, the one organized by Avery was the theme party for the Indian industry, the LMAI Avery Dennison Label awards evening; the second was the UPM Raflatac party and the third and very focused small party organized by Weldon Celloplast at the Weldon residence.

Weldon Party:
The Weldon evening was for all their participating foreign principals including Omet, ETI, Link Label, Berhalter, Martin Automatic, Lartec, FAES, Lundberg, Vetaphone, etc. There were some leading printers like Hemant Paruchuri of Pragati Pack, Chandan Khanna of Ajanta Packaging, Sanjeev Sondhi of Zircon, Mahendra Shah of Renault (Part of Manohar packaging Group), Ahmad Kavoosi of Parsian labeling Iran and Thomas Mathews from Kimoha UAE. The Tarsus team was represented by Group Managing Director Douglas Emslie, Labelexpo group Managing Director Lisa Milburn, Group Managing Editor Andy Thomas and Event Director Claire Comery. Also present was Frank Burgos the President of FlexoExchange USA and heading the FlexoGurukul training program in flexo printing.  I could not attend the UPM Raflatac party despite invitation as the date clashed with our own evening. Maybe the next time we can co-ordinate better. 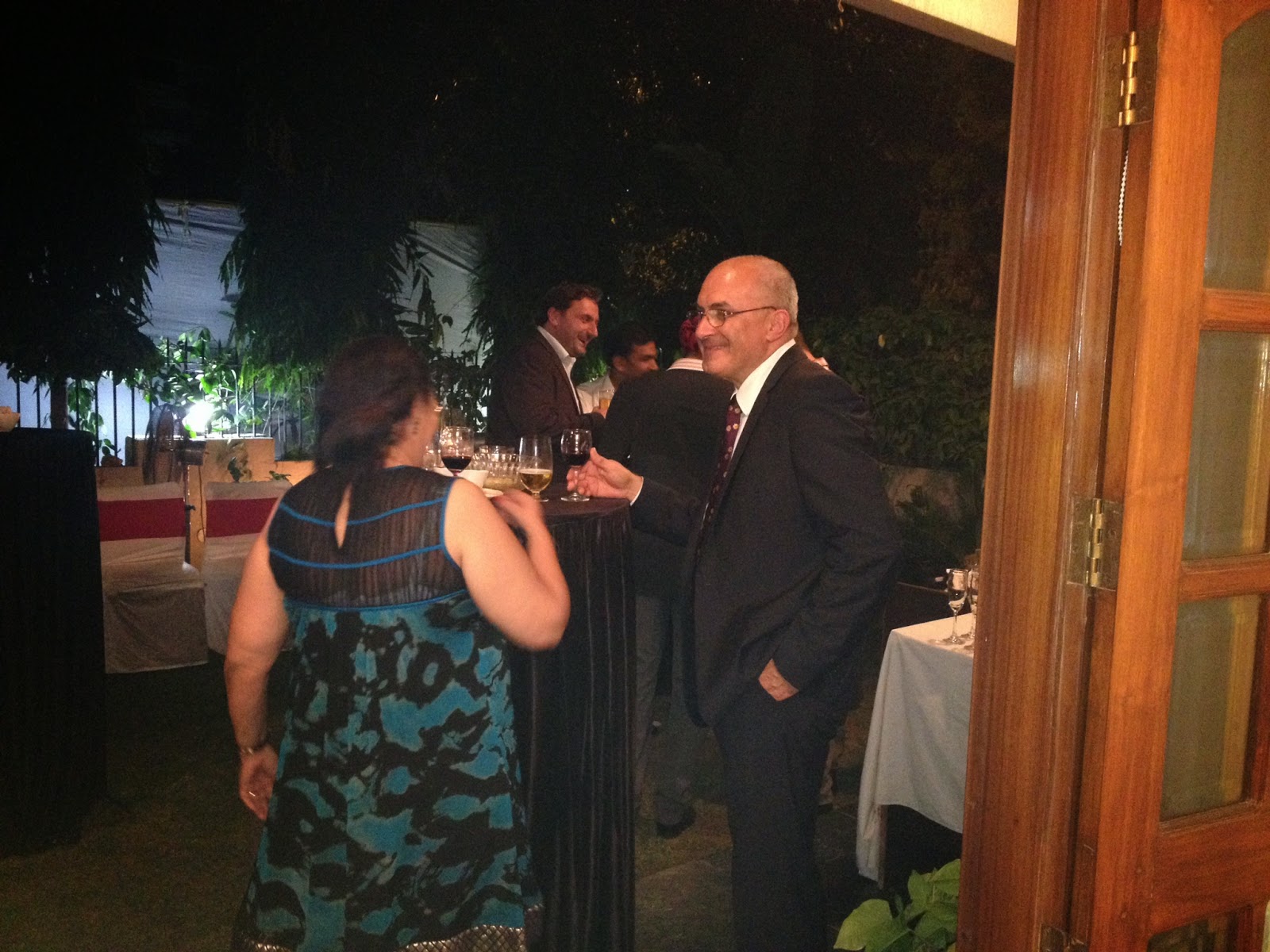 Pictures from the UPM Raflatac Party; 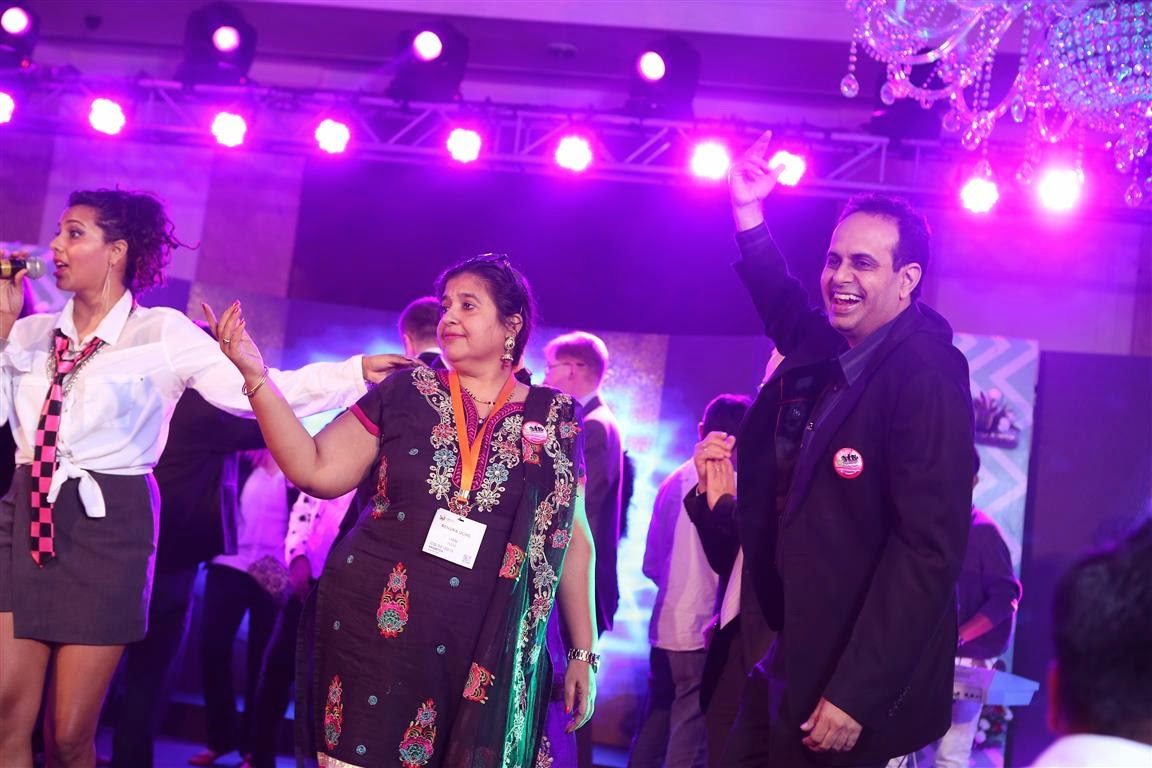 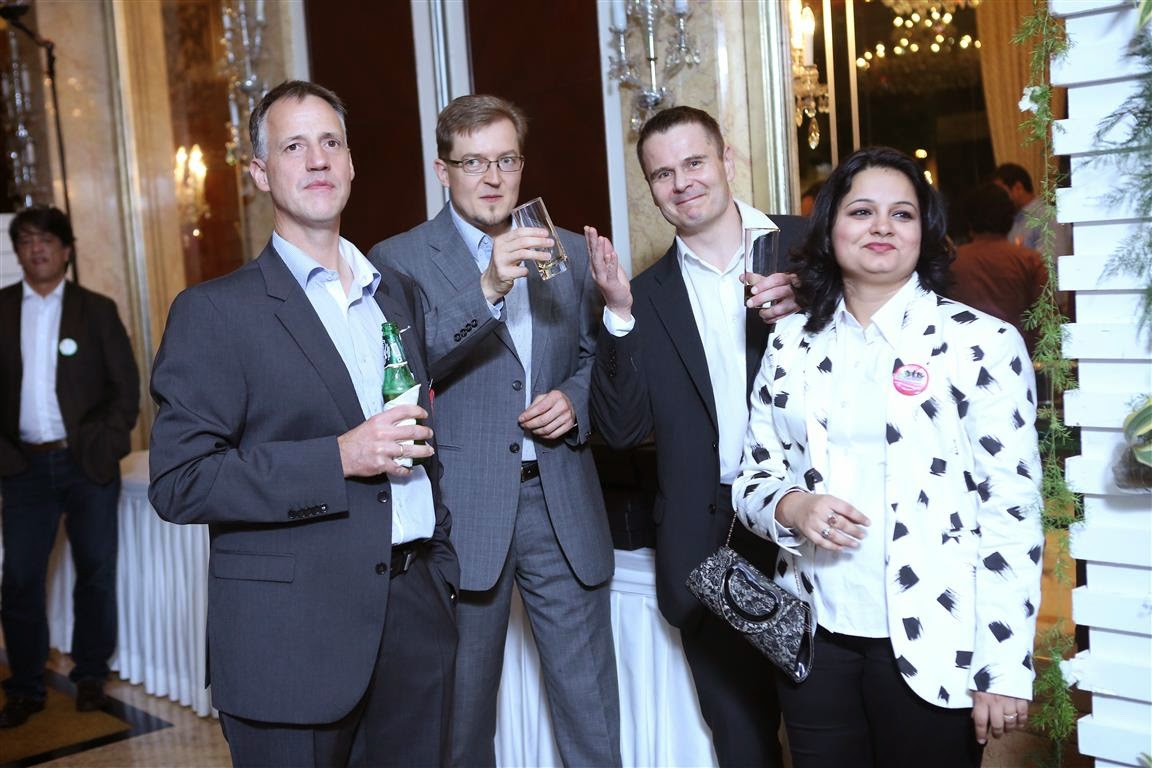 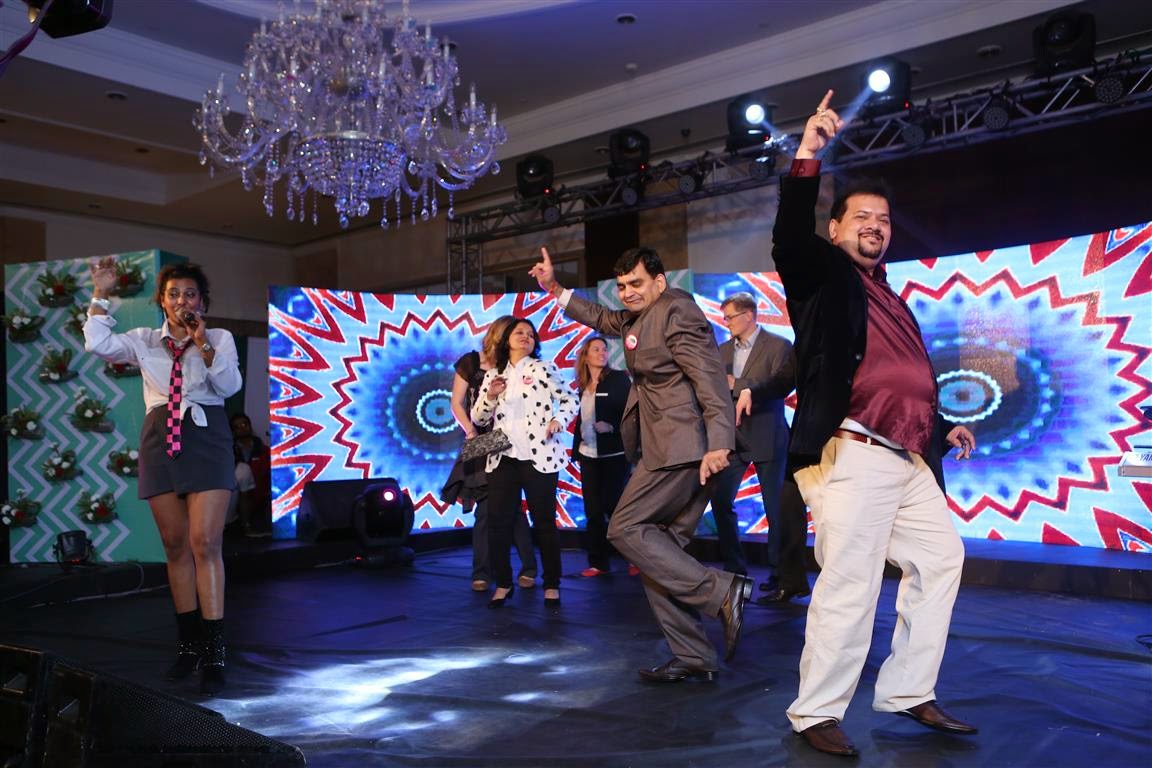 Meanwhile the biggest attraction of the Labelexpo India fun part is the LMAI awards night held at Hotel Le Meridian on the 31st of October 2014. Right from the opening day there was talk of tickets or passes for the event being in short supply. No one wanted to miss! The Tarsus team, LMAI leadership and Sponsors Avery were under pressure. Last time the pressure was seen and since it lacked control at the venue of the awards night, this year even though the controls were tight yet the demand for tickets was over bearing. This was because of a sudden growth in membership of LMAI in the last two years. The members were resenting just one ticket per member. It is also on agenda that for the next time a bigger venue maybe considered also additional tickets may be made available on sale. The evening started with speeches from LMAI president Vivek Kapoor and Lisa Milburn followed by an entertaining program and then on to the announcement of winners for the best labels. It was a great surprise to see Kuldip Goel lead Anygraphics bagging 10 out of the 20 awards followed by Rajesh Chadha lead Update Prints. Once the awards were over and the LMAI managing committee felicitated, it was time to party. The printers were all on the stage dancing with gay abandon and pulling colleagues to join them. Ferdinand Rüesch of Gallus who was a sponsor for one of categories of awards celebrated his birthday that evening and joined the dancing printers on stage along with his wife. Sometime closer to midnight I decided to go home but I am told the party went on for much more time and toward the end the charming and ever smiling Managing Director of Labelexpo Group Lisa Milburn sang on stage. Wow! I missed that…

Posted by http://harveersahni.blogspot.com at 10:06 PM