VICTOR HUGO, a French Poet in the mid nineteenth century, once remarked: “You can resist an invading army; you cannot resist an idea whose time has come. When mobile telephony came in, one could not imagine the reach it will provide to a common man who would not have means or will to reach out to the world at large. Telephones with internet connectivity have transformed life magically. No one could imagine that the only communication link that people had, “the landline” would one day become just a show piece. Such ideas, whose time comes by, evolve with such speed that the generations are left in awe of the change. Label industry is now faced with many such ideas like the move from conventional to digital printing, linerless labels and now evolution of in-line converting. Given the large investment in space and manpower, sheet offset, over a period of time is surely going to evolve to inline printing, decorating and converting using multiple technologies with lesser space and just a few people. At the recently concluded Drupa 2016, many such types of equipment were displayed attracting interest of printers. If it was just printing, the offset presses are doing a great job. It is the decoration and finishing that needs space, manpower and a host of different machines spread over a large shop floor. In modern retail highly decorated labels and packages are an imperative for consumers to reach out for the products. Hot foiling is one of the many processes that catches the eye of a consumer and becomes the preference of many a brand owner. So far most of the hot foiling is being either done offline on flat bed hot stamping machines or in-line with slow intermittent presses. It has been the wish of label printers who are so used to doing the conversion from start to finish in a single pass on their high speed rotary presses, to do the hot foil also in the same pass without compromising on the speed and quality.
On the 3rd of June, Peter Frei, CEO Switzerland headquartered Pantec GS Systems AG pulled me out of a busy Drupa to take me to the premises of Gewa Etiketten located on the outskirts of Frankfurt some three hours drive, for an “open house” to showcase their in-line hot foiling application equipment “Rhino”, that can be integrated into flexo label presses without really compromising too much on speed. Pantec GS Systems AG is an independent subsidiary of Pantec, a worldwide operating technology supplier for industrial applications and medical devices offering services, products and solutions in the field of machinery and medical engineering. They provide sophisticated in-line refining solutions. Their dedicated equipment for rotary and flat bed hot foil stamping & embossing, high performance vacuum foil savers, high speed & precision hologram placement is made to provide efficient high quality refining, directly in-line. 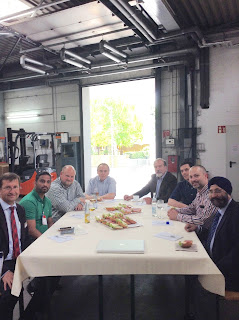 The company hosting the Open House, Gewa-Etiketten is leading producers of labels for Wine, Sparkling wine and spirits in Germany and Europe. The family owned enterprise was founded in 1931 and the third generation headed by Mathias Walter is still in control. The company operates from a total area of 7000 square meters and a production area in excess of 50,000 square feet. With 170employees at two locations, one that caters to sheet offset segment for wet glue labels and the other for self adhesive labeling, they achieve sales of 23 million Euros. The unit that we visited had 6 Gallus combination presses and one HP Indigo digital press besides a range of other complementary equipment. They cater to customers demands from 10,000 to half a million labels per day. As we reached the venue of Open House, Uwe Reflinghaus, CEO of Gewa-Etiketten welcomed us with lunch and introduced us to his team. Some more printers and suppliers were also present.
All visitors after introducing themselves heard Peter Frei, CEO Pantec GS Systems give his presentation. He said “I do believe  that single pass printing  and converting of packages is the real new opportunity for label printers having such web machinery already” He further added, “ I think there is a ‘huge opportunity’ that arises for label printers in packaging after integration of Pantec Rhino in an existing label press, as you will see being done here at Gewa”. After his presentation it was time to go to the shop floor for the demonstration of Rhino inline hot foiling system.
Oliver Jung, the printing expert handling the Pantec implementation project at Gewa took charge to explain and demonstrate the equipment and its technology.The Pantec Rhino was integrated in line on a Gallus RCS combination press to demonstrate In-line package printing and decoration as alternative to sheet fed package conversion. A label press was being used after integration of Pantec Rhino to produce highly decorated cartons. Contrary to the rotary web operation where the web continuously moves, this equipment has web Stopping-Stamping-Moving on, giving sharper images of stampings. The interesting part is that while the stop start operation is limited to the Rhino, the web otherwise keeps moving steadily and continuously at regular machine speed without stop and go motion. The equipment shown was capable of making 18,000 strokes per hour however they now have one that can do 25,000 strokes per hour. The movement and stamping is well portrayed in the video at https://www.youtube.com/watch?v=OA6SWgTqI-g&feature=youtu.be . 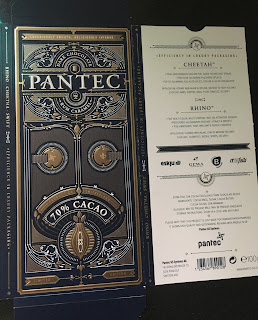 In one demo they ran a Pantec Rum Chocolate carton with printing, embossing, hot foiling and die cutting all running at 120 meters per minute in a single pass. 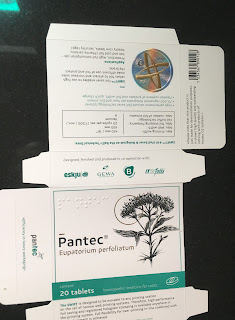 In another demo they ran a carton with also placing of registered hologram, printing on it and embossing around it. The equipment has advantage of speed in roll and as compared to sheet it has no wastages that occur at grippers and at gaps. 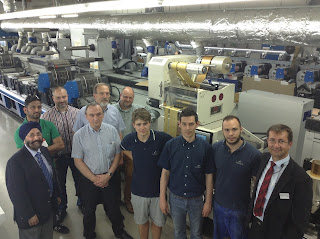 Note: Printing magazines and publications may reproduce this article giving credit to author.