“DRUPA” derives its name from the German words “druck und papier” meaning print and paper respectively.  It was first inaugurated in 1951 spread over an area of 18450 square meters, 527 exhibitors from 10 countries and 195450 visitors. The main highlight then was the platen press. By 1962 the show had grown to 48000 square meters and letterpress printing was changing to offset printing. 1972 saw Drupa being held at the present site with a brand new exhibition centre and the size grew to almost 100,000 square meters. The next editions of Drupa upto the end of the new millennium more or so saw the growth and development in offset printing technologies. From smaller machines to bigger ones, UV inks, better ink control technologies, Web offset, Ctp, Digitalization of equipments, etc, were the highlights. It was largely recognized as an offset printers show. Printers involved in processes like Flexo, gravure screen, etc. would not be a part of this show. The last decade of the last millennium saw some fast growth and activity in digital printing. 50years after the exhibition was launched a transformation in printing technology was evident at Drupa 2000. This was the peak of participation. The show had grown to 158,875 square meters and 428,248 visitors from 171 countries, the highest in Drupa’s history, came to the show. 1943 exhibitors from 50 countries showcased their products and equipments catering to diverse printing technologies. By 2004 internet was providing immense possibilities to the printing industry by way of networking possibilities like data transfer which made life so much simpler for the printing fraternity. Digital printing was spreading its reach. 2008 Drupa did actually confirm that digital printing is going to be the future.  Leaders in digital like Océ, Canon, Agfa, Ricoh, Konica Minolta, Kodak and HP were present in huge floor spaces confirming their resolve to bring about that change from conventional to digital printing. In 2012, Benny Landa took inkjet to the next level by promising nanographic-printing to be better than even offset. Landa’s showmanship and vision pulled hoards of visitors to the Landa stand, the world was talking about it. The HP stand of 4950 sq.mtrs and large stands of Kodak and other companies exhibited a new trend of combining multiple print and converting technologies leading to hybrid machines. For this reason Drupa 2012 was the initiation of making Drupa not just an offset printer’s show. However still people said digital to spread cost effectively and emphatically will take time.
Drupa 2016 figures: 260,000 visitors from 188 countries and about 1,900 journalists from 74 nations 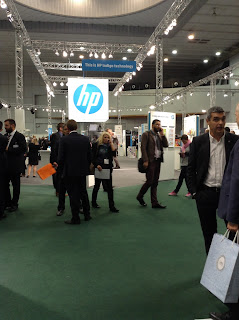 For advertising on this blog, please email to harveersahni@gmail.com Clicking on the advertisers logo takes you to advertiser's website. If advertisers name appears in the blog, link is provided from the name to their website