When the Labelexpo Southeast Asia at Bangkok Thailand was announced by the Tarsus Group, there was mixed reaction all around the industry. Yet another Labelexpo! It meant more investment in shows by exhibitors and dilemma in minds of visitors as to which edition of Labelexpo was the most appropriate for them. Undoubtedly Labelexpo Europe remains the flagship show that attracts international label fraternity across the globe to Brussels every two years. As many industry constituents have said, “It is the Mecca of Label industry and the biennial visit to Brussels is an imperative, so as to remain updated”.  Other than that there is Labelexpo at America, China and India. One can understand the regional organizing of this industry event as it brings important exhibitors to the region for at least for those printers who cannot travel to faraway destinations or for those who aspire to invest in manufacture of labels. The regional shows do bring in new enquiries that otherwise are extremely difficult to locate due to an extremely widespread industrial base. The show also contributes to the regional growth of labels in various geographical zones where it is held. However still given the relatively smaller size of label industry in Thailand as compared to Europe, America, China or India, Bangkok as a venue for Labelexpo was surprising. One would imagine that the show would have more of those visitors who wished to enjoy this holiday destination. A two in one motive would bring in the visitors driving in value for exhibitors and organizers. Surprisingly the show registered success. 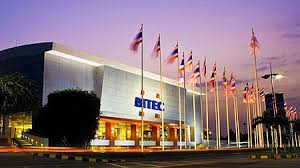 Labelexpo SEA was held on May 10-12 2018 in one of the halls spread over 4100 square Meters at BITEC-Bangkok which is a world-class venue with a total event space of 70,000 Sq. Meters. having large food courts and impressive infrastructure. The vast, column-free event venue has been custom-designed for ease-of-use and can accommodate up to 40,000 delegates within fully flexible spaces that include 10 expansive exhibition halls, 6 grand convention halls and 28 breakout meeting rooms. The turnout of visitors at Labelexpo SEA was impressive as visitors came from the entire spread of Asia Pacific region. 7934 visitors came to visit the show from 62 countries! One could see visitors from Thailand, Japan, Philippines, South Korea, India, Bangladesh, Vietnam, Singapore, Indonesia, Malaysia, etc. It was a show that was not restricted to just one country. Most of the regular exhibitors of Labelexpo registered their presence at the show lending to it the importance, indicating their efforts to expand the label markets to different geographical zones that have potential of growth. As the established western markets show signs of saturation Labelexpo moves to centers in the midst of countries that have double digit growth despite substantial population.
Leading press manufacturers exhibiting at Labelexpo SEA included Nilpeter, OMET, Mark Andy, Bobst, Lombardy and Weigang. Other leading industry suppliers who exhibited include Epson, Flint Group, GEW, HP, Konica Minolta, Lintec, UPM Raflatac, Xeikon and Yupo Corporation.

A large number of Indian visitors were seen, leading printers who were present from India included Sanjeev Sondhi of Zircon, Anuj Bhargava from Kumar Labels, Deepak Gupta of Shree Lamipack, D Sarkar of Classic Image Offset, Vipul Gulati from Alpine and Anbhazagan R from Retail Solutions and Technologies. Indian Labelstock manufacturer Stic-On papers was an exhibitor while suppliers who visited the event included Rohit Mehta of SMI Coated Papers the largest Indian labelstock manufacturer and press manufacturer Amit Ahuja from Multitec. When asked about their experience at the show, most people expressed satisfaction and felt that given the fact it was the first show in this sector, it delivered well.  Commenting on the success of the show


Lisa Milburn Managing Director Labelexpo Group said, “We are extremely happy with the event and have excellent feedback”
Some comments and images:

Jakob Landsberg, Sales and Marketing Director Nilpeter: I felt the first Labelexpo show in SEA was a good beginning – despite some few challenges in the setup and tear down phases. We experienced a good volume of quality visitors from all over Asia – and even a few Africa, Middle East and South America. We closed deals, took leads and found new projects that have to be handled in busy months to come.

Paolo Grasso, Head of Sales – Labels Business Unit press OMET – S.R.L.: Labelexpo Southeast Asia went beyond any possible good expectation we had. A great amount of visitors from all over Asia and some other parts of the globe as well. Nice and clean venue where all the exhibitors could build top-quality booths was comparable to the best of European standards. Good demos, lovely people and especially lots of prospects to work on for the next two years. Congratulations to Tarsus and to the Thai staff of each company because they all did a great job! We’re looking forward already for the 2020 one!
Mike Russel Vice President International Sales Mark Andy: I was very impressed by the turnout of so many influential customers from all over Asia-Pacific. This is the type of visitors that we need to make it a truly regional rather than country specific show. I am hoping that the next show expands on this.

Ranesh Bajaj, Vinsak: The country and the venue are good as expected. Surprisingly, there were more Indian visitors than those from Southeast Asia. Overall, a good show for being a first one. I am sure it will get better footfall with time.

Hope Hu, Martin Automatic: There were many visitors from Thailand, Indonesia, India and other countries, we saw new prospects as well.

Amit Sheth, Label Planet: Being the first show, it has been very encouraging and productive for long run.

David Jones, Alphasonics: We were pleasantly surprised at the quality and number of visitors from across the world. The next event should be interesting.


Vipul Gulati, Alpine Containers: Enlightening, informative and futuristic! No new inventions are complete without new discoveries.
Anuj Bhargava, Kumar Labels: Saw new products in addition to the regular ones. Well organized as always.
Rohit Mehta, SMI Coated Products: Labelexpos organised and hosted by Tarsus have always been successful. Labelexpo Southeast Asia is yet another example, visiting the show and seeing the footfall and quality of exhibits shows that Southeast Asia has huge potential of opportunity and growth.
Sanjeev Sondhi, Zircon Technologies: Like all Labelexpos, this one also delivered value; the opportunity to see and network with such a diverse congregation of printers from across Asia Pacific gave the credence and immense value to this event. I look forward to the next edition already.
On the penultimate day Tarsus held a party for the exhibitors at Hard Rock Cafe. Lisa Milburn enthralled the guests by going on stage to sing. The audience were left in awe by her talent…
Images at the show and of the exhibitor evening.