The 3-day LMAI label conference from 25th-27th July 2019 was an event that was efficiently organized and delivered the promise of comradeship, entertainment and knowledge sharing. From the time of landing at Kochi to the time of departures on 28th, it was all done with clockwork precision. It was a gigantic task of hosting over 550-600 delegates from all over India and various parts of the world attending this biennial event. They were put up in 317 rooms spread across 3 hotels The Bolgatty Grand Hyatt, The Marriot and The Taj. The event was held at Grand Hyatt, perched on 26 acres of plush green land on the serene Bolgatty Island, Grand Hyatt Kochi Bolgatty is a waterfront urban resort overlooking the backwaters of Vembanad Lake.

After a smooth check-in and registrations, the delegates reassembled for start of conference.

It all started with traditional lighting of the lamp. 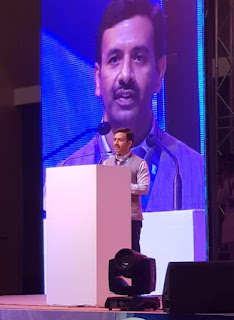 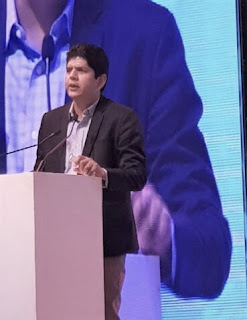 Due to a delayed flight, special guest Lisa Milburn Managing Director Labelexpo Group UK could not reach in time to deliver her address and in her absence, Pradeep Saroha country manager Labelexpo spoke to update the audience about the forthcoming Labelexpo Europe in Brussels, it being the 40th anniversary of Labelexpo additional features included will be on sustainability, flexible packaging, digital printing and a host of other technologies. 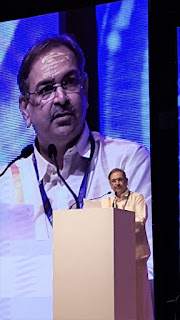 Manish Desai Conference chairman spoke on the flow of events at the conference.

Shahidi Ainain Director SIES School of packaging who was moderator for the event gave the guidelines to be followed while making presentations and advised speakers on the need for time management.

The audience dispersed to re-assemble again later for welcome dinner with Thallaavia theme.
The conference being held in Kerala, it was an imperative to give it a local theme on the very first evening. All the Board of Directors of LMAI and Committee members dressed up in the local Malayali traditional dress, giving the evening a local celebratory touch. After felicitation of sponsors by committee members and their walk on the ramp there was Carnatic band playing, networking and dinner. 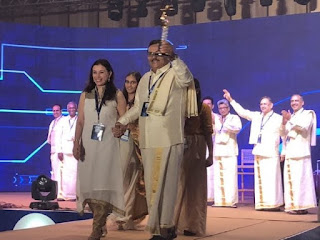 A surprise announcement was made for bestowing upon Amit Sheth of Label Planet and Intergraphic a lifetime award for contribution to the Indian Label Industry! After an emotional thank you speech, Amit walked the ramp with wife Rupa and their two daughters. 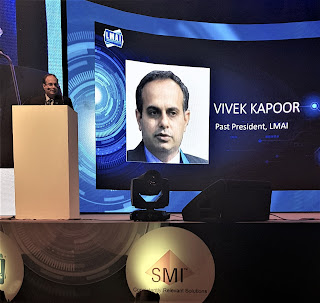 Next day after breakfast the audience reassembled for a busy day full of presentations by eminent sponsors and of very high standards. Past President Vivek Kapoor’s welcome address was followed by presentation by Manoj KM and Parag Bagade of Avery Dennison. While Manoj spoke on futuristic labelstock offerings, Parag spoke on the sustainability endeavours by Avery including collection and recycling of liner and self-adhesive waste.


Presentations made were as follows; 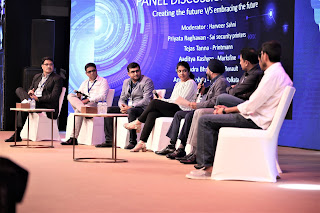 Two interactive and knowledge imparting Panel Discussions moderated by LMAI Board member Harveer Sahni of Weldon Celloplast were held after lunch. The first one was with printers where the topic was, “Creating the future vs embracing the future”. Panelists included Priyata Raghavan Sai Security Printers, Tejas Tanna of Printmann, Aaditya Kashyap of Marksfine, Mahendra Shah of Renault Paper, Shakti Jain of Great Eastern IDTech, Yudhviram Solanki of Sicon Packs and Anurag Mohan of Interact. 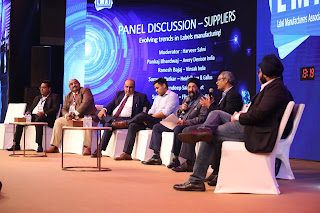 The second Panel discussion was with industry suppliers as panelists and titled, “Evolving trends in Labels manufacturing!” Eminent suppliers who were in the panel and gave thought provoking inputs included; Bhupinder Singh of Avery Dennison, Samir Patkar of Heidelberg Gallus, Appa Durai of HP, Ranesh Bajaj of Vinsak, Pawandeep Sahni of Omet, Manish Kapoor of Nilpeter, Prasenjit Das of Dupont and Sreenivas Goud of Flint. Time being a constraint the audience wished there was more time for these engaging discussions but since the schedule for the conference was so packed that there was no room for extension

After the day’s presentations ended, there was an excellent talk sponsored by SMI and Pulisi on “Secrets of Impactful Success” by motivational Guru, Gaur Gopal Das which left a full packed hall of almost 600 people spellbound and in awe of what he delivered. 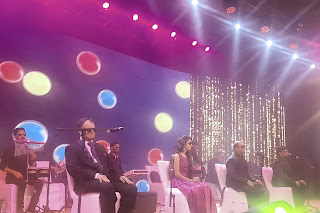 The evening ended with yet another program sponsored by SMI and Pulisi, a musical performance by the visually impaired performers from the National Organisation of Disabled Artists. They sang old Bollywood songs so well that it left the audience full of awe and at that moment, compassion turned into joy, watching their special abilities to deliver so well to a large audience. 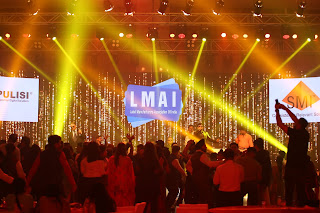 The label printing fraternity was up on its feet and on to the dance floor enjoying the renderings of this awesome group. Towards the end, the President LMAI on behalf of his team announced an additional sum of Rupees one lakh over and above what they had contracted for. This was followed by many in the audience committing large sums to support the social cause of encouraging disabled artists.


On the final day after a welcome address more presentations as mentioned below followed; 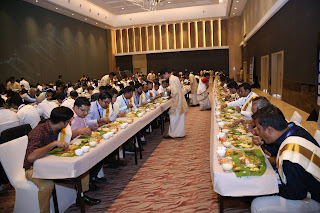 After the presentations concluded that afternoon it was time for a “Sadhya” typical of that area. Sadhya in local language Malyalam is a feast of Hindu origin and of importance to Hindu Malayalis, consisting of a variety of traditional vegetarian dishes usually served on a banana leaf in Kerala, India. Sadhya means banquet in Malayalam. It is a vegetarian feast prepared by both men and women, especially when needed in large quantities, for weddings and other special events. Sadhya is typically served as a traditional dish for Onam, the state festival of Kerala. It was a feast for the eyes to see, a diverse gathering Indians and foreigners relishing the local cuisine and eating with bare hands.

Past president Sandeep Zaveri updated the audience about the next program of Round tables, the interaction between sponsors and Printers. 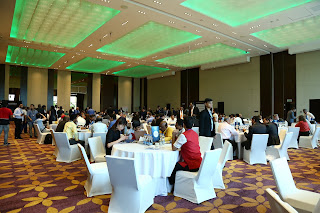 “Round tables” program with all sponsors attending to a rotating groups of label printers was a much-appreciated part of this conference. 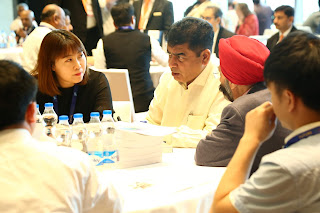 It gave the sponsors opportunity to interact with existing and prospective customers. This program was highly appreciated by the sponsors. 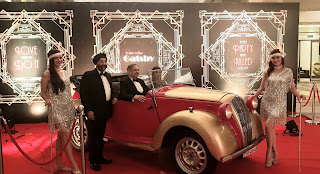 The final evening sponsored by Avery Dennison was themed “The Great Gatsby!”. 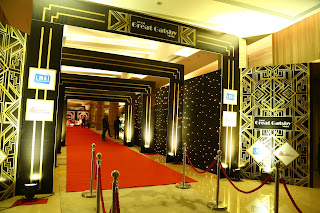 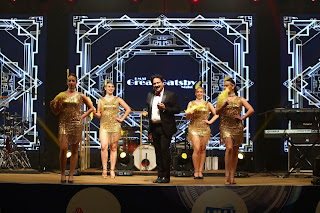 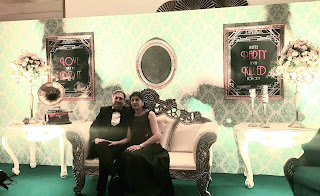 American author F. Scott Fitzgerald that follows a cast of characters living in the fictional towns of West Egg and East Egg on prosperous Long Island in the summer of 1922. Fitzgerald—inspired by the parties he had attended while visiting Long Island's North Shore—began planning the novel in 1923, desiring to produce, in his words, "something new—something extraordinary and beautiful and simple and intricately patterned.” In the novel the character Gatsby throws very extravagant, excessive parties with hundreds of guests, all for the purpose to attract a lady’s attention. The evening had the settings of the 1920s.

The evening began with a vote of thanks by LMAI treasurer Dinesh Mahajan of Prakash Labels. 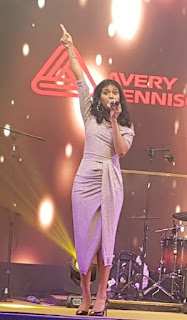 It was then time for SMI Managing Director Ajay Mehta’s talented daughter Nikita Mehta who trained in the USA and is all set to go professional in the Indian singing arena, to go on stage and give a melodious heartwarming singing performance.


Finally, while people enjoyed photo ops and networking over drinks. 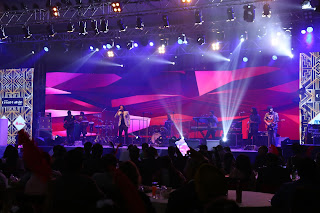 Bollywood singer Nakash Aziz took the stage while the LMAI conference delegates hit the dance floor and enjoyed the fun until late in the night.

Credit goes to Hemal Bhagwat who heads the event management company Mercury Integrated along with her husband and a dedicated team. “Thank you Hemal for making this a memorable event, memories will linger on till it is time to plan yet another better and bigger LMAI CONFERENCE”

Magazines are free to reproduce by giving credit to author.
Posted by http://harveersahni.blogspot.com at 4:11 AM