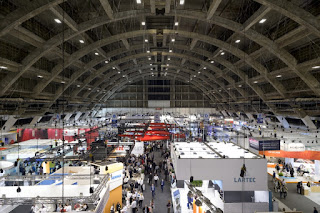 From the word go, Labelexpo Europe 2019 was a vibrant and happening show! As the show opened on 24th September 2019 the corridors started to fill up and a whole lot of cosmopolitan visitors were visible.The exhibitors were happy to get busy in the opening hours itself. The event that used to be solely targeted towards labels, has gradually transformed to extend its reach into labels, flexible packaging and package printing. Exhibitors from across the globe presented their latest innovative technologies in all segments of converting in the targeted product manufacturing arenas. From prepress, printing, decoration to finishing it was all there with a huge number of live running machines.

All exhibitors put their best foot forward making available their best technical people to answer the queries of printers and converters to help them consider or implement the adoption of  evolutionary changes coming about in the industry as showcased at the Brussels expo center or otherwise known as  Parc des Expositions center in Brussels (facing the famous Atomium) which is one of the largest and best-connected exhibition centers in Europe. 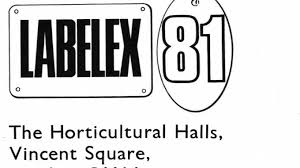 At this edition of the event the Tarsus group was also celebrating 40th year of Labelexpo, which owes its inheritance to the first show named Labelex held in May 1980 at Old Horticultural Halls in London with just 44 exhibitors consisting of label converters, label and marking machinery manufacturers and label materials suppliers. The second show in 1981 was also held at the same venue in London but had grown with 60 exhibitors and visitors coming from 30 different countries. The following year in 1982 the show was renamed Lablex International and moved to Birmingham. By 1985, Labelex International transformed to become a biennial "Labelexpo Europe" and was being held at the downtown Rogier Center in Brussels. Exhibitors by then included Mark Andy, Nilpeter, Webtron, Ko-Pack, Edale and FSK. Working flexo and rotary letterpresses became a standard feature of Labelexpo. The number of visitors also started to grow. 1987 edition of the show at the same venue saw 80 exhibitors and 5000 visitors from 38 countries. It was in 1989 that Lablexpo finally moved to Parc des Expositions center in Brussels, its present venue, with visitors coming to attend from 48 countries, making it the premier global label show. The small show that started in London in 1980 now attracted 693 exhibitors. The success of Labelexpo Europe has led to biennial Labelexpo shows spreading also to America, China, India, Thailand and now yet another show announced to be held in Mexico in 2021.

Spread over nine halls and covering almost 40,000 sq. mtrs. of floor space, up from 37,600 sq. mtrs. in 2017, the show presented the largest offering of label and package printing technologies and live demonstrations seen to date. This included the fast growing areas of hybrid printing, flexible packaging and automation.  37,903 visitors from 140 countries visited the four-day show – a substantial increase from 125 countries in 2017. India, China and Japan were especially well represented with large visitor delegations. Eastern Europe also showed a stronger representation compared to 2017, in particular Croatia, with a 51 percent increase, Lithuania (36 percent), Romania (25 percent), and Russia (14 percent). Brazil also saw a 14 percent increase on visitors compared to 2017.  Other attractions at the event included Label Academy Master Classes, the Flexible Packaging Arena; displaying demonstration and overview of two conventional and digital press lines producing indirect food contact flexible packaging to the latest GMP standards, Self-adhesive label materials workshop to understand the nature and construction of self-adhesive laminates; how they are made, the importance of materials and the need for different adhesives and sustainability and finally the insight café; showcasing the latest sustainable products and services designed to support a more environmentally conscious label and package printing industry. India's SMI was the first Indian company to have conducted a masterclass at Labelexpo by their Managing Director Ajay Mehta. On the side lines of the show, judgement for the World Label Awards was held, Amit Sheth was amongst the judges on behalf of LMAI (Label Manufacturers Association of India). 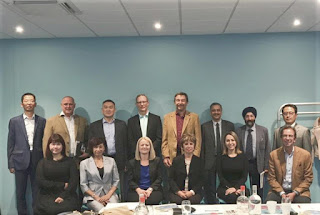 L9 meeting under the aegis of Finat was held and many other networking events took place. All exhibitors appeared to be a happy lot at the outcome of the show. Many expressed that this show was the best ever!


The Label Industry Global Awards were created in 2004 to
celebrate innovation and excellence in labels. They are the label industry's highest accolades. The awards night was held on the first day of the show on 24th of September 2019.

Diverse technologies for label manufacturing were displayed. From conventional flexo printing to extremely complex hybrid combination presses were on display.


The digital section that is growing at a faster pace than the conventional had manufacturers showcasing the various digital printing technologies including water-based Inkjet (Memjet) digital, UV inkjet digital, Dry Toner digital and liquid toner digital.

Written and collated by Harveer Sahni Chairman Weldon Celloplast Limited New Delhi October 2019
Posted by http://harveersahni.blogspot.com at 12:17 AM No comments: