Creative Graphics; Service to flexographic printers at their doorstep! 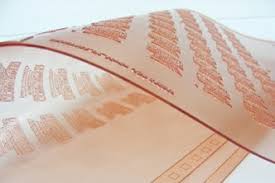 Flexographic printing has evolved from being a basic printing technology to a technically advanced process that can turn out quality prints comparable to those produced by the best of printing processes. The credit of this advancement goes to the development of prepress and printing plates. Prepress is the term that we refer to as the process to make ready the press, the design layout and transforming the design into data files that will eventually lead to producing the photopolymer plates to print the files on to paper or other substrates. A technically strong prepress ensures success in producing the right kind of printing. Deepanshu Goel, an Alumnus of New Delhi’s prestigious Hindu College from where he completed his B.Sc. Electronics in 1994, joined his parental business of manufacturing communication cables that was started by his father 35 years ago. Having been a topper in studies, he was not comfortable in the cables business and wished to do something different and more to do with evolving technologies. In 1998, a friend who was having a stack type flexo press suggested that he start flexo plate making business. Even though he had no knowledge of flexography yet, Deepanshu quit the cable manufacturing business in 2001, to start a plate making business. 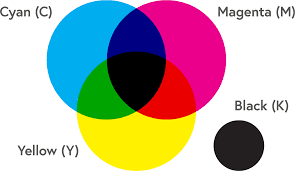 At that time in 2001, when he did not even know what was CMYK which stands for "Cyan Magenta Yellow Black" the four basic colors used for printing color images, with a meager investment of 35000 Rupees, two employees and himself to help, he started his polymer plate making business Creative Graphics in East Delhi’s Vishwas Nagar. Those were difficult days since Deepanshu had no previous knowledge of the process. He acquired literature to understand the nuances of plate making and got hands on learning as they progressed.  Soon he had to relocate due to property sealing initiated by the Municipal Corporation Delhi, for non-permissible commercial activity in residential colonies. They moved their operations to a 1000 square foot factory in Noida’s Sector 10 from where they later shifted to Sector 9 in Noida. Mistakes happen when you are indulging in a technology that is alien to you, he bought machines that were not ideally suited for flexography and instead were meant for offset printing. Since the mindset was clearly focused on to flexographic printing plate technology and not Offset printing, the machines were sold off and new equipment that was suited for flexo plate making was acquired. In an effort to further educate himself and enhance his knowledge of plate making Deepanshu acquired literature published by BASF printing systems Germany which in 2005 became a part of the Flint group. Technology for the process at that time was not freely available so he was able to sharpen his skill by reading and practically implementing what he learnt from the literature. No doubt he made mistakes but those were taken in his stride to learn the intricacies’ of producing the perfect plates for flexographic printing. 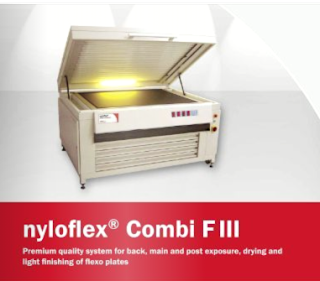 Until 2008 Creative was making plates manually with help of small basic machines. Those were struggling days. Learning and finetuning as they went along, they associated with Flint who supported them in gaining required knowledge. In 2008 they moved to their own 3000 square foot premises in sector 8 Noida. The same year they bought the “nyloflex® Combi F III” from Flint, a Compact all-in-one system for back, main and post exposure, washout, drying and light finishing of flexo plates that would produce consistent quality due to process automation. Deepanshu Goel’s very first customer was a small flexo printer followed by printers having small stack type presses making flexible packaging and catering mostly to snack producers.  The actual break came when he started to supply metal backed UV coating plates for calendar and brochure manufacturing to Rajesh Batra lead Surya Print Process New Delhi, this was their take off point. Creative Graphics’ first Narrow Web flexo label customer was Vijay Jain led A & A labels New Delhi, who were at that time producing labels for Modicare. After this there was no looking back and it was just sharpening and perfecting skills. They also started to diversify into other segments like corrugated board, flexible packaging, stationery, etc.  besides expanding their reach to other printers in the fast-growing label industry. The flexo plate business is such that no single customer is very big, realizing this fact, for Deepanshu expanding customer base was an imperative for growing his business. 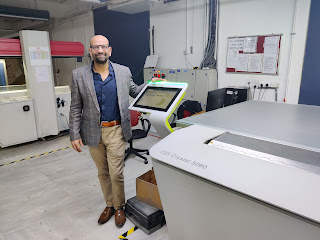 In 2008 yet again Creative Graphics acquired another 3000 square feet premises also in Noida’s Sector 8 taking their total shopfloor area to 6000 square feet. Once the economic slowdown of 2008-2010 ended, label business which was growing even during the recessionary period started looking up furthermore. In 2012-13 there was a rush of flexo press installations and it proved beneficial for the photopolymer plate business and helped Creative Graphics to grow. Added to this there was a substantial shift within the pharma, liquor, lube oil and other FMCG industries from wet glue to self-adhesive labels. Then in 2009 they bought and installed Kodak ThermoFlex Mid II Platesetter that helps turn prepress into a controlled, digital manufacturing process and enhance the quality of flexographic printing, reduce cycle times, and improve process control by eliminating variables in the plate manufacturing process. Having firmly established themselves in narrow web flexo label business, in 2012 they bought the Esko Spark digital imager followed by installing yet another processing line and a series of equipment from Dupont. 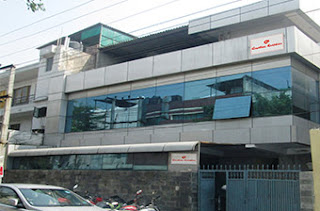 Once he was fully settled and operational in the flexographic plate making business, Deepanshu Goel decided to drive growth into his business, both organic and inorganic. He brought his total business under one company that is Creative Graphic Solutions India Private Limited. In 2017 he went on an expansion and acquisition spree by first starting operations in Mumbai then starting the Hyderabad unit that he has put under management of his brother and then acquiring the Nagesh Bakshi lead Chennai based Colordot. In 2018 he started his Baddi (Himachal Pradesh) unit bringing the total number of manufacturing units to five. Being in a service industry where time is the essence for a printer to cater to needs of large customers, he tries to be multilocational and near his label printer customers. In 2019 he moved his main unit in Noida to an 800 square meter plot in Noida’s sector 58 with 24000 square foot shopfloor. In first week of December 2020, he will be commencing production at his 6th facility at Ahmedabad. Creative Graphics is presently working out of a total 50,000 square feet shop floor area across its five units in India employing 280 people. While in this pandemic year the growth has been flat yet in preceding times, they have continuously registered 15-20% annual growth. Since as mentioned earlier in this article that a large and ever-increasing customer base is an imperative in driving this business of photo polymer plates to higher levels, Creative Graphics has done quite well. Total number of customers has reached between 700-800 out of which 250-300 are from the narrow web labels industry which is the biggest segment of their business. 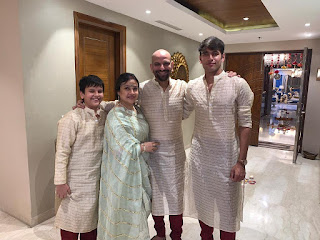 Deepanshu Goel’s wife Sarika is a home maker, his elder son Tanul is a budding cricketer studying in class 12 and the younger son Utsav is in class 6., both are studying at Pathways School. When asked whether his sons will join his business Deepanshu is clear in his mind and says, “I cannot say, they will decide for themselves as I did for myself. Times are such that decisions must emanate out of interest and passion to achieve success”.

Looking at future Creative is trying build capabilities to project themselves as solution providers. While upgrading themselves with timely investment in technology to enhance their capabilities, they are also trying support growth of flexo label industry by providing sponsorship to industry related knowledge delivering events. When asked how he sees himself in 5 years, he says “we strive to double our turnover in maybe 2 to 3 years with both organic and inorganic growth”.  On the evolution of different print technologies entering the label industry, he is not worried and insists that all will grow. Market share may get divided but by the natural growth in demand, volumes will still grow and there will be enough business for all.  In fact, he is confident that flexo is evolving as a substitute for other printing technologies. He does get a little pensive when we talk of sustainability and environmental concerns as most plates after being used up either go to landfills or are incinerated. For this he feels the larger producers of plate material who develop the chemistries are the right people to address this problem.

Printing magazines are permitted to reproduce this article only by giving credit to the author and mentioning the blog address http://harveersahni.blogspot.com

Posted by http://harveersahni.blogspot.com at 12:26 AM