Ashok Jaipuria led Cosmo Films Limited, headquartered in New Delhi, is one of the largest manufacturers of BOPP (Biaxially Oriented Poly Propylene) films in the world. According to Wikipedia they are in fact the largest manufacturer of thermal lamination films in the world. Ashok Jaipuria is prided with his lineage from an elite Marwari family (people from the Marwar region of Rajasthan).   Ashok is the only son of his father Late Sri Sitaram Jaipuria, who was an Industrialist and Promoter of Swadeshi Polytex Limited,  Swadeshi Cotton Mills Limited and was a member of the Upper House of the Parliament of India. Ashok started his own firm Cosmo Films in 1976 with an objective to manufacture and market BOPP films. He qualified in Business Administration and Marketing Science in the year 1973. BOPP film was a licensed item those days, visualizing growth and opportunity in this nascent area; he applied for and acquired the license to manufacture it. He setup and commissioned his first BOPP production line in 1981 at Chikalthana, Aurangabad. Being one of the first entrants to produce BOPP in India, the initial years were very tough, more so because customer awareness did not exist and educating them on the product was a challenge. Print lamination and self adhesive packaging tapes were the first target segments for this product. Once settled, there was no looking back, they commissioned their second production line at Waluj, Aurangabad in 1988 and third line also at Waluj in 1996.
Entering the new millennium, Cosmo Films was steadily growing, so was the market for  BOPP and also the market share of Cosmo for BOPP films. With a positive situation prevailing, they became bullish and registered unprecedented growth in this decade.  In 2001 they commissioned their fourth line and a year later in 2002 they acquired Gujarat Propack Limited, the Karjan Vadodara based BOPP manufacturer which became their fifth BOPP line. In 2003 the sixth line was commissioned and in the very next year in 2004 they decided to go for specialties in BOPP by adding a metalizer, an extrusion coating plant and yet another BOPP line taking their total count to seven. Expanding on coated products, they commissioned their second extrusion coating line in 2005. Encouraged by the success, Cosmo added five more extrusion coating lines. Two were added in 2006, one in 2007 and two more in 2008. Extending their footprint globally, in 2009 they acquired USA headquartered GBC’s Print Finishing Business from Acco Brands Corporation USA. Also in 2009 they enhanced their BOPP production capacity with yet another line at Vadodara, taking the total to 8 lines.
They wrapped up the decade by installing their 2nd metalizer at Karjan, Vadodara. In the second decade of the millennium Cosmo continued on their growth path. Pankaj Poddar also of Marwari descent, a qualified Chartered Accountant, took charge as the CEO of Cosmo Films in 2011. In the ensuing years a new plant was commissioned with their existing eighth extrusion thermal coating line in South Korea. Two more BOPP lines in Aurangabad SEZ and Karjan Baroda were added in subsequent years taking the total BOPP production lines to ten. In addition, they have five coating lines, three metalizers and one CPP (Cast Polypropylene) line. When the first line was commissioned Cosmo’s capacity was only 850 tons per annum, which now has reached 2,00,000 tons from five different locations that include three in India, one in Korea and one in USA, the biggest facility being the one in Vadodara. The production in India spreads over 100 acres of land with 850 permanent employees. Even though volume growth of BOPP was coming from packaging and lamination yet the business had sometime along the way started to get competitive. To maintain their leadership and profitability, they had in the 1990s, shifted focus to specialties in films and label films for wrap around labels, IML (that had started evolving) along with limited presence in self adhesive labels.  Out of their initial endeavours, white film for Parle and production of synthetic paper was vital in their rapid growth. 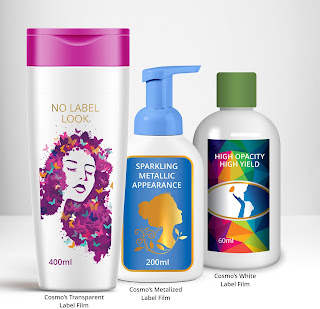 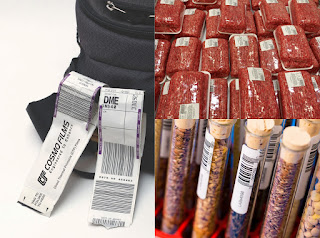 Pankaj is emphatic that BOPP consumption will continue to grow at a fast pace, but he wishes to see Cosmo diversify more into specialty segments. They will also be adding a Cast Poly Propylene film (CPP) and metalized CPP film line in 2018; they will also be installing a PET film line. Both product lines will be packaging and label centric. PET will be majorly offered as label face or later for release liner applications. PET liners can reduce the adverse impact of liner waste on the environment by bringing down the tonnage of liners using thinner liners. While most of the present paper siliconised liners go to landfills, PET liners can be recycled. Capacity enhancement for synthetic paper is also on cards. Their biggest competition at global level comes from Jindal Poly films subsequent to their acquisition of Exxon Mobil’s BOPP films division and from Innovia films. However still, Pankaj says, “We will be enhancing capacities. As for specialties, we have no real competition”. Pensively and hesitantly he does agree that digital printing direct on product that will eliminate the substrate maybe a challenge but he is confident it will not affect Cosmo’s growth plans.
Pankaj Poddar is an alumnus of Delhi’s Shri Ram College of commerce (SRCC). After finishing his B.Com at SRCC, he completed his articles to be a qualified CA and then completed his degree in MBA from IMT Ghaziabad. He worked with Ernst and Young for 7 years, for automotive parts company Delphi for 5 years two years each with Reckitt Benckiser and Avon Beauty Products. He comes from a traditional Marwari business family, his father dealt with heavy earthmoving machinery spare parts, brother traded in air-dryers and chilling plants and sister’s husband supplies alloy metal to auto parts companies. Moving away from the tradition Pankaj preferred to be a professional executive. His wife is a dietician and they are blessed with two school going children, a son and a daughter. When he joined Cosmo, the turnover of the company was Rupees 850 Crores (130Million USD) and it has now reached Rupees 1900 Crores (300 Million USD). He was awarded as “Indian CEO of the year” by ABCI, Association of Business Communicators of India at their “Brand India Summit” in 2016.  When Pankaj took charge, Cosmo Film’s share was trading at Rs.80-90 and now it has reached Rs.350-400.
Cosmo Films is an environmentally conscious company and continues to make strides in implementing eco friendly measures.  All coatings on their films are water based and they support water based ink printing for conversion of their films. They are an ISO: 14001 certified company. The waste water in all their plants, after effluent treatment, is used for gardening. All plant sites have water harvesting. Natural lighting is used wherever possible. They plan to initiate a solar power plant at their Vadodara site as a first experiment and if found successful, they will replicate in other sites as well. Every employee in their organization has to undergo training. As a part of their corporate social responsibility, they work on supplementing basic education provided to young children in government schools in and around their plants through various sustainable programs like Computer Literacy, basic English Learning, basic reading, writing, and arithmetic skills. They have trained about 150 rural youth as qualified teachers to be able to execute this and till date more than 25000 students have benefitted from these programs.
Pankaj feels in 5 years Cosmo’s turnover will more than double up from the present 300 million US Dollars to 600-700 US Dollars. This he states will be just from the ongoing organic growth. However if they install more projects and happen to acquire some businesses, the turnover may reach USD 1 billion. The present share of specialty films in the company portfolio is around 40%, he hopes and wishes to increase this share to 60% so as to keep adding value to its bottom line.
Written for Packaging South Asia magazine by Harveer Sahni Chairman, Weldon Celloplast Limited, New Delhi, December 2017.
Print Publications wanting to reproduce may do so by giving credit to the author Harveer Sahni and by mentioning that it is published in arrangement with "Packaging South Asia"