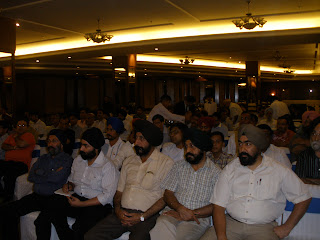 Some months ago the Tarsus management decided to hold roadshows across India to promote their premier Label show, Labelexpo India 2010, which was called “India Label Show” before they acquired it. They had already decided to hold one each in Chennai, Mumbai and Delhi. My friend Roger Pellow, the Managing Director of Labelexpo Group, wanted my opinion. I was not in agreement with him. I personally believe that the Metros and big cities have reached a point of saturation and it is now time to move to smaller towns. The real growth is coming from families of people who once thought that industry was only the forte of those who lived in big cities. A young and literate India is changing all that. They understand the dynamics of business and know that to be successful one does not have to locate in big cities. Even if we look at our label industry, we find big investments happening in towns like Sivakasi, Coimbatore, Ahmedabad, Baroda, Nagpur, Nasik, Pune, Bhopal, Indore, Chandigarh, Ludhiana, etc. I requested him to shift the last venue from Delhi to Ludhiana. I suggested Ludhiana in the state of Punjab, for many reasons. To list a few famous traits of the Punjabi’s (As those belonging to the state are referred to); they are great hosts, they are hard working entrepreneurs, they love to show and they love to splurge! No wonder the makers of automobiles like Mercedes, BMW, Audi, Jaguars, Rolls Royce, etc. make a beeline towards Ludhiana. Moreover a few years back in Ludhiana, I had the pleasure of attending an exhibition and later another label road show. The strength and unity of the local association (Offset Printers Association, OPA) was amazing! They were and still are one of the most effective trade associations in the country. Reluctantly Roger decided to give in and try what I said. Reluctantly because there were no direct international flights into Ludhiana and that the logistics were not as appealing as he would like them to be.
The labelexpo group’s final announcement about the roadshows did surprise me and others. The three shows were to be held on three consecutive days i.e. 27th September in Chennai, 28th September in Mumbai and 29th September in Ludhiana. The itinerary that Roger communicated for himself and his team was even more surprising. They were to land in Delhi on the afternoon of 26th take and evening flight to Chennai, after the roadshow next morning they would go to Mumbai for a roadshow that evening, next morning they were to fly to Chandigarh and drive to Ludhiana and later that night drive to Delhi to catch a flight to London. Anyway I left the logistics for them to worry about. I was worried if the OPA would deliver and bring the required audience to the show! I felt, maybe I have over indulged. However despite reservations my faith in this association was very strong. I called my friend Kamal Chopra, Secretary of the association to ask whether we will be able to gather enough people. In true Punjabi traditional style Kamal asked reassuringly, “How many printers do you want?” The question was the assurance. 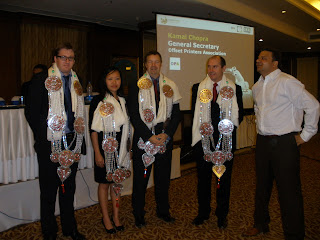 Roger landed in Delhi on a Sunday 25th September around noon and had almost five hours before his flight to Chennai. We discussed the roadshows and he was very optimistic about the Chennai and Mumbai venues but did appear concerned whether Ludhiana was the right choice. As luck would have it the Chennai and Mumbai road shows were in his words, from “Not too bad” to “OK, well, good” To put it in plain words I understood they were not up to the expectation and the turnout was small. He now hoped Ludhiana would deliver. I got worried too. While the Tarsus team was flying to Chandigarh enroute to Ludhiana, I was in a train from New Delhi to Ludhiana with my son Pawandeep Sahni. I could not resist calling Kamal Chopra and asked if he was confident that the printers will come. Yet again he laughed and said, “The press carried the news of the roadshow this morning and printers will come from many cities in Punjab and also from the neighbouring states” I was surprised and reassured once again and agreed to meet Kamal for Lunch. After checking into the hotel we went straight for Lunch with Kamal and some guests from the printing community, we were amazed to see his phone kept on ringing constantly. Printers were calling to ask about the roadshow. I was pleased. 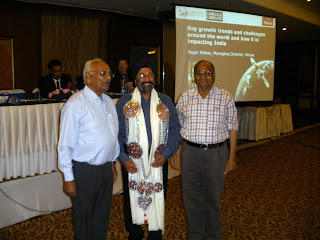 The roadshow was planned to start registration at 7PM. I and Pawan reached the venue at 6.30 PM, even before anyone from Tarsus was there. The venue was all decked up, stage was ready, Bar was laid out, Dinner tables were all set and only the guests were awaited. As the evening progressed it was surprise after surprise. The first guests arrived at 6.45 PM and at a steady pace they just kept coming in. The whole team of offset printers Association alongwith the President Parveen Agarwal and Kamal Chopra were there to welcome the guests. Representatives of MSME (Ministry of Small and Medium Enterprises) came, surprisingly the General Manager, Directorate of Industries came in and to top it all the media came in. The President OPA welcomed the guests, Roger Pellow and Andy Thomas made excellent and informative presentations. Jade Grace, Show Director Labelexpo India was the perfect hostess. Michael Hatton The Tarsus head of marketing was managing the event excellently. The OPA honoured and felicitated the Tarsus team and the important guests by presenting traditional shawls and garlands. I was really surprised and overwhelmed when Kamal Chopra called me to also to receive the felicitations for having brought the Tarsus team to Ludhiana. As I stood up to receive the honour and turned back, I was overjoyed to see the audience. It was a full house!
The evening ended with a lot of networking over drinks and dinner. The Punjab printers were happy to have delivered the taste of Punjabi hospitality to their guests. The news was on television in the local news and the Press carried it in all the leading local newspapers next morning. Kamal Chopra and his colleagues at Offset Printers Association need kudos for having made the “Labelexpo India Roadshow at Ludhiana, a roaring success!”
Written by Harveer Sahni, Managing Director, Weldon Celloplast Limited, New Delhi-110008 on 1st October, 2010.