He was a part of India’s label history!

In the early 1980s, I was only a commercial siliconiser and screen printers making stickers were my customers. Label presses had yet to make a big impact and labelstock was still not a very viable market. All the stickers that were produced were coming from screen printers. Most of the work done was manual! Exposing the negatives or positives and then producing a screen to print, it was an art. It was the pre press and press work of that time. Printing was also done manually using a squeezee on an exposed screen… He was an expert, an artist who perfected the art and pioneered the evolution of that technology. He was my first customer in Mumbai!!! I sold to him five reams of silicon paper at that time. Jagdish Zaveri was the man. Last evening on 5th of April 2014, at the age of 75 years he breathed his last. The industry pays tribute to one of initiators of label in India. Rest in peace, Jagdishbhai!
It is ironic that almost exactly a year back on the 7th of April 2013 another legend in the label industry, Kartar Singh Dunglay had passed away.
I still cannot forget the time I first visited his office in Royal Industrial Estate Wadala. My in-laws lived in Wadala at that time, so his office was very close and with every visit it became a ritual to start my BOMBAY tour by meeting him first. As I entered his office the first time, I was overawed! Elegant as he looked with his all white apparel, a Tilak (A religious symbol or a line) on his forehead, a large table; which was very clean, had fancy telephones and gadgets of those times… Jagdishbhai was class. He was passionate about screen printing as I am for labels today. When I visited him that time, he probably saw the passion that I had for the industry. He took me inside his factory to show his innovative abilities. The cleanliness in the unit was evident. It was a time when people screen printed and used wooden racks or the factory floors for printed sheets to dry. He had pioneered in using spring loaded Aluminium drying racks for optimizing space and manufacture lean so that constraint of space would not restrict continuous production. More so in a place like Mumbai where place available is always short. 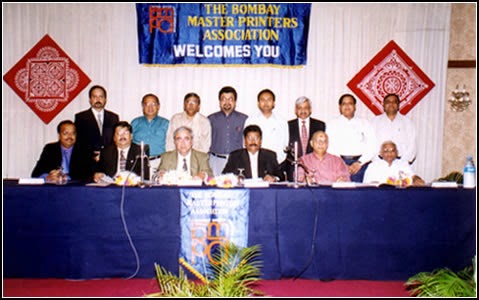 He was indulgent in his work and passionate about the industry. He took keen interest in the leadership of industry associations. As the founder president of Screen Printing Association of India, he spared and invested his valuable time for the growth of the screen printing industry. He was the Vice President of BMPA (Bombay Master Printers Association) in 2002-2003 and was also actively involved with social and sports associations. A man, who accepted change and evolution as it came, adopted the self adhesive label industry as it has evolved. He has passed on the heritage to his soft spoken son Sandeep Zaveri. Their present company Total Print solutions Pvt. Ltd. at Navi Mumbai is a successful label enterprise. Sandeep, taking the heritage forward is the vice president of LMAI (label Manufacturers Association of India) and the President of the YMC (Young Managers Club) of LMAI. His work for the label industry is widely appreciated.
Jagdish Zaveri lived an eventful life full of vigour and socializing. He strongly believed that one should give back to the society that gives you so much. He would never miss his association meetings and loved to spend his evenings with his friends in the club. He lived a full life and will always be missed by industry colleagues, family and his social associates. Rest in Peace my friend Jagdishbhai…
We ALL will miss you!
A tribute on behalf of the Indian Label Industry written by Harveer Sahni, Managing Director, Weldon Celloplast Limited, New Delhi-110008.  6th April 2014