In the chronology of self adhesive labels in India, July 2011 will go down as one of the most important historical times when the first LMAI conference was held at the picturesque Park Hyatt Hotel in Goa. The longest serving President of LMAI Vivek Kapoor and his team had targeted a delegate strength of 125 but the event was so successful that the final count was 270! Rooms fell short and delegates had to be accomodated at nearby hotels. We were in the initial stages, not sure if another conference will be held later and when. However in the end of the conference the decision was unanimous, it has to be a regular biennial event and so it is. Report of the event with pictures is available on this blog at  http://harveersahni.blogspot.in/2011/08/lmai-conference-innovations-unlimited.html
Two years on in July 2013 the Indian Label industry was back in Goa with a bang, this time at the Grand Hyatt, a much bigger venue than the Park Hyatt as a larger gathering was expected. True to expectations of the LMAI team the number of delegates crossed 390, a commendable job. World class entertainment was delivered after learned speakers had shared their knowledge with the delegates in an extremely focused conference. My report on this event as well is available at http://harveersahni.blogspot.in/2013/08/rocking-at-goa-indian-label-conference.html. At the last LMAI conference  there were murmurs that the venue needs to move to another destination but there were many who were adamant that it should remain in Goa. As time elapsed the murmur in Goa became louder leading to a decision to move the conference northwards to a heritage city in Rajasthan. Finally it was decided to hold the conference in Jaipur. 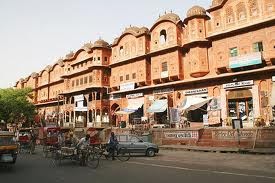 Jaipur the capital of Rajasthan state in India was founded in 1727 by Maharaja Sawai Jai Singh II, a Kachwaha Rajput, who ruled Jaipur State from 1699-1744. Initially his capital was Amber, which lies at a distance of 11 km from Jaipur. He felt the need of shifting his capital city with the increase in population and growing scarcity of water. Jaipur is the first planned city of India and the King took great interest while designing this city of victory. According to that time, architecture of the town was very advanced and certainly the best in Indian subcontinent. In 1878, when Prince of Wales visited Jaipur, the whole city was painted in Pink color to welcome him and after that Jaipur was titled ‘Pink City’. Still, the neat and broadly laid-out avenues, painted in pink provide a magical charm to the city. Jaipur is rich in its cultural and architectural beauty, which can be traced in the various historical and aesthetic places that reside in the city. This city of victory really wins the hearts of the people with its splendid charisma and heritage.

LMAI conference is slated to be held in Hotel Fairmont in Jaipur on the 16th, 17th & 18th of July 2015. Fairmont Jaipur is an ode to the pink city through awe inspiring architecture and decor, inspired by the Mughal Dynasty and Royal Rajputs of yore. This luxury Jaipur hotel is nestled amongst the majestic Aravalli hills, all 199 rooms and suites are elegantly appointed, to reflect a perfect blend of traditional Rajasthani décor and modern amenities. Over 400 delegates consisting of converters, material suppliers, consumable suppliers and press suppliers are expected to congregate at the conference venue. The event promises to deliver value in terms of knowledge, networking and entertainment. The industry constituents are already excited to share the good times with colleagues. Expecting a shortage of rooms the LMAI management has also made arrangements in hotels nearby.
Commenting on the event, LMAI President Vivek Kapoor says, “Over the years, the LMAI Conference has become an important platform for addressing various industry issues. This year we have increased the duration of the conference from two days to three days to ensure that the delegates, who travel from around the country and world to attend this event will get ample time to network and conduct B2B discussions”. Chairperson of LMAI 2015 Conference, Guraraj Ballarwad says, “The label industry in India faces significant challenges in this ever changing dynamics of label manufacturing and it is necessary to identify changing trends that help gear the Indian industry to meet those challenges.” Leading printers and Industry stalwarts have also expressed optimism and excitement at this forthcoming event. Sanjeev Sondhi of ZIRCON TECHNOLOGIES INDIA LTD. says, “This conference is an excellent platform for label fraternity to sit together and look for ways and means to make this industry more vibrant in terms of technology, operations and improving profits”. In South India, Sivakasi based Seljegat’s Raveendran feels that while industry events like this conference is a good occasion to network and share experiences with peers, yet he says, “The content needs to be more wholesome. Instead of just the sponsors making speeches, it would be better if we have neutral speakers who can shed light on the way forward.” He further adds, “Label Printers would like to dwell on what direction the label industry is moving globally and the impact of multi process printing and converting equipment in enhancing capabilities to develop specialty labels. This will help them make investment decisions”.
Finally the young Chandan Khanna heading multi-location Ajanta Packaging having multinational presence with units in Daman(India), Baddi(India), Thailand and Ajman(UAE) sums it all. He says, “The LMAI conference, which comes once in two years is an event that personally I try and ensure I attend. The presentations, open panel discussions, the getting together with your peers and industry suppliers in a relaxed environment is good for all industry constituents. I feel, positive changes occur from the networking whereby all in the industry stand to benefit. It is a must meet event. I am looking forward to being at the conference”.
With excitement building up and registrations coming in at fast pace, the LMAI conference promises to deliver value and fun in the heritage pink city of Jaipur. I look forward to an august gathering where competitors, suppliers and customers will rejoice togetherness!
The above article maybe reproduced by magazines giving credit to the author.