It was business mixed with pleasure from the word go! As delegates landed at Goa’s Dabolim airport, office bearers of the AIDC Technologies Association of India were there to greet guests. The buses were waiting to take the arriving guests to a signature property The Lalit Golf and Spa Resort which is about one and a half hour drive from the airport. Snack packets and drinks were handed over to the guest for the way. It did build an aura of excitement of great hospitality waiting for the arriving members at this event. The office bearers of the association were very excited and greeting all arriving guests with smiles and hugs. 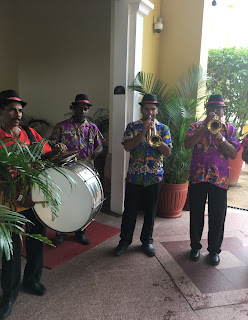 As we deboarded the bus at the hotel, a Goan band was playing for us and then the president of AIDC Viral Vyas with his other office bearers was personally there to welcome the incoming guests.  Welcoming hostesses, came forward to garland arriving guest with garlands made of sea shells and offer welcome drinks before directing delegates to the registration desk for registration collecting room keys and their summit kits. Surprising as it may seem, lunch was still being served for incoming persons till 4pm. Guests were given an hour to reassemble for the inauguration of the summit/conference. It was an amazing, widely spread out resort on the beach which was exceptionally clean.

For me personally AIDC meant it was an association somewhat like the label association dealing with blank labels, printing and providing bar code printed labels to end users. The only extension appeared that they would also supply thermal transfer barcode printers and TTR rolls with some software support. This summit was an eye opener for me personally, realizing the amount and scale of technology that members of this association are involved with. AIDC stands for “Automatic Identification and Data Capture”.  It is a broad category of technologies used to collect information from an individual, object, image or sound without manual data entry.  AIDC systems are used to manage inventory, delivery, assets, security and documents. Sectors that use AIDC systems include distribution, manufacturing, transportation, medicine, government and retail, among many others. AIDC applications typically fall into one of a few categories: identification and validation at the source, tracking, and interfaces to other systems.

As per Wikipedia, The actual technologies involved, the information obtained and the purpose of colletion vary widely.
Current AIDC technologies include:
2D barcodes store information not only horizontally, as one-dimensional barcodes do, but vertically as well. That construction enables 2D codes to store up to 7,089 characters. The traditional, unidimensional barcode has a 20-character capacity. 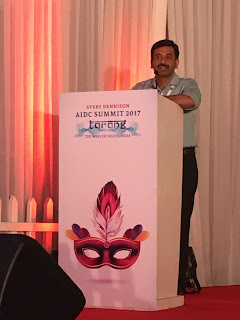 The AIDC summit titled “Tarang-The wave of digital India” was thrown open by lighting of the traditional lamp. After the secretary AIDC’s speech Pankaj Bhardwaj Senior Director and General Manager of Avery Dennison delivered the keynote address, appreciating the work of the AIDC association he added, a young and educated India is bound to ensure growth and emerging of new technologies and that Avery is committed to empowering their customers with knowledge. 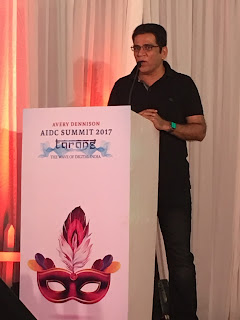 Ajay Mehta of SMI Coated papers spoke on the enhanced reach and capabilities of SMI in regards to labelstocks manufactured by them. Other presentations were made by HP, Guagzhou Shangchen Electronic company, Novexx Solution, Stic-on papers and Epson.


This was followed by entertainment program and networking cocktails. 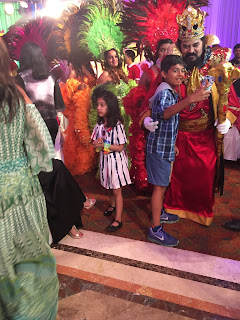 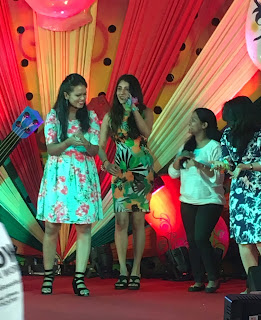 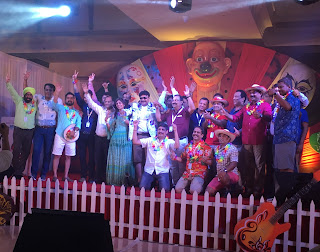 The next morning after the secretary’s speech the representative from GS1 came onstage to give a very informative lecture on the role of GS1 and the developments being made on evolution of data sharing and tracking with barcodes. GS1 India is a Standards body (registered under Societies Registration Act 1860) with founder members comprising Ministry of Commerce and Industry, Government of India, CII, FICCI, ASSOCHAM, FIEO, IMC, APEDA, Spices Board, IIP and BIS. It is affiliated with GS1® a not for profit global standards organisation. 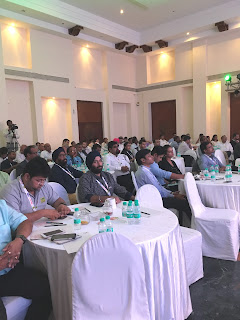 After a presentation by Avery Dennison on their products, a panel discussion took place on “Opportunity for AIDC industry in Transportation, Logistics and Retail Verticals.” Rohit Mehta of SMI spoke on labelstock selection procedures. He also informed that SMI had launched an App that can help users identify the product, its quantity, substrate and adhesive requirement. Chainway India spoke on their handheld RFID readers and devices. Ricoh Thermal informed the conference about their company, infrastructure and sales network that they have setup in India for their TTR Ribbons and other products. 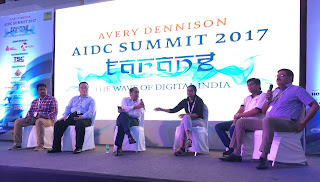 This was followed by a panel discussion on services and regulatory in respect of healthcare, Government, transportation. After a presentation by Honeywell International, the survey vertical by AIDC association was made public. 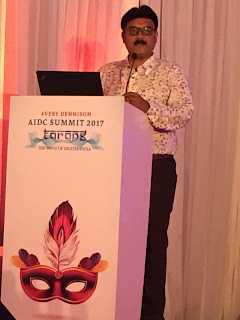 It was indeed an interesting and informative session. According to the survey out of the total 52 companies reviewed, 32 companies had revenues of less than Rs. 5 Crores, 13 companies had between Rs. 6-20 Crores, 4 companies reported revenues of Rs.21-50 Crores, only one company had reported between Rs.51-75 and 3 companies had revenues in excess of Rs. 76 Crores. As regards usage of Labelstocks Avery Dennison heads the chart with over 50% market share in this segment of the label industry. The final session had more presentations from Todaytec, PGI Technologies, Xiamen Hanin, Armor, Heyday global Retail solutions and technologies before the final panel discussion on IOT (Internet of Things). IOT speaks about computers and smart devices communicating amongst themselves for data proliferation.  It indeed was a conference full of high level of technological presentations about offerings of sponsors. There was also a table top exhibition for sponsors to display on the sidelines of the conference. 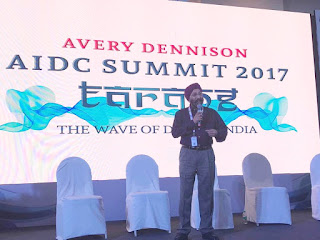 Before the conference finally came to an end the AIDC association management lead bypresident Viral Vyas called me, Harveer Sahni, Chairman of Weldon Celloplast Limited to the stage to felicitate and honour me for having spent almost 40 years in the Indian label industry and for my contribution thereof. I was overwhelmed and in my small address to the audience I thanked all for this honour and spoke on the need to mentor and empower our generation next so that the growth and expansion of the enterprises the first generation has painstaking built is infused with the energy of the youth and new ideas to take the industry forward on a path of steady and continuous growth. 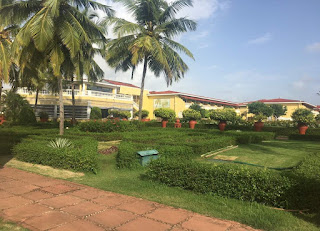 The conference ended but the fun part started with wonderful performances followed by the bar being thrown open. Feeling lighter, the members hit the dance floor and carried on till the wee hours of the morning taking back memories to motivate them to look forward to yet another edition next year. 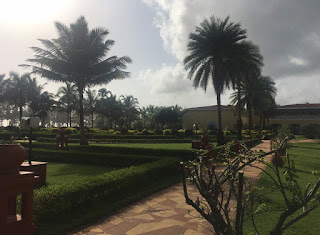 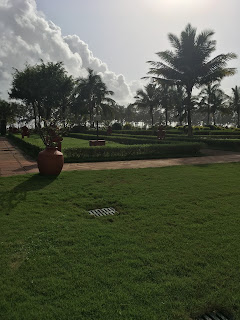