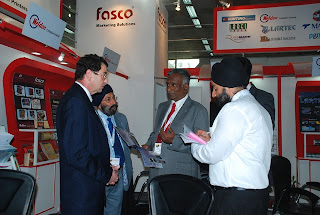 New Delhi or for that matter India, is still rejoicing at the success of being a proud host for the prestigious Commonwealth Games in October 2010. It is also the start of the festive season which brings with it feelings of celebration, elation and a boost to the markets. Public spending goes up and so does the sales of consumer products, which eventually leads to a high usage of labels. During this season we hope to see high growth rates in this market segment. The trends in the industry are already buoyant. Equipment suppliers are ecstatic at the growth in investment in Label Presses by Indian Label Printers. While many existing printers are the ones who are expanding and increasing their existing capacities yet it is interesting to note that an equal, if not more, volume of investment into self adhesive labels is coming from offset printers and flexible packaging companies.

Preceding and following the commonwealth games we have and have had a spate of shows relating to the label printing, Offset printing and packaging industry. I wonder how this situation is going to be taken up by the printers who have already been voicing their concerns about too many shows being held not only in a year but now, in matter of weeks. However at this point of time let me dwell on the fact that the Indian printers are in for an extravaganza of a show after another show! Some of the best suppliers/exhibitors will be trying to woe the Indian printers while they showcase their finest wares. The industry can look forward to multiple opportunities to learn, indulge, and technically update themselves. Fortunately for the exhibitors, the audiences they are targeting at are in a positive mood and as things stand these visitors are willing to see, investigate and shop. It indeed is time to show!
Towards the end of September 2010, Roger Pellow, the Managing Director of Labelexpo group and his team landed in India after having held a successful Labelexpo America at Chicago, earlier in the month. They held three road shows across India. In a whirlwind tour while they were in India for a week they organized road shows in Chennai, Mumbai and Ludhiana. Immediately after this it was Mumbai’s turn to showcase “Indiapack 2010” organized by the Indian Institute of Packaging (IIP) from September 30th to October 3rd 2010. Being the show of the premier government sponsored institute, it attracts a lot of interest from the major converters and users. It is interesting that majority of the packaging development managers in big companies are alumni of IIP. As we get closer to the end of the year, “Pack Plus 2010” will be held from 3rd to 6th December 2010. Just after a gap of one day “Labelexpo India 2010” will open up at the same venue Pragati Maidan. New Delhi from the 8th to 11th December. As a matter of fact both these shows were the brainchild of the husband wife team of Anil and Neetu Arora.  Anil sold his highly successful “India Label Show” to Tarsus, they renamed it as Labelexpo India. This gave the show an international perspective as it became a part of the Labelexpo series of shows around the world. The day Labelexpo will be opening its doors to printers in Delhi’s Pragati Maidan, another printing show “Screen Print India 2010” (8th-10th Dec.)will be inaugurated at Mumbai. One is left wondering how the printing fraternity is going to be at two different places in one time. As we enter the second decade of this millennium, on January 16th 2011 “Printpack India”, the prestigious show of IPAMA and ITPO will throw open its doors yet again at Pragati Maidan, New Delhi. It indeed is going to be a busy time for visitors and exhibitors. These exhibitions are expected to generate a lot of business and the market sentiments are pointing towards that. It is also time to network and meet counterparts in the industry repeatedly during this season. The printers will rejoice in the festive spirit.
On 27th of August 2010, the Label Manufacturers of India (LMAI) organized an event for their members and the label community at large. The programme commenced with the executive committee meeting followed by their AGM. After the AGM a presentation on lean Management was made by Dr. Mohan Parmeswaran and was well received and appreciated by the printers. The evening culminated in welcomed networking over cocktails and dinner. It was an extremely successful evening, rarely witnessed before, in the industry. It was a proud moment for the LMAI president Vivek Kapoor when 120 guests turned up to give value to the eventful evening. The camaraderie and networking was evident and brought satisfying cheer to the printers. They were sharing thoughts, gossips and discussing technical up-gradation. The evening ended on a happy note with many a printers shaking a leg or two on the dance floor!