This is a very interesting story of an Indian Sandeep Lal and his family from Allahabad, a city in the most populous North Indian state of UP. They left India after having lost their business and travelled to foreign lands where they worked their way up to glory from scratch! I wrote about Sandeep Lal President Metro Label in Canada  in April 2009 for a magazine, but somehow it escaped my attention to post it on this blog. Metro Label is now a celebrated company headquartered in Toronto Canada. Recently they celebrated their 40th anniversary which was covered by the world press. I reproduce first the article printed in newspaper "Toronto Star", a link to the video on them and then the article that I wrote on them in April 2009. 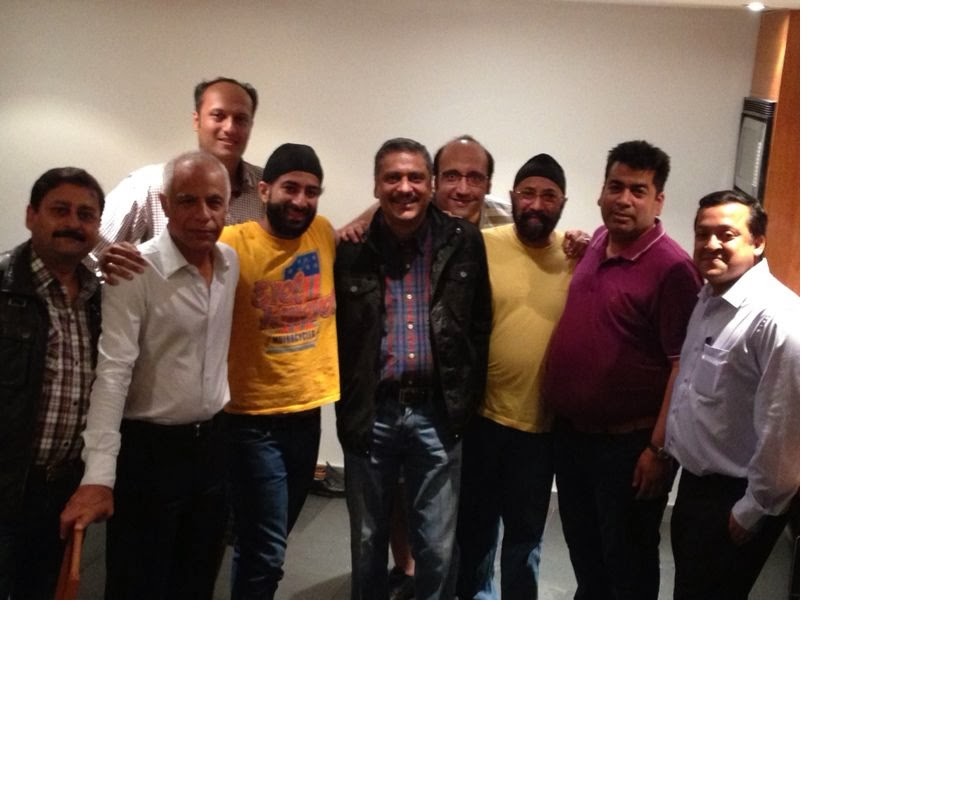 At the last labelexpo in Brussels 2013 many of our Indian label printers attended a dinner at my apartment alongwith Sandeep, it was a fun evening when we cooked ourselves and exchanged stories of our inheritance and the way forward. I also reproduce one of the pictures of that evening.

AS ONE OF THE COUNTRY’S LEADING LABEL MANUFACTURERS SCARBOROUGH’S METRO LABEL HAS A LOT TO CELEBRATE AS IT MARKS ITS 40TH ANNIVERSARY. AARON HARRIS/TORONTO STAR Metro Label president Sandeep Lal, left, vice-president Nandini Chaudhary, Curran Chaudhary in charge of marketing and design, and chairman Narinder Lal are part of a family business that has become a top player in label manufacturing.
The company, which Narinder Mohan Lal founded in the family basement in 1974, has blossomed into one of North America’s top players. In addition to the main 132,000 square foot Progress Ave.-Hwy 401 facility, the 180-employee firm also has locations in Vancouver and Napa Valley.They produce pressure sensitive labels for a wide range of consumer goods, including internationally known cosmetic and liquor brands and the private labels of big Canadian grocery chains.“They have a very good reputation as progressive and eco-friendly manufacturers; and a tremendous reputation for customer service,” said Canadian Packaging magazine editor George Guidoni.
“The label market is roughly a $35 billion market worldwide, but there are hundreds of label printers around the world trying to get a piece of that market, so they do have to be competitive,” said Florida-based packaging strategist Michael Ferrari, founder of Ferrari Innovation Solutions LLC, who lauded Metro’s “culture of innovation and constant renewal.“There are mergers that happen all the time in this industry and obviously they are strong enough to stand on their own rather than either going under or having to sell out. Mergers and acquisitions have been rampant in this industry in the last four years.”
The family business, which transitioned from wholesaling to manufacturing on the strength of a $15,000 machine in 1976, realized exponential growth in the 14 years ending 2006 when revenues peaked at $63 million. The firm’s holdings include a golf course and residential development in Panama where they are considering launching a label business. But there have been hiccups. Business fell when the economic decline, price deflation and competitive pressures forced the 2011 closure of a fourth location in Montreal.“The U.S. recession cost us a lot of jobs; many of our customers got acquired which also cost us business,” said Sandeep Lal, who took over as president from his father in the early ’90s. “In the last two years we’ve grown our business by 30 per cent again. We’re climbing up to where we were and to get past that.”
He identified growth areas as pharmaceuticals, cosmetics and beverages, more so than supermarket perishables — meat, deli, bakery — which once commanded as much as 85 per cent of their output.
The offerings have also expanded to include glue applied labels, seen on water bottles; mould labels which are part of the container like on detergent containers; and shrink sleeves typically found on beverages.Differentiation is tough in such a competitive industry, noted Lal.
“Being green was one way to do it and the rest is all about service; and today price is also important; it never used to be,” he said. “We’re trying to be more efficient in manufacturing with newer product lines that can operate at higher speeds and then produce lower waste.”But there’s no compromise on environmental aspects. The 999 Progress Ave. HQ, completed in 2005 for $13.5 million, was designed to cut energy use and emissions. Among the initiatives: rainwater is collected to flush toilets; the use of waterbased inks instead of solvent-based inks; and exhaust from printing machines is filtered to heat the building in winter. The firm is currently awaiting building permits to install solar panels on the roof.“We wanted a green plant because we wanted a good place for our employees to work,” said Lal, 59. “It may sound corny but as an entrepreneur I feel I’m responsible for the health and welfare of the people that work for me, that I have a responsibility to them.”The eldest of four children, he dropped out of university to work with his father who had been a pharmacist in India, but couldn’t get similar employment here.
“As immigrant families we all arrive here and you want to somehow get to a point where there’s some financial security for the family. I remember late at night when my parents didn’t think I could hear them talking about how the bills were going to be paid this month or next month. “Those are difficult discussions to hear. You make choices to be part of the solution. For me working in the business rather than continuing in my studies was being part of the solution.”
Narinder, 85, comes in for an hour or so each day. He signs cheques, mingles with the staff and lights incense. His daughter Nandini Chaudhary is vice-president and her son Curran Chaudhary, who joined the company full-time in January, oversees marketing and design.
“Time will tell whether he has the skills and the motivation and the determination, but definitely it would be good if he does,” said Lal of the recent graduate and only member of the third generation at the firm.Curran, 23, has been pushing Metro’s online presence through social media, search engine optimization and Google advertising.“I want to see how it goes; obviously I’d be more than happy to continue the legacy but it depends on what’s best for all of us,” he said of his tenure.
His grandfather’s daily visits are a constant reminder that “hard work is everything; and determination and perseverance are enough to achieve anything.”