Pamex is the flagship event of New Delhi based All India Federation of Master Printers (AIFMP) which has been held for 23 years. AIFMP represents 59 affiliate associations across India and aims to be the country’s pre-eminent organization in developing cooperation among national, regional and global print specialists.
The scope of the show
The topics that Pamex 2015 attempted to cover were print, package converting, narrow web printing and corrugated packaging. The venue in Mumbai where the show was held from 9–12 December at Bombay Exhibition Centre (BEC) was widely spread out in a huge hall with over 300 exhibitors. Altogether 20,441 registered visitors came to the show and a total footfall over the four days of exhibition was over 40,000. It was interesting to see the fairly large show area buzzing with visitors from the very first day!
The two major Mumbai printers associations, The Mumbai Mudrak Sangh (MMS) and theMaster Printers Association (BMPA) supported this event. MMS was the affiliate partner organizing the International Technology Conference on the periphery of the show. It was their President Tushar Dhote who toured across large areas in the state conducting road shows which brought in many visitors to the show and the conference, creating unprecedented success. Even though the show is largely aimed at offset printers one could see the narrow web label segment also visible both in terms exhibitors and visitors. At Pamex, one could sense that the printers are now ready to experiment with the integration of various print technologies and attempt various segments of printed and packaging products to register growth.
Bombay
Label printing in a lower profile 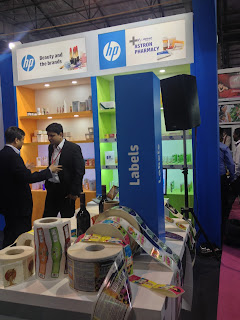 Since it was primarily a show for commercial printers and large suppliers to the print industry who cater to the commercial printing, narrow web printing and the packaging segments kept their exhibits in the narrow web segment in a lower profile even though concerned managers were present to attend to specific customers. HP who had a large presence exhibiting digital printing equipment for commercial printing exhibited digitally converted labels and lamitubes on their stand. A. Appadurai, country manager – Indigo and inkjet solutions, HP India, personally explained the digital conversion of labels and packaging. The company also hosted a knowledge session for cosmetics brand owners and agencies at its stand, showcasing the possibilities in labels and packaging using HP digital printing technology.
Printing and converting on display 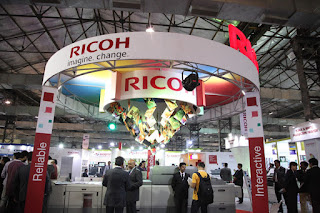 Ink supplier Flint showcased their new UV LED ink called EkoCure, demonstrating this at the stand of UV Graphics. In addition, Flint also exhibited their range of UV cleaners, flexo inks and press room chemicals. Even though global label substrates supplier Avery Dennison did not have their own stand their team lead by Pankaj Bhardwaj, Commercial Director was present and promoting their solutions for digital printing for sheet fed machines at a stand shared with their distributor. Chennai based Monotech Systems Limited who is a channel partner for UK based Focus Label Machinery and UVRay Italy for UV lamps were displaying their JETSCI VDP inkjet label printing machine. Ahmedabad based R. K. Label Printing Machinery showed their entry level rotary die cutting machine with slitting arrangements, well suited for barcode and plain labels. According to Naresh at their stand, they would soon be launching their indigenously produced nine colour rotary label press. They sell 25 label presses per year out of which 10–12 are rotary and the rest are flat bed printing and die cutting machines. They will exhibit their new equipment at Labelexpo India 2016.
The Mumbai based Label Planet group headed by the LMAI (Label Manufacturers Association of India) founder and director Amit Sheth were offering a range of products at their stand. These included Orthotec Label presses of Taiwan, Weigang label presses of China, Packers Ram punching equipment of Korea, Cartes label equipment from Italy and UV digital inks from Inktec USA. Amit Sheth said, “We are also launching Dilli UV presses from Korea with whom we have a strategic partnership”. Manish Hansoti, managing director S Kumar Multi Products, Ahmedabad, was happy to be displaying the only running label press at his stand in Pamex 2016. S Kumar is the Indian agent for Chinese press manufacturers Zonten. The press on display was a six colour tower type machine with cold foil. Manish said, “By Labelexpo India 2016, the Zonten press population will grow to 50!” He further added, “We are soon launching a full servo model”. Mumbai headquartered Genius Flexo machinery Pvt. Ltd. lead by Vijay Pareek were exhbiting information on various products of their foreign principals offered by them. These included MPS and Codimag label presses, Pamarco aniloxes, Rantec plate mounter, Eye C inspection systems and Polymount sleeves. Another label press distributor Standard Printers Providers, who are veterans in this line, were offering the Taiwan made Taiyo label presses. The father/son team consisting of J Sachdev and Gaurav Sachdev did not wish to divulge the number of Taiyo presses installed in the country. Morsef Machines agents for Tangshan Wanjie, China were displaying information on label presses offered by their principals. Bodhi Professional Solutions launched VeriPak 3D, a complete 3D visualisation tool for graphics professionals in the print, packaging and labelling industry. Provin Technos who represent Spanish label press manufacturers Rotatek were present in a big way but information on the label press was limited to signage only.
Leading label printers from across the country were seen visiting the Pamex exhibition including Narendra Paruchuri of Pragati Hyderabad, Raveendran of Seljegat Sivakasi, Gururaj of Signode Bangalore, Manjunath of Global Graphics Bangalore, Kuldip Goel of Anygraphics Noida, Sanjeev Sondhi of Zircon and all the leading Mumbai printers. One of the reasons for a high number of label printers was that the LMAI was holding a networking event on one of the evenings and for which the label printing fraternity had congregated in Mumbai.
The conference programme 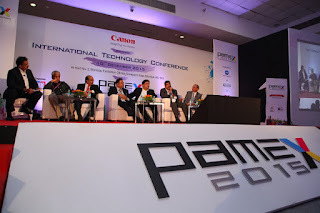 On the side lines of Pamex at the same venue a conference titled “International Technology Conclave” was held. The conference was attended by over 200 delegates. It started with an inspirational keynote address from Manoj Mehta past President of AIFMP and the Director of Manipal Utility Packaging Solutions, which is a part of the Manipal Technologies group who have substantial interest in the label printing business. Manoj Mehta gave his ten commandments which he called, “Dus Ka Dum” meaning “Power of Ten”, for printers to be efficient, growing and profitable. A. AppaDurai of HP India gave an insight into the benefits and comparable advantages of inkjet digital printing. He dwelled on many issues that are a deterrent in many printers decision to invest in digital printing equipment.
Paolo Grasso, export area manager of Italian label press manufacturer Omet and Harveer Sahni of 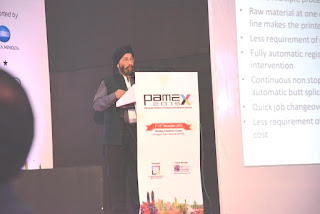 LED-UV has been attracting the attention of printers in all segments of printing whether offset or label or digital. Vinay Kaushal director of Provin Technos enlightened the audience on this emerging technology. According to him, “In Europe, the use of UV lamps with mercury is banned. Hence, LED UV is the only possible technology solution for the future as it is a green technology.” He added, “It is a myth that LED UV inks are expensive. The cost of these inks is comparable to regular inks.”
Printed electronics is another area which is growing rapidly with advancements in technology enabling printing of circuits on flexible materials in roll form to bring down cost of production as also the size and weight of modern day electronic devices. According to Wikipedia, “Printed electronics is a set of printing methods used to create electrical devices on various conventional substrates. Printing typically uses common printing equipment suitable for defining patterns on material, such as screen printing, flexography, gravure, offset lithography and inkjet. By electronic industry standards, these are low cost processes. Electrically functional electronic or optical inks are deposited on the substrate, creating active or passive devices, such as thin film transistors; capacitors; coils; resistors. Printed electronics is expected to facilitate widespread, very lowcost, low-performance electronics for applications such as flexible displays, smart labels, decorative and animated posters, and active clothing that do not require high performance levels.” Ashutosh Tripathi, team leader at National Centre for Flexible Electronics, IIT Kanpur spoke on the future growth potential of printed electronics that is likely to escalate to a level of USD 330 billion by 2027 opening immense opportunities in this line.
The conference was organized quite well with the content being very diverse and informative. There has been a thought process that the conference venue should be different from the exhibition venue as the speakers and delegates are tempted to take time off in between their visit to the exhibition.
A well-attended show
As initially mentioned, the exhibition was well attended right from the first day. However, more working printing presses would have added to the value that this successful show has created. This satisfying result will surely attract more companies to come forward to exhibit in an effort to gain a foothold in a growing market such like India. Despite this, the show compensated in many ways as there was a lot of ancillary and complementing equipment on display to keep the printers busy and involved. The level of satisfaction in visitors and exhibitors indicate that the 2017 edition of Pamex, which will be held 18–21 December, will be bigger and better.
Hopefully it will also have more label industry participation.
Written Exclusively for Narrow WebTech Germany by Harveer Sahni, Managing Director, Weldon Celloplast Limited, New Delhi-110008 December 2015.
The article maybe published with the permission of Narrow WebTech Germany giving credit to them and to the author