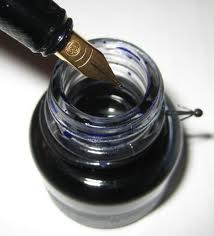 The skill of writing grew out of the early civilization’s quest for a way to communicate efficiently. Before the advent of a systematic scnpt, man used various ingenious techniques to make himself known. Monuments were, for instance, erected on graves not so much to glorify the dead but to perpetuate their memory. One of the commonest devices used by our forefathers to remind themselves of tasks to be performed was to tie knots in a handkerchief. The Ecuadorian Cara tribes put pebbles of different shapes colors and sizes in a small wooden box to record numbers or events. The Lu-tze on the Chinese Tibet frontier is believed to have at one time called their enemies to battle by dispatching a message in the form of pieces of chicken. Three pieces of chicken fat and chili all wrapped in red paper; the meaning of this message: “prepare to fight at once”
Systematic and conscious writing started in the middle of the 4th millennium B.C. and with it started a demand for improved writing materials. The first written words are found etched on stone, later the Egyptians invented papyrus or parchment from which the name paper is derived. Before the invention of paper in A.D. 105 by Tsai-lun, a minister of agriculture in the court of Ho Ti, the Chinese wrote on silk and thin fibers of wood and grass.
As for writing instruments, a reed cut like a quill pen came into use late in Egyptian 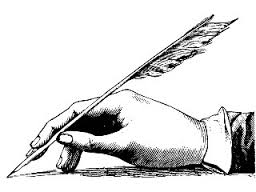 history while bronze pens appeared in the Roman period.  Chinese and Japanese writings were however done with a small brush or a hair pencil. The quill, the English pen (Derived from the Latin word Penna meaning feathers), the French plume and the Germen feder were used by Europeans till as late as the first quarter of the 19th century. With the birth of writing, papyrus and the pen, appeared also the “writing ink. Ink, the term for any writing fluid, got its name from the old French word “Encaustum”. That name referred to encaustic wax painting but was applied to iron gall ink, presumably due to its caustic, eroding action on vellum made from calf skin.
The earliest ink was made from carbon and all writing was done with it, through the classical times and it still continues to be used in the East. Those inks were made from carbon soot (Lamp black). Carbon black suspensions in water with shellac are still used and sold as Indian Ink, Chinese ink or Drawing ink. In the earlier times illuminating inks were sold as water soluble cakes, similar to the water colours of today. These were actually sold in organic pigments like Red Ochre, Yellow Ochre, Gypsum, (white), Malachite (green) and blue frit. Writing inks of today are a far cry from those early concoctions. Ink making which is still an art, has also been caught up in the hi-tech wave and today we have specialized inks of the finest quality for every type of pen; Fountain pens. Ballpoint pens and Porous tip pens.
Fountain Pen Inks: 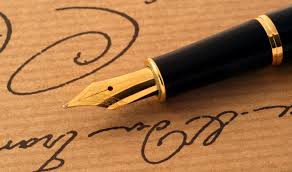 There are two main types of these inks .The water fast blue – black inks and the easily washable dye-based inks. The water fast inks are solution containing Ferrous Sulphate, Tannic or Gallic acid with small quantities of mineral acid and soluble dye.  It is widely believed that iron writing inks originated in early medieval times. Iron inks were used to write on parchments in the 7th and 8th centuries Iron inks were developed further with the advent of skins as writing materials. In the beginning gall extract was derived from gall nuts. The extract was blended, with wine, vinegar, ferrous sulphate and   gum. The ink thus formulated was subjected to prolonged fermentation and the atmospheric oxidation led to the formation of blue-black precipitates. The first English ink factory established by Stephen in 1834 used a revolutionary ink making procedure which truncated the role of fermentation and eliminated the time consuming process of oxidation. The soluble pale ferrous salts get oxidized into insoluble blue black precipitates within the paper fibers after writing. Therefore, blue-black ink is used to maintain records. A good writing ink should be a fine, odorless, non-poisonous fluid, stable in glass, non corrosive to metel pens and fountain pen plastics. It should have good colour that does not get washed away on prolonged soaking in water. All these qualities are present in iron gall inks.
Washable inks are simple solutions of dyes. They contain a certain amount of gum as a thickener and to restrict feathering. Man’s desire to develop writing instruments did not end with fountain pens. In 1889, A Werner patented a primitive type of the ball-pen. The find revolutionized stationery business and reduced fountain pens to antiquity. Already in the developed countries it is hard to find a bottle of fountain pen ink. In 1936 the French introduced a more advanced ball pen in which a manually operated pressure device allowed the application of a column of ink against the rotating ball. J J Biro, improved upon this with his Biro pen in 1939 and during the war years these pens were manufactured in Argentina. With the arrival of the ball pen started the development of ball pen inks
Ball Pen Inks:
A special type of ink is required for ball point pens. One of the earliest makes 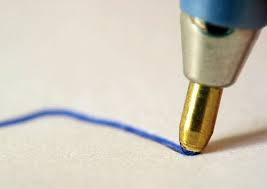 patented by Werner in 1898 consisted of a solution of lamp black in castor oil. The main requirement for ball point pens are that the ink should be stable, it should not clog, it should flow freely when slight pressure is applied to the ball tip and when the ball rotates at the same time it should not leak. One of the most important requirements is that it should be absolutely free from any particles because the smallest particle may scratch the rotating ball, hindering ball rotation and thereby, either rendering the pen useless or giving a very bad writing. The ink is fed by a capillary tube through the clearance between the ball and its housing. It leaves a thin layer of ink on paper as the ball rotates. Since the ink film applied on paper is very thin, the ink has to be highly concentrated.
The early oil- based ball pen Ink are not much in use now. These inks consisted of solutions of dyes in oleic acid. The viscosity and wetting of ball was improved by adding ester gum and castor oil.  As the specifications and requirements of these inks became more exacting, glycol- based quick drying inks based on resins in alcohol-type solvents came into vogue around 1951 and have been extensively developed in the last two decades. They dry better, smear less and have little tendency to transfer on most grades of paper. Materials used successfully for these inks include glycols soluble pthalo cyanine dyes etc. Recently an erasable type of ball point pen ink has been patented. This is essentially a two-phase system. One consisting of the solid colorant is the discontinuous phase and the other consisting of cohesive properties is the continuous homogeneous phase. When writing upon paper the continuous phase precipitates and blocks the pores of the paper thereby not allowing the colorant to penetrate and bind with the fibers of paper. The colored layer thus formed can be easily eased without damaging the paper surface.
Porous tip pen inks: 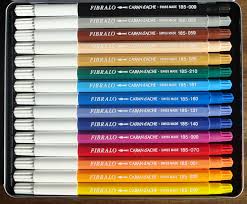 These inks must remain moist and must be of the non-evaporating type. They generally dry by absorption in paper.  A humectant (glycols glycerine, etc.) is used in their formulation. However as a variety of writing instruments are being designed a generalized ink can’t be formulated. For each type of system specific inks have to be formulated after studying the material of construction of the writing instrument, its writing point and the surface to be written upon. At times the atmospheric conditions of places where the pens have to be sold have also to be taken into consideration.
To the end, it would not be out of place to mentions that ink making, even though it incorporates the best technology, yet remains an art in the hands of the ink makers.