In scorching heat with Ahmedabad temperature soaring to 46 degrees Celsius Rajesh Nema, honorary Secretary LMAI was driving from Indore to Ahmedabad, a six hour drive to reach the venue of yet another technical workshop organized by LMAI (Label Manufacturers Association of India). That is commitment!  This is the fourth in series of  Technical workshops organized under the leadership of the young LMAI president Sandeep Zaveri. It was held at Hotel Novotel Ahmedabad on the 14th of May 2016. The LMAI leadership team reached the venue a day in advance or in the morning of the event to foresee that the Ahmedabad printer members have a perfect workshop and networking opportunity.
The host for the evening was Jigesh Dani from Maharshi Labels, a leading label printing company in Ahmedabad. Jigesh himself painstakingly made the arrangements at the hotel and also interacted with the local LMAI members to be present and ensure success of this event.
Almost 90 delegates attended the workshop, making it a very successful event. The printers and suppliers had enough time before and after the presentation to network and exchange views on the issues their industry was facing.
After welcoming the guests Jigesh invited the first speaker Neeraj Muni from Electro Optics to address the audience. Neeraj extensively explained the difference in blade angle for films and paper. The angle is broader, say 90 degrees when you have to cut a paper stock because after initial penetration into the paper the rest of the paper is crushed apart however in case of films a sharper angle is imperative for the blade to pierce into the film and effectively die-cut it. He also spoke about common problems faced like through punching, uneven cutting, die wear, etc. He also advised how to clean and store the dies for better die life.
Neeraj Jagga from Xeikon, now a part of Flint group, spoke next. He briefly dwelled on the reasons why label printers have so far stayed away from digital printing and then went on to further explain why powder toner technology was better than liquid ink digital printing technology. According to him in case of powder toner the dry powder sits on top of the paper unlike the liquid that penetrates the paper thereby interfering with the chemistry of the paper. The advantage of using dry toner technology is that it is approved by FDA, printed matter is light fast and does not penetrate the packaging paper substrates. He agreed that for long runs it is expensive to use digital however it is ideal for short runs and that so far it is recommended as a complimentary printing technology and not a mainstream system for large printing houses.
LMAI awards distribution function is a standard side event for Labelexpo India held every

alternate year. It has been observed that a very small number of companies apply to participate in this competition. As a result we see the same company going to the stage for one after another award. It is now the endeavour of the LMAI leadership to try and have widespread participation from an increased number of LMAI printer members. The LMAI honorary Secretary Rajesh Nema and the President Sandeep Zaveri took the stage next to appeal for all converter members to come forward and send entries for LMAI awards in greater numbers. As an incentive to encourage wider participation the duo announced that the first entry from each member would be free. Fees will be charged for subsequent entries. It was also felt that fancy presentations made by large label printers influenced the judges more than the actual label entry. To offer a level playing field, LMAI have distributed a standard kit in which label entries can be made. It was also informed that Premier Marketing was the firm that had been appointed to coordinate the collection, compilation and conducting of the label competition. LMAI is also organizing the next technical workshop at Kolkata on 15th July 2016 thereafter they plan yet another series that will commence from Mumbai.

Ajay Mehta, of SMI Coated papers, a leading manufacturer of self adhesive labelstocks spoke on the various types of components in Labelstocks. He discussed different facestocks, adhesives and release liners. He also spoke on what effect storage and application temperature has on the final label.
Amit Ahuja of Multitec, has been the front runner in taking Indian label press manufacturing being acceptable at global platforms. He spoke on nuances of label printing and converting on flexo rotary presses. He also informed about further developments being made in label presses that are made in India.
Chirag Gokani of Wealthwiz, gave an informative presentation on wealth and estate management. He also discussed the process of creation of will, setting up of various trusts, their management and how to store the documents so that they are traceable and manageable by the inheritors.
Finally Harveer Sahni of Weldon Celloplast conducted an interactive question and answer session. Starting with a discussion on blade height for different types of adhesives other topics discussed were reduction of waste in label production, impact on price of labelstock by supplying EXACT width not matching the deckle width,  impact of different climatic zones in the country on performance of pressure sensitive adhesives and avoiding wastages on a label press. Finally when the audience was asked to raise questions on wealth and estate management surprisingly there was absolute silence. Summing it up Sahni said, “It is a typical of Indian businessmen not to discuss their financial queries in public.” 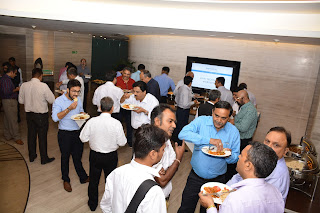 Leading Printers who attended the program included delegates from Astron Packaging, Maharshi Labels, Letra Graphics, Pinmark, Art O Print, Unick Fix-a-Form, Nitai Labels and Ankit Graphics besides others. Media presence was from Print week, Packaging South Asia and Printing Samachar. Vote of thanks was given by Rajesh Nema followed by a networking dinner.
The above article maybe reproduced or published by magazines giving credit to author.