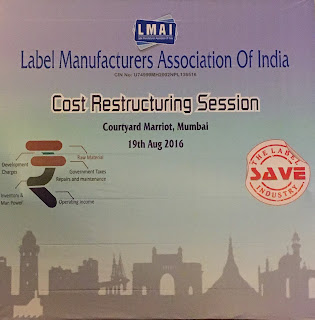 The label industry in India has in recent times been facing intense pressure on costs and reduced margins, making it difficult for label printers to sustain the required rapid growth. Leading FMCG companies continue to pressurize their purchase and sales teams to be aggressive so as to firm up their bottom line as also their top line. As far as printers are concerned both these measures are adversely affecting them. While a better top line for end users of labels even though it translates into higher sales, yet it means that the sales team will be offering freebees and schemes to customers putting pressure on the bottom line, so eventually the pressure is passed on to the purchases to maintain margins. The print buyers tend to squeeze the label suppliers to the maximum so as to prove their contribution to the bottom line. When suppliers started to resist reduction in prices, buyers have now unleashed the dreaded tool of reverse auction thereby putting label industry peers in confrontation amongst themselves. Despite despising the process and most printers agreeing that it is a very big dent on their balance sheets yet to retain the sales volumes that they need to project to their bankers, they still participate in reverse actions in hope that they will get a piece of this large pie which may not be as sweet as desired but will at least add to their sales. In earlier days it was a simple thing for them to pass on the decrease in price to labelstock manufacturers but intense competition, increasing paper and polymer prices have pushed even the labelstock producers against the wall. With wafer thin margins they have their hands-up in despair already. 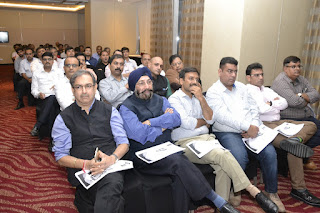 Modernisation is another imperative that has to be indulged in on an ongoing basis. Print buyers show preference to suppliers who possess top of the line label presses with enhanced capability to print convert and decorate labels with multiple printing technologies. Capital equipment acquisition costs continue to escalate and indulgence in it brings increased debt to be serviced on depleting margins. ROI (Return on Investment) is now a word that stirs in worries for most printers. A growing market makes economies of scale a necessity to retain market share and margins needed to service increasing liabilities and expenses. Increased sales means higher inventory levels and larger working capital requirements, further increasing the borrowings. Indian label printers decided to huddle together in an effort to dwell on this dilemma and try to find a lasting solution that would facilitate faster growth and stem the depleting margins. Sensing the mood and needs of its members, Industry association LMAI (Label Manufacturers association of India) organized a COST RESTRUCTURING SESSION IN MUMBAI ON 19TH AUG. 6 PM onwards at Courtyard Marriot Andheri. 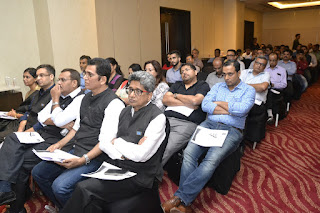 Normally in such meets the supplier members are not called as it is evident that the first attempt will be to try and reduce the cost of the inputs which may put the suppliers in an embarrassing situation or in direct confrontation with their customers. However the LMAI management thought differently and considering them as stake holders in the industry they invited suppliers to join in, witness the proceedings and understand their situation. It sure was interesting to note that leading suppliers of materials and equipment like Avery, UPM, SMI, Gallus, Labelplanet, Weldon, Genius, Fujifilm, HP, Electro Optic, Henkel, BST, Multitec, SKumar and many others attended this meet. It was appreciable that many of the leading suppliers gave their suggestions and inputs on how they felt the printers could produce more cost effectively and add to the receding margins or stem the slide. The meet was attended by over 100 delegates out of which, almost 70% were printer members. Stalwarts in the Indian label industry from all zones marked their attendance at the event, some of the most prominent seen there were Arvind Shekhar from Sai security Bangalore, Chandan Khanna-Ajanta, Manish Desai-Mudrika, Vivek Kapoor-Creative, Sandeep Zaveri-Total Print, Denver-Janus, Gautam/ Venkataraman-Skanem Interlabels, Rajesh Nema-Pragati Indore, Mahendra-Manohar Pkg, Amar Chhajed-Webtech, Karan Kapur- JK Fineprints, Sandhya-Synergy, Jigesh Dani-Maharshi Ahmedabad, Sanjeev Sondhi-Zircon and many more. 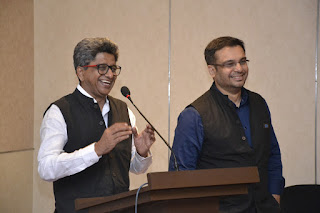 Rajesh Nema the host for the evening welcomed the guests and called upon Sandeep Zaveri, President LMAI to give the opening address. 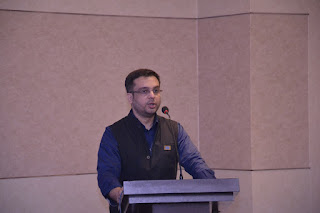 Sandeep stressed the imperative need for printers to put their minds together on this crisis like situation facing them. He stressed the need to shun reverse auctions and demand from customers a basic per square meter price below which no one should sell. He impressed upon members to debate, discuss and arrive at a consensus if not now then at least at the next meet that they plan on the issue. There is a pressing need for formulating a costing pattern that incorporates essential inputs besides labelstocks to justify the resultant profit to be enough to service their operations.
Satish Wakchaure of Saicom Systems and Samir Patkar from Gallus took the stage next. Their joint 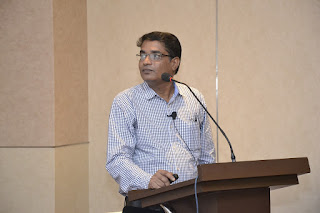 presentation listed the pitfalls at length and shared the dangers of low pricing in competition amongst themselves. While Satish listed the difficulties and shared the envisaged consequences in this path, Samir Patkar went about listing solutions to produce cost effectively with lesser downtimes, lower wastages, and stemming the outflow due to not using expensive equipment to optimum capacity. 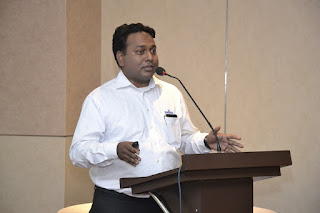 They summed it up by suggesting to printers the steps that would definitely help them improve their profitability. These included demanding development costs from customers, either shunning reverse auction or learning to say no beyond a certain point, investing in expansion wisely and planning reachable ROI with new generation equipment, using full capacity of machines, reducing wastages, produce better quality-not larger quantity, learn to say NO if it is unviable, do not settle for too long credit periods, do all finishing online as offline converting adds to cost and finally try to get a higher price for your work. 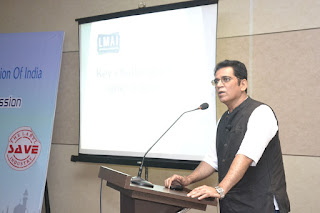 Taking the topic further Ajay Mehta MD, SMI gave his suggestions for label printers to drive in better margins and tighten their belts to stay in the reckoning. 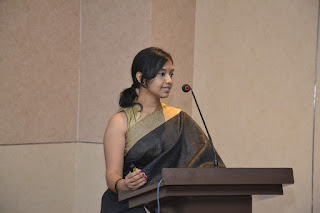 An eye opening presentation on the label printing companies was made by chartered accountant Deepa Lodha who was commissioned by LMAI to carry out this investigation. She had in-depth perused the financials of 77 label companies in India. The largest percentage at 42% of these 77 companies are located in the west followed by 27% in North, 23% in south and mere 8% in central and east India. Only 9% or 7 companies have a turnover of over Rupees 50 Crores, 31% are less than 5 Crores, 38% are between 5-20 Crores and 22% between 20 -50 Crores. The revenue growth of these 77 companies from 2013-14 to 2014-15 is 14% however this cannot be reflecting the exact growth rate in India as these companies are only printing in roll form. There is a huge, almost similar volumes coming from plain VIP labels and the sheet market. That market is experiencing substantial growth due to extensive use of barcodes in organised retail.  All the details of this report are difficult to reproduce in this article however I will share some key conclusions as below;
1.    Not enough Profit: Six companies out of 77 do not generate enough profit to pay their interest. One in every five reported loss at net level.
2.      Low asset turnover: 41 companies reported sales lesser than total assets.
3.   ROE: 6-8% improvement in ROE (return on equity) needed to make returns meaningful for promoters. They need to get 5-7% higher prices, tighter management of receivables/inventory and better utilization of assets.
4.      Efficiency needed: Few inefficient or loss making companies could exit business. 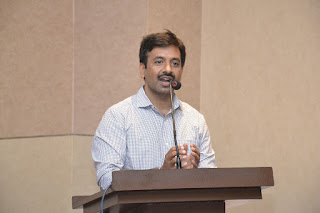 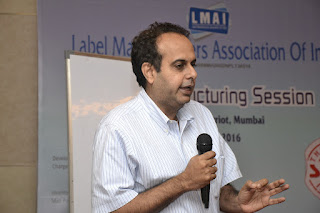 Vivek Kapoor took the interactive session inviting printers’ opinion and thoughts on the subject they were discussing. Renuka Uchil informed the gathering about forthcoming label awards and appealed to label printers to participate in big numbers. 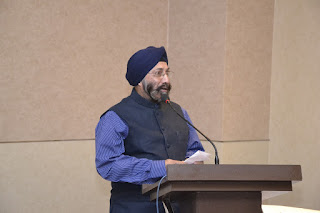 Harveer Sahni of Weldon on behalf of editorial board of Label Legacy, the LMAI publication, informed that the next issue would be released at Labelexpo India and would be a preview of the label event. He also appealed to the members to send in their news and articles that could be of interest to the industry.
Finally Rajesh Nema secretary LMAI gave the vote of thanks.

International Label Guru Mike Fairley commented on my above report! I reproduce his full email as below;

An interesting report. Shows the challenges the industry is facing. But it’s not just in India. A recent study of financial performance in the UK label industry gave the following:

•
More attention needs to be paid to financial management. Do companies really know the full cost of indirect costs/overheads

I’m working on writing a new handbook in our Label Academy series on ‘Management Information Systems’. Has key chapters on Estimating, Job Costing and Financial Management. Looks at how automated workflow through the label production chain from estimating, order processing, production planning, inventory control, quality control, costing and accounting can today eliminate time consuming data entry, planning, management time and work towards improved profitability.
I would expect to see more MIS systems being installed in India over the next few years. They can pay for themselves.
Hope you are well.
Best regards
Mike
Note for international readers: Rupees 1 Crore is equal to 10 million Rupees or at present rate of conversion approximately 150,000 USD
Note for print publications: Magazines may reproduce the above article by giving credit to the author.
Written by Harveer Sahni, Managing Director, Weldon Celloplast Limited, New Delhi. India August 2016