Nine years after a supermarket cashier in Troy, Ohio-USA, on the 26th of June 1974, scanned a barcode for the first time in history on a 67 cent 10 piece pack of Wrigley’s Chewing Gum, Prem Chand Jain popularly known as P C Jain, introduced variable data labels to India in shape of price marking labels. This was in 1983 as a precursor pioneering in barcode labels. Another seven years hence in 1990 he yet again led the country’s indulgence in producing and using barcode labels. This was almost 40 years after Norman Joseph Woodland and Bernhard Silver patented the barcode co-invented by them in the shape of conclavic rings of varying widths in 1951. Twenty years later in around 1971 George Laurer with support from Woodland, his colleague at that time in IBM, created the present day barcode. Barcodes have eventually become an absolute essential in modern day organized retail. The usage of barcodes that was initially limited to mega malls and retail stores have now found extensive usage in small local colony stores, industry, logistics, banking, travel and almost all segments of society. RFID (Radio Frequency Identification), another invention whose history can be traced back to 1940 during World War II, has also found application in variable information labels in recent times. Jain’s company Great Eastern Impex now renamed GreatEastern IDTEDCH Pvt. Ltd. which he heads as Chairman, has truly pioneered the introduction and proliferation of variable data labels in India! 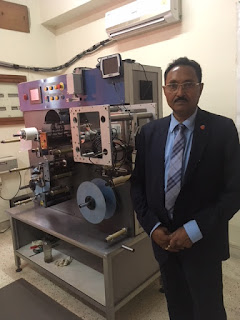 P C Jain was born in a family of hosiery traders in the small town of Patti some 45 KMs from Amritsar in Punjab. After initial schooling the family moved to Ludhiana, the industrial town of Punjab. Alumni of star college of Ludhiana, after his college education he took employment in a hosiery unit owned by the Oswal Group, where he worked for 3 years. He gained knowledge and experience of handling exports of yarn and imports of machinery, raw materials and equipment at a time when documentation and procedures were licensed, complicated and cumbersome. Coming from a family of businessmen, in 1966 Jain decided to venture out on his own. He took selling agency of some Ludhiana based hosiery companies and for the next 4-5 years he was selling for them to customers in MENA region countries. Nostalgically he reminisces that he used to carry two bags as baggage, one was always full of samples to demonstrate his offerings and book orders. He would never leave any city until the LC was established by the buyers who placed orders with him. There were times when he would even interact with buyer’s bank to expedite matters. Achieving a sale of 500,000 rupees at that time was a substantial amount with the exchange rate at just Rs.7.50 for one US Dollar! By 1975, he had made some good earnings and indulged further by starting exports of T-Shirts to UK, Germany and USA.  However when exports of these items became difficult due to quota restrictions imposed, he shifted focus. He started to import heat transfer presses and printing solutions to print on T-Shirts. His biggest customer then was the makers of Smash T-Shirts that gave him enough money to buy his own office in central Delhi’s Rajendra Place. 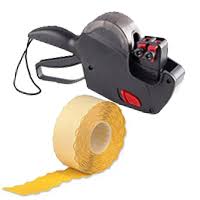 In 1983 he started Great Eastern Impex Co. in partnership with his brother in law. At that time he came in contact with Harjit Singh Kochhar of Giggles gift shop in New Delhi’s Connaught Place. This connection was the starting point of P C Jain’s journey into the world of variable information printing labels. Kochhar, during one of his foreign trips had bought a price marking hand labeler. When he ran out of labels he requested Jain who was experienced in import procedures, to help him import labels. Great Eastern Impex imported a full carton of price marking labels for Giggles from Monarch Marking Systems USA; that was their first indulgence in labels. The US based company Monarch saw an opportunity in Great Eastern Impex Co. and soon their sales person Cliff Cuttele landed in Delhi to meet P C Jain. He demonstrated the usage of labelers and how to open and load labels, Jain found it so interesting that they immediately headed towards Connaught Place to visit shops and asses the interest. Almost all customers wanted these machines. When they landed at Harjit Singh Kochhar’s shop Giggles, Kochhar was excited about the prospects of the business for his friend and took them all for dinner to his home and it was that day the decision was taken for Great Eastern Co. to be Monarch’s exclusive agent in India. In 1985-86, P C Jain and his brother in law decided to part company in business, so Jain in a new partnership with his clearing agent Prem Khanna and Surinder Singh Bakshi, a financer joined hands in their new venture GEIPL (Great Eastern Impex Private Limited) and became exclusive agents of Monarch Marking Systems USA for the next five years. They would import the Monarch Labelers and labels and distribute them. In 1986 A S Shekhawat who came from a publishing company joined GEIPL as a manager to expand their sales network and setting up dealership network across the country. 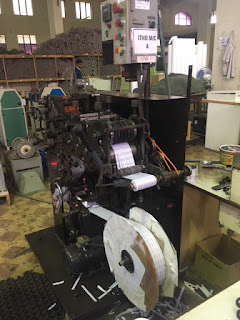 In 1991 GEIPL entered into a technical collaboration with Monarch to manufacture and sell labels in India with a Japanese ITOH label press that was re-engineered by Monarch in USA to their particular specifications to produce 5 different types of labels. This press was supplied by Monarch to GEIPL under a royalty agreement of paying 5% on sales to their foreign partner.  In 1992 Bakshi left the company leaving the reins of the venture in hands of P C Jain and Prem Khanna. In 1996 HSSIDC allotted to them a 2100 square meter plot in Gurgaon on which GEIPl built their double storied 25000 square foot factory building. By 1990 barcode usage had surfaced in India and GEIPL had already made up their mind to indulge. At almost the same time Shobhana Shah Dharia, an alumni of Wayen State University and working as a software engineer in Symbol Systems USA had migrated back to Mumbai India. She launched bar code scanning technology in the country to make complete Barcode solutions available.  With GEIPL being the first entrant in the trade to offer barcode labels and printers and Dharia offering scanning solutions the Barcode, the technology was available in totality. Proliferation of Barcodes started and by 1995 it was fully developed and being widely used.  There were two organizations that were offering barcode symbologies i.e. EAN or European Article Number from Europe and UPC or Universal Product Code from USA. GEIPL opted for adopting the European symbology. 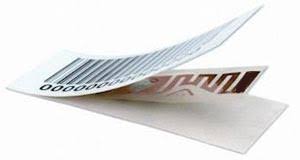 IIP (Indian Institute ofPackaging) was identified by Ministry of Commerce, Government of India, for establishment of EAN India for the introduction of Bar Code Technology for export in India. The then Director of IIP P V Narayanan called a meeting in this regard and it was attended by  P C Jain, Shobhana Dharia and Sameer Parikh of Intellicon. It was decided to first form EAN India with license from EAN Europe and supported by IIP and Ministry of Commerce. In 1990, the country code 890 was allotted to India followed by the manufacturer’s code. The typical configuration of a barcode is; the first 3 digits is the country code followed by manufacturer’s code issued by EAN India and then the product code. The barcode becomes complete when the last check digit is added. Eventually to bring global uniformity in language controlling barcodes business, in 2005 EAN and UPC merged to create one body called GS1(Global Standard1) worldwide. In India the business is controlled by GS1 India covering all Indian manufacturers from segments like retail, Pharma, automotive, fmcg, cosmetic, liquor, etc. By the start of new millennium GEIPL had added another unit called Rachna Overseas Pvt. Ltd (ROPL) in its fold. ROPL was formed with wives of P C Jain and Prem Khanna as partners to produce thermal transfer ribbons for barcode printers and to be supplied to GEIPL. 16 years after being together as partners in 2002, Jain and Khanna, over a luncheon meeting decided to split amicably. ROPL was taken over by Prem Khanna while GEIPL remained with P C Jain. 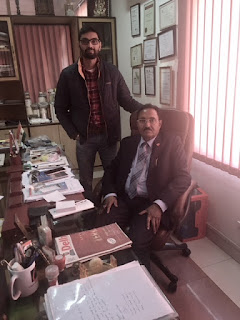 P C Jain’s wife Usha is a home maker, their only daughter Ekta was born while they lived in Ludhiana. Ekta is now married and her husband is in business manufacturing injection molded cones for textile mills with factories in Ludhiana and Bhopal. Their son Shakti was born in Delhi in 1977 who, after schooling in St. Marks School Delhi, graduated in commerce from Venkateswara College New Delhi and followed it with an MBA in finance, sales and marketing from Rochester School of Technology in 2001. Shakti now manages the company as Managing Director while his father is the Chairman. Proudly P C Jain says, “Under Shakti Jain’s leadership the company’s sales that had initially dipped after division of assets amongst erstwhile partners, has doubled”! Carrying his father’s vision of moving ahead of time, Shakti foresaw that RFID labels will be the future. In 2012 Shakti and his wife Neha, who is now the Executive Director in the company, visited Spain to be trained in RFID technology and to see the RFID inlay insertion machine. In yet another pioneering step they bought this machine and became the first Indian label company to offer RFID Self adhesive labels. At this time they even changed the name of their company to Great Eastern IDTech Pvt. Ltd. so as to project its modern approach and indicate their digital offerings.  Great Eastern has had steady and smooth operations however the only challenge came when they took up a complete barcode and RFID project for Government’s warehouse management systems. They had estimated to complete the project in 3 months and it kept on getting delayed due to technical issues. Persistent efforts helped them achieve success in implementing the systems in one year. Their biggest order came when they supplied, installed and commissioned 2500 barcode printers to HDFC Bank in all their branches, some in distant places. 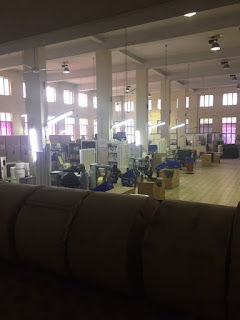 Great Eastern IDTech Pvt. Ltd. now has their manufacturing facility spread over 25000 square feet with 135 employees. They have five offices besides their head office in Gurgaon. These are at Bangalore, Chennai, Pune, Mumbai and Kolkata. Sales that fell to Rupees 10.00 Crores after the split between partners in 2002, but after achieving a steady growth over the following years, it is expected to reach Rupees 32.00 Crores by 31st March 2018. Two third of their business comes from consumables and one third from hardware and software. Barcode technology accounts for 85% of sales, RFID 5% and price marking is 10%. They sell 200,000 square meters per month of thermal transfer ribbon, convert 150,000 square meters per month of labelstock and sell 1 million RFID labels per year. Visualising future the father son duo expresses that by the year 2020, they will reach a turnover of Rupees 50 Crores just by organic growth. 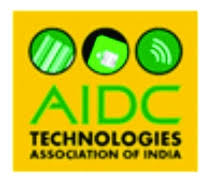 In progressing years P C Jain has tried to give back to the industry and society that gave him success and recognition. Other than spending his quality time with his best friend, his grandson Samar Jain, he is involved with many charitable institutions. He initiated the formation of AIDC (Automatic Identification and Data Capture) Associationof India and was its founder president for the first two terms of 3 years each. The association was started with just 30 members and has now grown to 150 members with pan national presence. In 2012 the AIDC Association at its annual conference in Kovallam resort Kerala, conferred upon P C Jain the “Lifetime Achievement Award”!
Written by Harveer Sahni, Chairman Weldon Celloplast Limited, New Delhi February 2018
First published in Printweek India.