Label manufacturers association of India LMAI, is now an association that is vibrant and astir!
It was September 2015 when a new young President Sandeep Zaveri took over the reigns of the association. In November south India’s biggest metro city suffered a calamity whereby the city was inundated by floods leaving many homeless and in pitiable state. Sandeep took upon himself to collect kits that would help sustain life for a few days till normalcy retuned. He was in Chennai himself distributing to those who had suffered. In early December 2015 on the sidelines of Pamex, a print and packaging show, LMAI organized a networking event at Hotel Courtyard by Marriot, Andheri, Mumbai where they also announced that soon LMAI will launch its own magazine “Label Legacy”. The event was attended by leading printers and suppliers, some of whom travelled from different parts of the country to also be at Pamex. On January 22nd 2016 LMAI organized a very successful and well attended Technical workshop and networking event at New Delhi’s prestigious Chelmsford Club. The show was a full house and highly appreciated by the attendees. At this event Sandeep Zaveri announced similar Technical Workshops at Bangalore and Ahmedabad. 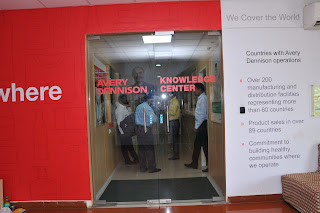 The Bangalore event on 15th of April 2016 was a busy full day program. The day began at the Avery Dennison Knowledge Centre where at 10am, 45 LMAI members gathered for a visit to understand the nuances of flexographic printing.  Sridhara Gopalakrishna Zonal Manager South & East of Avery Dennison received the guests. After delivering safety instructions to be observed within the knowledge centre, the printers were split into two groups to tour the centre. 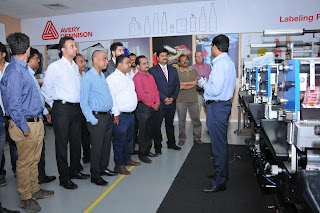 The printers got to appreciate the variety of labels displayed there with information on the user segment they were intended for and knowledge to select appropriate substrates. This was followed by demonstrating the art of using graphic software to highlight, sharpen, soften or alter images before proceeding to plate making. Information was also imparted on the plate making process and the impact of plate thickness on printing. Infact the full pre-press procedure upto plate making was explained. 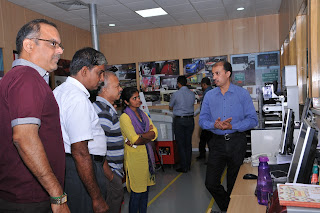 Finally the process of checking the plates and correctly mounting them on the press was demonstrated followed by actual printing, foiling laminating, die-cutting on a running press at high speed while also controlling wastages. Welcoming the group Sridhara thanked Sandeep and the LMAI on behalf of Avery Dennison for coordinating and bring a large number of printers to the knowledge centre. Lunch was served to the visitors by Avery before the group left by two mini busses on to their next sojourn. 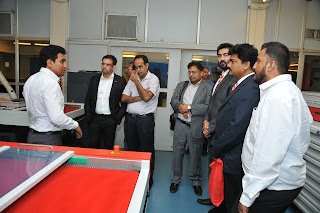 The next stop was VeePee Graphics, a premiere pre-press service provider. Jai Prakash Peethambaram, partner VeePee, his wife and daughter welcomed the guest and took them around the facility to showcase their capabilities in prepress. It was time then to congregate at 6 PM for the Technical workshop at The Paul, Bangalore. 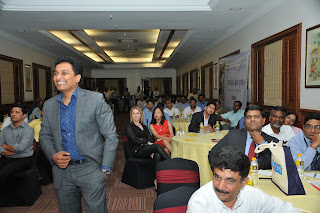 The Technical workshop was attended by 125 delegates. Speaking at the event Khushal Patel from Shailesh Kumar Sharma, senior manager-technical, Flint Group India, enlightened the delegates on the quality aspects of inks as well of the role of UV light in curing. He also mentioned that the present UV curing scenario was undergoing transformation leading to the implementation of LED UV technology as a more stable and futuristic one. Other presentations were made by Arun HS of Esko Graphics and Vikas Sharma of Yes Bank.

BST explained the importance of 100%defect detection in label printing and how it improves customer confidence in label suppliers. He explained in detail the defect detection process, its technology and dwelled on the choices available. Sanjeev Atre of PGI technologies Aurangabad

nostalgically narrated the path traversed in the last 14 years from being a narrow web label printers to becoming the only internationally recognized tooling manufacturer from India. His journey he stated, into the production of tooling was inspired by none other than LMAI past president Manish Desai of Mudrika Labels. He spoke about the usage and requirements of good toolings in label conversion and the pitfalls if care is not taken in selecting the toolings like magnetic cylinders and print cylinders. Laxminarayanan of Rotometrics spoke on the Precision in Rotary Die cutting Clearance. He explained in depth the importance of the clearance which is the difference between the height of the blade and the height of the bearers and that this is what controls the depth of the cut. To determine the proper clearance the exact thickness or caliper of the liner is required. He also explained how die cutting takes place dwelling on blade height, blade angle and the impact of liner thickness on a perfect die-cut or a through cut.
Surprise visitors at this event were Labelexpo Managing Director Lisa Milburn and show director Jade Grace. Jade went on stage to give information on the upcoming Labelexpo, later this year in Greater Noida. Leading printers from South India who came to the show were Raveendran from Seljegat Sivakasi, Narasimha Subramanium from Essae technologies Bangalore, Dhanasekar from Protocol Solutions Chennai, Subba Reddy from SGRE Bangalore, besides many others. Printers who travelled to attend this event from other parts of the country included Sanjay Purandre of Shree Ganesh Graphics Mumbai, Anurag Mohan from Interact Kolkata and Arun Gupta from Wonder Polymers Delhi.
The workshop ended with networking cocktails and dinner. 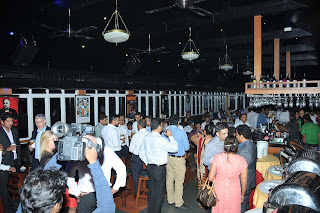 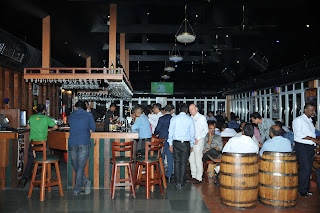 On 23rd of April LMAI organized yet another event, this time to felicitate Anil Sharma, Managing Director, South Asia & Sub Saharan Africa, Avery Dennison Materials Group who is shifting to Avery, Singapore from New Delhi to handle bigger responsibilities, at Hotel Courtyard Marriot, Andheri, Mumbai. The event was attended by leading printers from across the country. Speaking at the event, Sandeep Zaveri reminisced about the support that Anil Sharma had extended to LMAI during his six year tenure in India. He remarked about the LMAI-Avery partnership for various events for the benefit of the Indian label industry and thanked him for his endeavours in growth of labels in the country. In response Anil spoke on his transformation from managing a soap business at Hindustan Lever to the label and packaging industry. He went on to dwell on the fast developments, changes and innovations in the print and label industry. 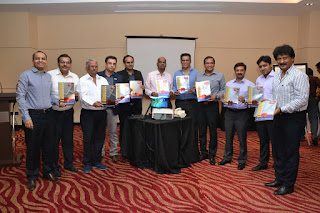 Some of those who paid glowing tributes to Anil included Past President LMAI Vivek Kapoor, former General Secretary R L Deshpande, Gururaj Ballarwad of Wintek, and Kuldip Goel of Any graphics. Some of the other leading label printers present at the event were Amar Chhajed from Webtech-Huhtamaki, Sanjeev Sondhi from Zircon Technologies, etc. Supplier members included Ajay Mehta of SMI and Amit Sheth Label Planet besides others. Pankaj Bhardwaj, director for South Asia, labels & packaging materials at Avery who will be taking Sharma’s place at Avery’s India operation assured LMAI, continued support. 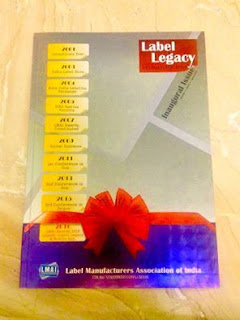 LMAI also used the occasion to launch the maiden issue of their magazine Label Legacy that has been compiled by joint efforts of many members and the editorial board. The quality of the magazine and its content were appreciated by all. The magazine design and printing is the result of painstaking effort of Kuldip Goel of Anygraphics, where the magazine was printed.

LMAI has yet another Technical Workshop coming up on the 14th of May 2016 at Hotel Novotel, Ahmedabad. Sandeep Zaveri is a man on the move, making LMAI an interactive pan national association creating bonds and platform within the industry to share thoughts and technological developments with industry peers. Platforms that bring the industry constituents together contribute to the growth in the industry. We already look forward to more news from the President!