On July 21 2016 when I received information that PackPlus 2016 had been sold out I tweeted; “Sold out! PackPlus 2016 July 27-July 30 Pragati Maidan, N Delhi Show heading for unprecedented success http://www.packplus.in  @PackPlus2016”

The show PackPlus, a complete packaging show, has grown more than 30 percent over the last edition with many more exhibitors, product launches and running machines. While there, one can learn about Package 4.0 at the AIA knowledge pavilion (stall no. 12A.40). There are free seminars on Next Generation Automation, Flexible Packaging, Open & Smart HMI, and Integrated & Vision Guided Robotics & Vision System for Quality. Register at: www.aiacampus.in/index.php/industry/automation-pavilion/click-to-register HP is planning free seminars for brand owners at their stand in Hall 12. The timings are at 4pm on 27 and 28 July and at 11 am on 29 and 30 July. In the gross area of 14,000 sq.mtrs., PackPlus will be happening alongwith SupplyPlus and CartonTech. The Show has positioned itself as one of the most sought for exhibitions for the display of latest innovations & developments from the industry. Some of the leading companies including Uflex Limited – Engineering Division, Pelican Rotoflex (P) Ltd., Ishida India (P) Ltd., Global Link Impex, Zhongke India (P) Ltd., Clearpack India (P) Ltd., Autoprint Machinery Manufacturers Pvt  Ltd., Hewlett – Packard India Sales Private Ltd., Intralox India (P) Ltd., AnyGraphics (P) Ltd., Domino Printech India (P) Ltd., Uflex Limited – Holography Division and many more have booked prominent stalls to showcase their wide range of equipment and to disseminate information. Visitors will get an opportunity to experience the running machines and have one-on-one interaction with the representatives from international companies
PackPlus is founded and organized by the husband wife duo Neetu and Anil Arora. They also happen to be the founders of India Label show which was subsequently acquired by UK based Tarsus and renamed as “Labelexpo India”. A decade ago I wrote about Anil Arora’s journey upto Labelexpo 2006. In 2007 it was acquired by Tarsus and for the 2010 edition they renamed it as Labelexpo India. I reproduce that article after moderate editing;
The path traversed by Neetu and Anil Arora:
It was during one of my visit to Mumbai in the year 2001, while planning a trip to Labelexpo Brussels with friends from Industry, I expressed my wish that we should have a label show in India. Immediately one of the label printer friends informed that one Mr. Anil Arora was already working on the project and had approached many in the industry in Mumbai. Since the subject was of interest to me I investigated and got Mr. Arora’s contact details. Before leaving for Delhi I called Anil Arora to enquire about his plan for the show. From the small chat with him I found him very convincing. I felt this man was committed to the show and would make success of it. I told him I would support him and if any help was needed I would be available. Three days later Anil was in my office in Delhi and we were discussing plans to make the show a big success.
By end of the year the whole industry was excited about the show and the first India label show was completely sold out. So much so that the organizer had to vacate their own stand to make room for demanding prospective exhibitors. The show was a big success.  It brought the industry closer and it was first time in the history of self adhesive labels in India that such fellowship was witnessed. It was also during the run-up to the show that the LMAI (Label Manufacturers Association of India) was formed.
The show then moved on to a much bigger Pragati Maidan. Anil Arora and his better half Neetu Arora worked hard to make the show bigger and better. The promotions were so well planned that road shows which gave insight on what to expect, were held in cities and towns all over India. There were road shows held in Srilanka and Bangladesh also. The second show in Delhi was bigger and better with the Tarsus group organizer of Labelexpo taking a big portion of the show. The India label show brand was fully established not only in India but also internationally. There are nostalgic memories of the awards nights and the parallel dinner meetings during the last show.
The third show in this series was held on (6-9 December 2006); the excitement in the label industry had built up. The show was bigger and attracted a much larger foreign attendance. The importance of the show was reflected by the fact that the Finat sponsored “Indo-European label Exchange” was held alongside the show. FINAT, the self-adhesive label trade association acted as ‘matchmaker’ between European and Indian labeling industries to create a forum to give small and medium sized member companies in both regions better chances of doing business with each other. The forum was supported by the EU’s Asia Invest programme and was organised in cooperation with the national trade associations VskE (Germany) and LMAI (India). More international presence, more working presses and a series of product launches from an industry that was waking up to global challenges confirmed the show’s resounding success. A conference was also held alongside the show, and was organized under the aegis of the world renowned Alexander Watson Associates (AWA).
Alongside the Show, International Packaging Conclave will happen on 29 July at Pragati Maidan Conference Centre. It will focus on Print Optimisation & Colour Management for Flexible Packaging. 25+ experts from the industry will unite for a daylong session where more than 200 delegates including Brand Owners, Package Converters, Packaging Technologists, Procurement Professionals, Print Specialists, QA, Managers, Pre‐Press & Media Professionals, Designers, Material &Equipment Suppliers and Consultants will attend the programme. We are all set for a record-breaking edition,” said Neetu Arora, President, Print-Packaging.com (P) Ltd., the organisers of the Show. 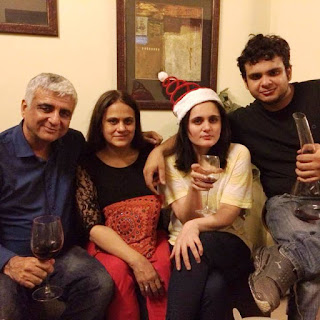 Neetu and Anil have two children, a son Nauroze pursuing his management studies and a daughter Garima Arora who is a celebrated Chef. After training in Switzerland and France she has worked in the famous Gordon Ramsey’s restaurant in Dubai, then in the world’s number one restaurant Noma in Copenhagen and is now working at the best Indian restaurant recognized globally; Gaggans at Bangkok. She is soon expected to open her own restaurant in Bangkok with support from Gaggans.